They've got their hands on the premiership, and now Canberra FC have set their sights on claiming the prized Canberra premier league treble.

Canberra held their place at the top of the league with a 2-0 win over Canberra Olympic in the final match of the regular season at O'Connor Enclosed Oval on Sunday. 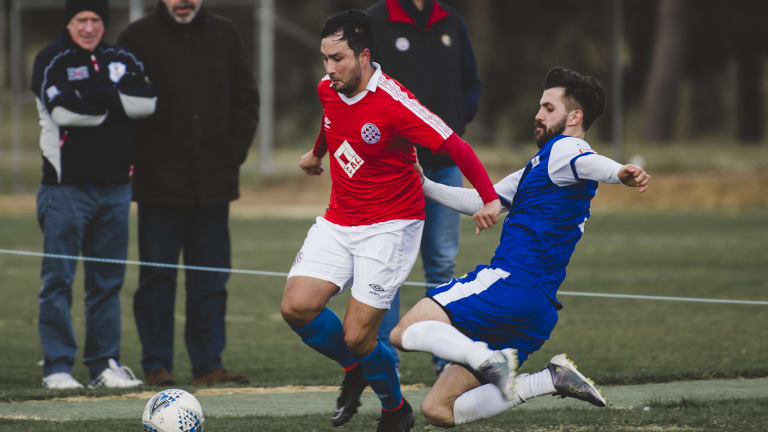 It means Paul Macor's side has finished five points clear on top of the table to claim the premiership, having already won the Federation Cup which granted them entry into the FFA Cup round of 32 earlier this year.

The championship is next on Canberra's radar, but Macor isn't getting too carried away by the prospect of a grand final appearance.

They have to get through Olympic in the major semi-final first, with the Cooma Tigers and Tuggeranong United snapping at their heels as they prepare to square off in the elimination final.

"This is our second trophy this year, don’t forget we won the FFA Cup final, so now we’ve got the premiership which is the most rewarding one because it’s for the most consistent throughout the year. It’s the one that I wanted," Macor said.

"It does [put us in position to have a crack at the treble]. But every one of the top four can win the grand final, it’s a matter of who turns up on the day is the best team.

"We’ve got Olympic again next week, I haven’t really thought about that. I’m just soaking it all in."

Canberra's win denied Olympic a chance to secure a third-straight premiership, and Macor says the game plan was simple: take your chances and park the bus.

That's exactly what they did as Marko Vrkic finished past Mason Interlandi's near post to open the scoring for the visitors and put his side in the box seat.

Olympic had right of reply and the first of two chances went awry after Stephen Domenici fed a ball straight into the waiting arms of goalkeeper Jordan Thurtell. 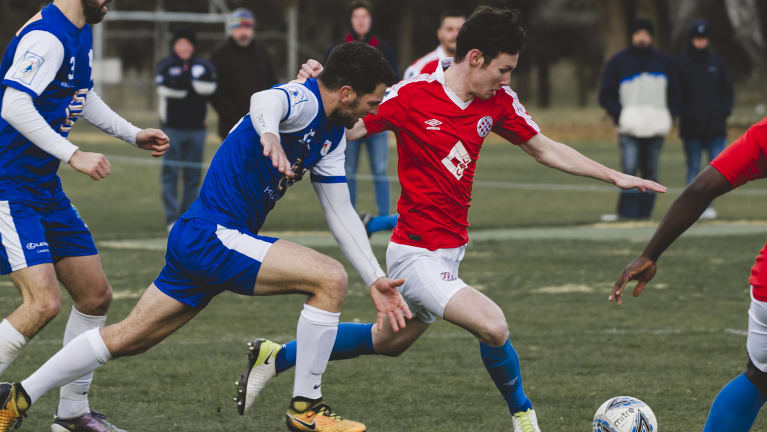 The next one hurt the most, as Roko Strika rocketed a free kick over the crossbar. A minute later Canberra doubled their advantage through Kofi Danning.

Down by two heading into the final half of the regular season, Olympic needed to pull something special out of the bag if they were to sneak away with another league title.

But it wasn't to be, and things went from bad to worse when Olympic’s Nik Popovich was carried off the pitch before Strika picked up a booking for an ill-fated challenge on Matthew Waters.

"We went in there with a plan that Olympic had to come out and score obviously, because they needed to win to get the premiership," Macor said.

"All we needed to do was just sit back and take our chances, which we did, and it worked out well. It was a great performance from the team, a good squad performance, so I’m very happy.