The Canberra A-League bid have signed 5000 members less than a month after launching and they now want to double that number. 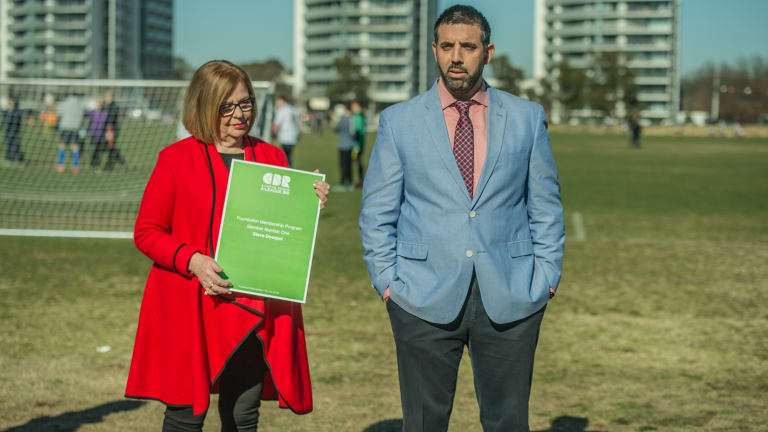 The Canberra bid team will submit its final application to Football Federation Australia on August 31 and hopes to be one of two teams added to the A-League on October 31.

They're up against eight rivals bids after two of the three Sydney teams joined forces on Monday, with South West Sydney Football Club and United for Macarthur forming a super bid.

Canberra's team are firmly focused on their own bid and signing as many members as possible, while also working to secure government and private funding.

The ACT bid are in talks with two European clubs who play in the Champions League to form a partnership similar to Manchester City and Melbourne City.

Canberra bid leader Michael Caggiano has been meeting with investors several times week over the past three months and is close to securing some "game-changing" deals.

Caggiano remained confident of partnering with several the heavyweight investors and said there was no reason they couldn't hit 10,000 members by the end of the month.

“We knew this was a region crying out for a professional men’s football team to support, but the speed at which this target has been surpassed has surprised even me,” Caggiano said.

“It reflects the amazing reception this bid has received from local grassroots football fans.

"We now have more than 100 volunteers helping with the bid, around 120 people attended our community forum last week and I’ve lost count of the amount of local businesses offering assistance.

"We are picking up more momentum every day and the sky is the limit now.

“This will be the Australia’s most community-orientated professional football club and I encourage every football fan across the region to sign up."

Caggiano has already partnered with the Australian Sports Foundation to help drive tax-deductible donations for the expansion club.

Several AFL, NRL and Super Rugby clubs work with the foundation – which has raised $150 million in the past four years – but Canberra would become the first A-League club to join.

“I love the A-League and have always had to travel great distances to attend matches, so the idea of having our own local team to be passionate about is really exciting,” Lam said.

“After I read about the inclusive community focus of this team, I didn’t hesitate to join."