Canberra United will shift its base to the University of Canberra, paving the way for the W-League side to join a sporting hub and reigniting plans for an expansion of facilities in Bruce.

The university and Capital Football will announce the deal on Thursday as part of a front-of-jersey sponsorship arrangement for the W-League season. 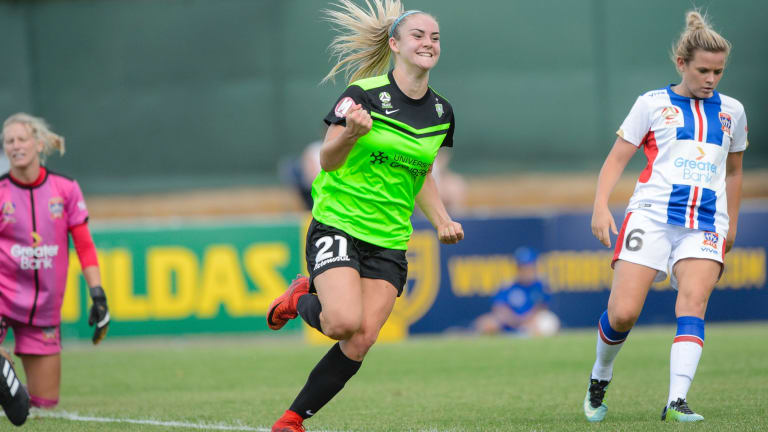 Canberra United is hopeful Ellie Carpenter will return to the capital.

Canberra United will move away from the fields and office at the AIS to relocate to the building which already houses the ACT Brumbies and the Canberra Capitals.

The university had plans four years ago for an almost $50 million upgrade of its sporting commons area, which would have included an indoor venue, and a boutique soccer venue.

Those plans have been on hold, but the W-League's shift from the AIS to the university could reignite talks to develop the best sporting campus in Australia.

Canberra United will likely train on the field adjacent to the Capitals' basketball court and the Brumbies' facilities, and have access to the sports science, gym and recovery facilities.

University vice-chancellor and Deep Saini said: "We have enjoyed a long and successful association with Canberra United and this new arrangement is testament to that.

"…Our world-class sports facilities are the envy of our peers. The facilities we offer teams who call our campus home provide a foundation for success – on and off the field.

"We’re looking forward to watching Canberra United closely and wish them well in their pursuit of further W-League glory. We’ll be there every step of the way."

The shift away from the AIS comes as the once-proud sporting campus comes to grips with a new beginning as part a of a new national sport plan.

ACT Labor MP Andrew Leigh has launched a petition to stop job cuts at the institute after it was revealed AIS bosses were cutting up to 40 positions.

"The Australian Institute of Sport is under threat due to staffing cuts and neglect," Leigh wrote in the petition.

"Since the Coalition got into government in 2013, the number of Canberra-based staff fell from 173 to 140. It has lost 70 sports specialists, and executives have indicated that there are more losses to come.

Several sporting bodies have chosen to move their operations to other parts of Australia and many have avoided using the Institute altogether.

"Visitors lament that the campus is more like a ‘ghost town’ than a place where you can witness the next legend being made."

The AIS will still have a presence in Canberra, but it will likely exist on a much smaller land footprint than the current 64-hectare base.

AIS officials still want to host camps and maintain fields, but have shifted its focus to sports science and being a world leader in neglected areas of sports.

A partnership between the AIS and University of Canberra has been floated as a way to ensure the sporting campus continues to evolve and remain relevant.

It's unclear if a partnership will be finalised, but the AIS is investigating its options. One of those options is selling its major assets – Canberra Stadium and the AIS Arena – to the ACT government.

"Without specialised staff and a clear, consistent and transparent strategy that gives the Australian Institute of Sport its driving direction, it cannot fulfil its role of fostering world class athletes, Leigh wrote.

"The Australian Institute of Sport must be taken seriously and properly resourced if our budding athletes are expected to succeed."

Meanwhile, Canberra United coach Heather Garriock is rebuilding her side and is expected to make more player announcements in the coming weeks after deciding to make a major personnel change.

Canberra has recruited South African duo Refiloe Jane and Rhoda Mulaudzi to boost the young side, but the leading goal-scorer in W-League history, Michelle Heyman, won't be returning and Caitlin Munoz's future is unclear.