Playing at the MCG will hold no fears for Geelong when they attempt to end Richmond's winning streak at the home of football on Friday night and cement a spot inside the top eight.

In what will be Geelong star Gary Ablett's first Friday night game at the MCG since the 2010 preliminary final, the Cats are ready for the prime time battle. 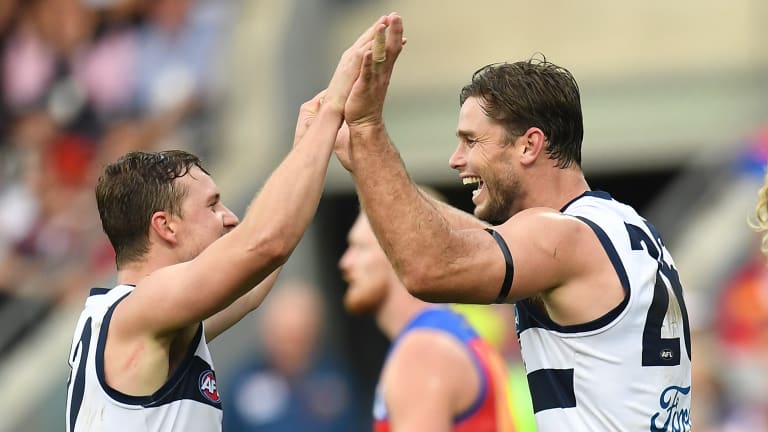 The Cats are confident ahead of their meeting with Richmond.

Cats coach Chris Scott says his side will meet the challenge of playing the Tigers in what looms as an epic battle.

"The stakes are obviously pretty high for us but whatever happens I am confident that we were proactive and on the front foot and had a good crack as opposed to hoping things will go our way," Scott said.

The Tigers have won 18 in a row at the venue, defeating Geelong twice at the MCG during that sequence.

Geelong have won two games in five appearances at the venue in 2018 and trained at Deakin University – which has the same dimensions as the MCG – this week in preparation for the contest.

Scott admitted they would like to play better at the finals venue but said it wasn't a huge factor in their preparation.

"The venue doesn't hold any fears for us," Scott said.

The Cats have won two and lost two at the MCG in the past two finals series with one of those losses to a rampaging Richmond in last year's qualifying final.

They two teams met at the MCG in round 13 and were locked together at three quarter-time before Richmond surged away with four goals to one in the final quarter.

Geelong have five inclusions since that game with Scott Selwood, Cam Guthrie, Dan Menzel, Lachie Henderson and Quinton Narkle replacing  Zach Guthrie, James Parsons, Cory Gregson, Lincoln McCarthy and Jordan Murdoch, however they will need to find an inclusion with Tom Stewart set to miss with an ankle injury.

In contrast the Tigers were missing David Astbury through injury and will once again be without Dion Prestia while Liam Baker and Jacob Townsend are back in the side for the injured Dan Butler and Reece Conca. Ryan Garthwaite replaced Astbury and Jack Graham has been in and out of the team.

Scott said the Cats had great respect for Richmond but the prospect of playing them was not intimidating.

"They have won that many at the MCG for a reason. They play the ground very well," Scott said.

"It's more a product of them being a very good team as opposed to them playing the ground particularly well.

Scott said the centre clearance battle would be a big factor in determining the result and he admitted the Cats had released the shackles slightly since playing the Tigers in round 13.

They have scored two goals more per game on average in the five games since that match although they have conceded more scores too.

"We're of the view that especially against the best teams – and Richmond are clearly on the top of that group – you need to have the capacity to score and put them under pressure because if you just try to hang in and protect the back half against them the weight of numbers can tell in the end," Scott said.