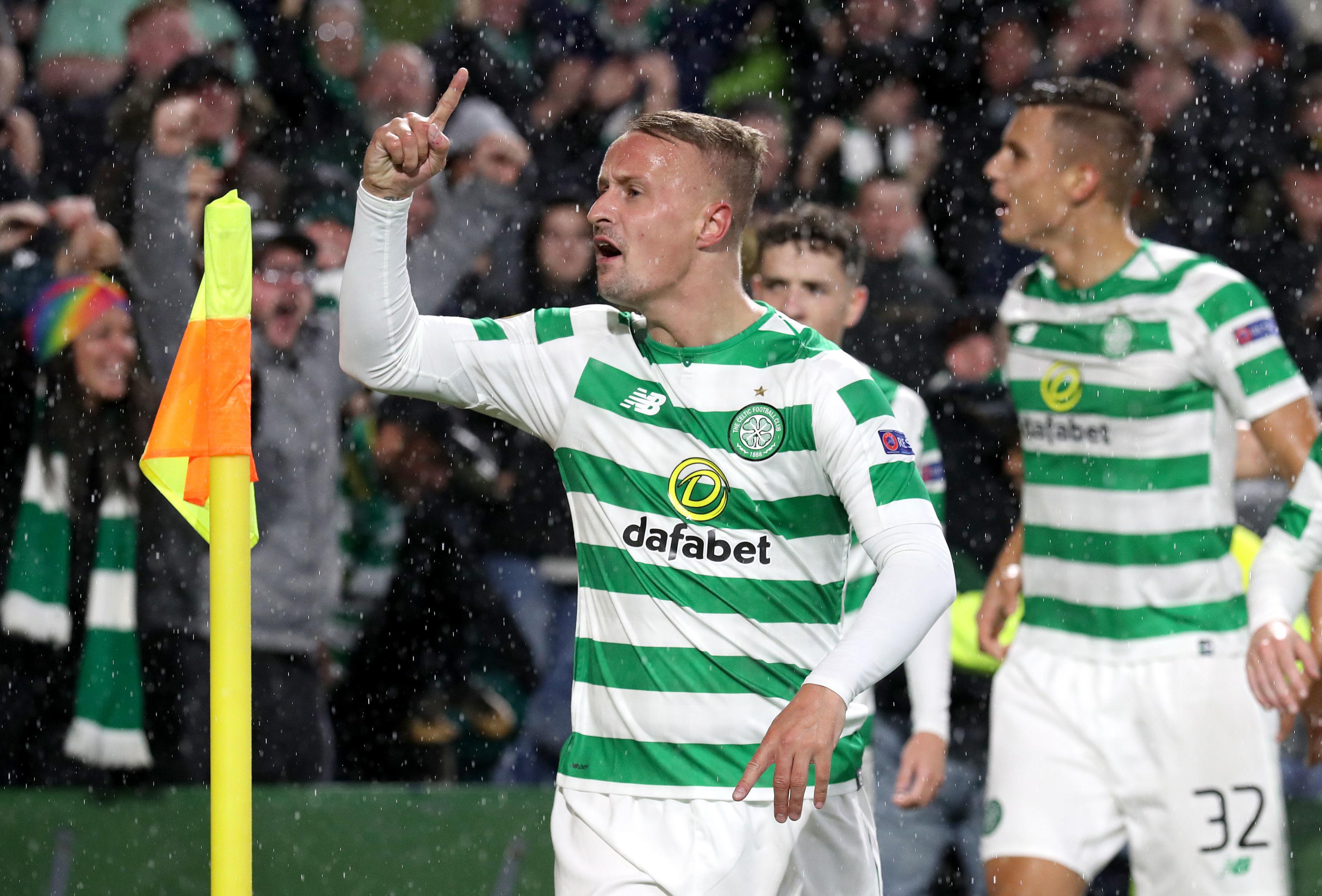 Many parts of Britain were sadly left destroyed by the weather.

Celtic had huffed and puffed for 88 minutes.

But the force of Griffiths was too much for the Norwegians to withstand. 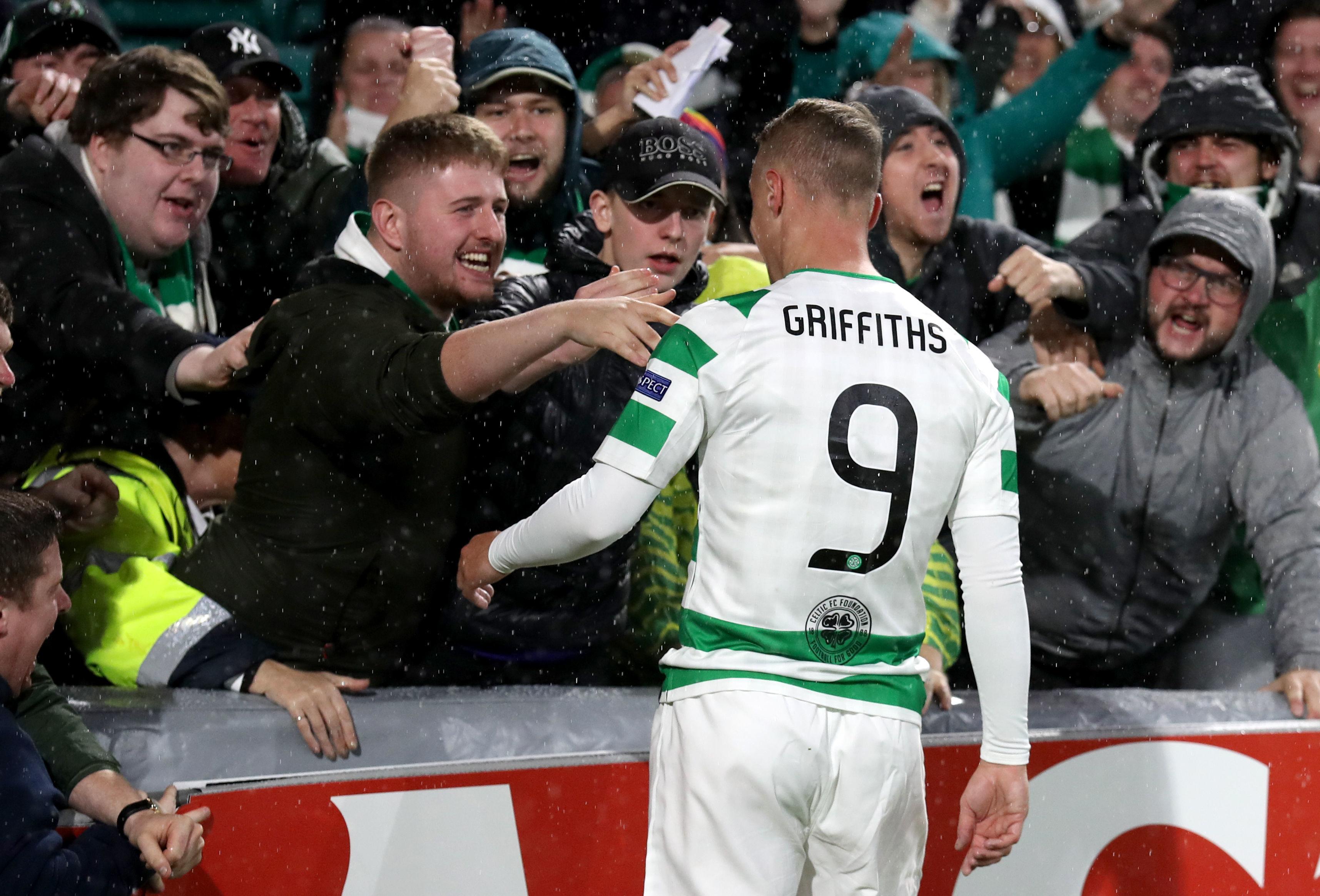 Griffiths, though, once again found himself benched but it’s one thing giving Scotland boss Alex McLeish a bit of public flak, it’s altogether another his club gaffer.

The Hoops badly wanted three points to open the group stages – and Griffiths went into the game with as many already secured, courtesy of a speeding conviction.

He’d earlier attended court in Dundee and in addition to the points on his licence got a £200 fine.

Brendan Rodgers restored Mikael Lustig to his side with Kristoffer Ajer missing against his compatriots with a viral condition. 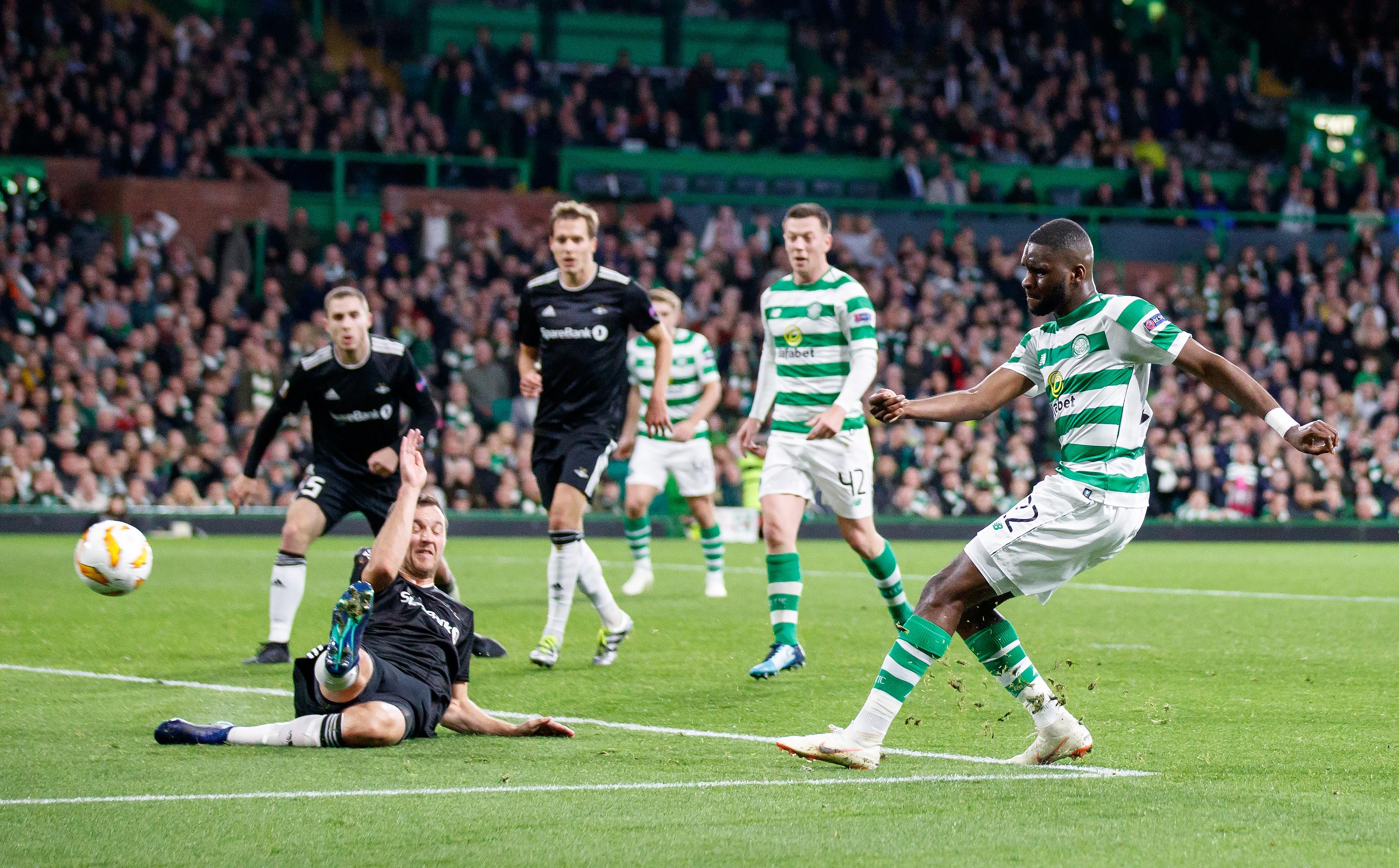 Celtic have faced Rosenborg more often over the last 14 months – this was their FIFTH Euro clash – than they have some Premiership opposition.

And there was a need for them to show a far more convincing display than they’ve generally managed so far this term.

But they failed miserably – until Griffiths entered the stage.

In fairness to the Celtic support they’d turned up in bigger than expected numbers for a competition that doesn’t set the pulses racing.

The apathy for this competition was actually more obvious in the VIP directors box seats – plenty of them empty because, well, it’s not the Champions League.

Rosenborg won a corner after just 30 seconds but like they’d been in the summer qualifiers in UEFA’s premier tournament they were a neat and tidy team with little threat where it matters. 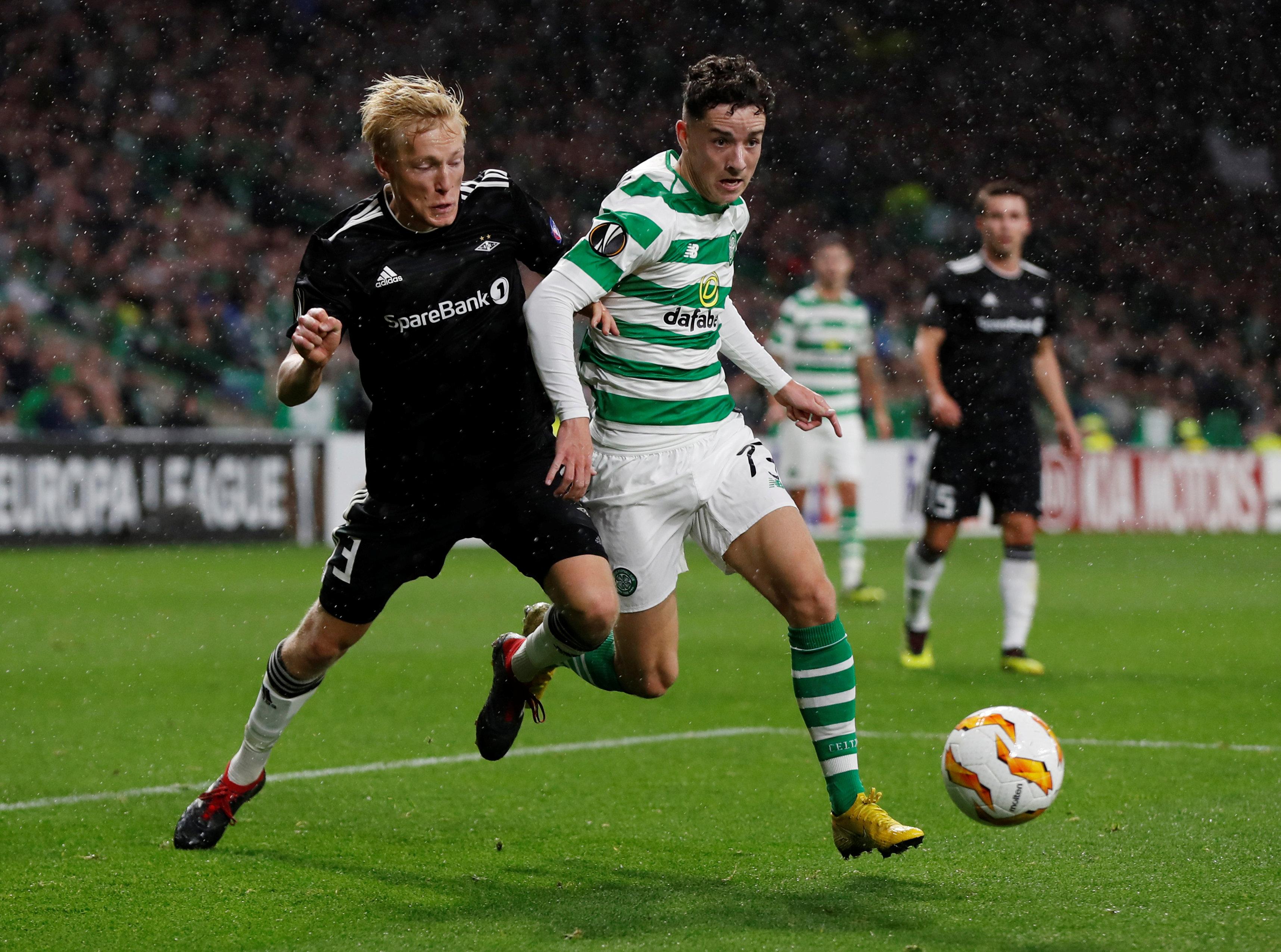 Fifteen minutes in, however, you thought they’d earned a stonewall penalty – Lustig’s trailing leg followed by the talented Issam Jebali going down heavily.

But unimpressed Polish ref Pawel Gil chose instead to book the Tunisian schemer for diving and TV pictures appeared to show it was a great call.

Yet, it still highlighted a vulnerability in Lustig to quick footwork, which Jebali sure possessed – also beautifully nut-megging Scott Brown early in the game and throughout catching the eye.

The Swedish defender, though, caused the first worry of the night for Rosenborg No1 Andre Hansen – his 22nd minute downward header from a Callum McGregor forcing the keeper into a save.

Sixty seconds later Tom Rogic put Odsonne Edouard into the box with a slide-rule pass but the French striker blasted well over the bar from 14-yards. It was a decent chance. 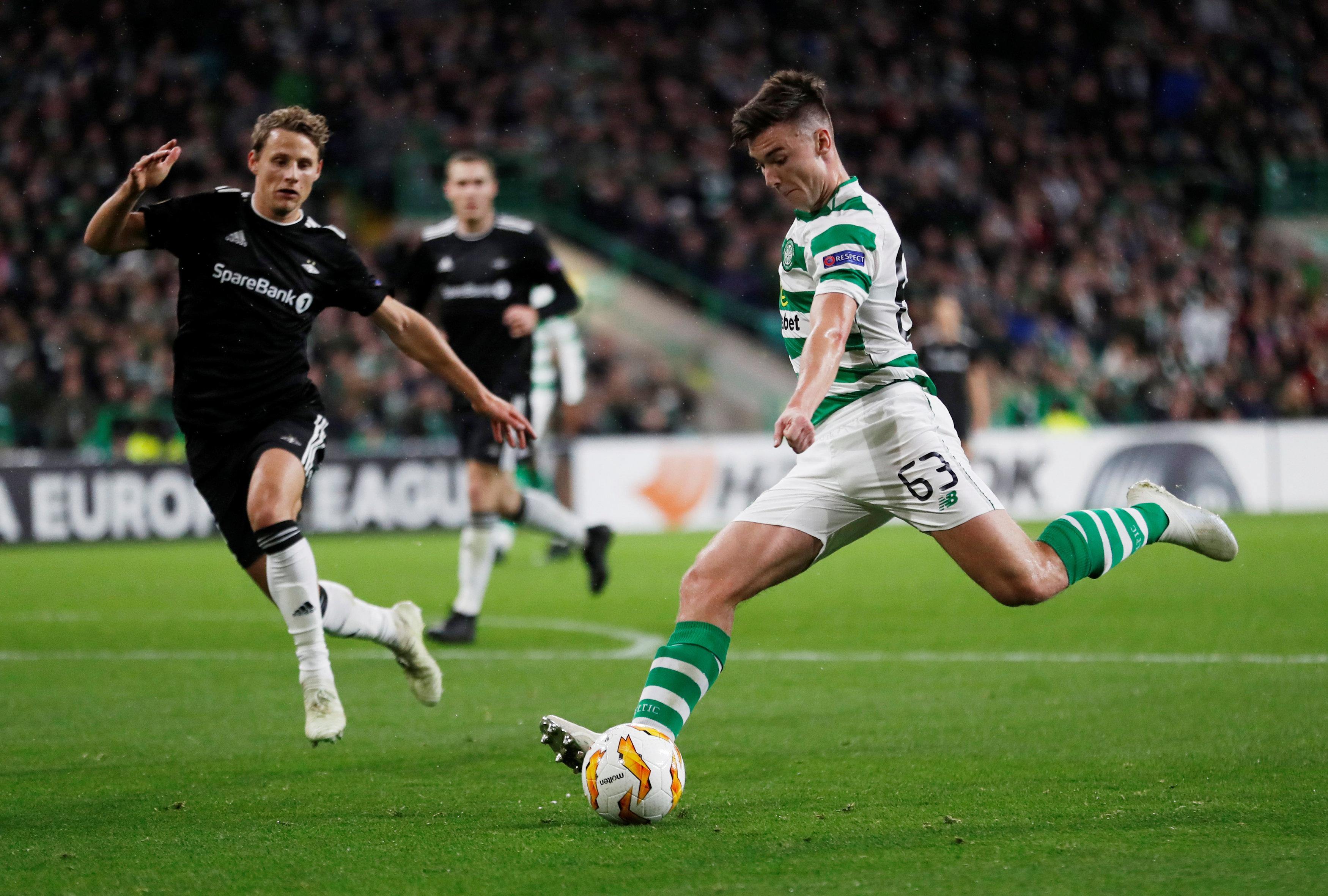 Nine minutes from half-time Kieran Tierney – the sharpest Hoops player – produced dazzling footwork to tie Vegar Hedenstad in knots before drilling a brilliant ball across the face of goal with, agonisingly, no takers.

Then seconds later the lively left-back unleashed a shot from 30-yards which Hansen gathered at the second attempt.

Rosenborg – unbeaten in 11 games since losing 3-1 here in July – were by and large comfortably containing Celtic.

But they needed heroics from Hansen several minutes from the break; first getting down well to his right to push away a placed Rogic shot from the edge of the box, then with an even better save getting back up to push against the post a point-blank Edouard follow up effort.

Celtic didn’t exactly come flying out of the traps for the second half.

Rogic did excellent work to intercept a slack pass from the back from Tore Reginiussen but then blew it with a shot straight at Hansen instead of picking out McGregor who had stormed down the left into great position. 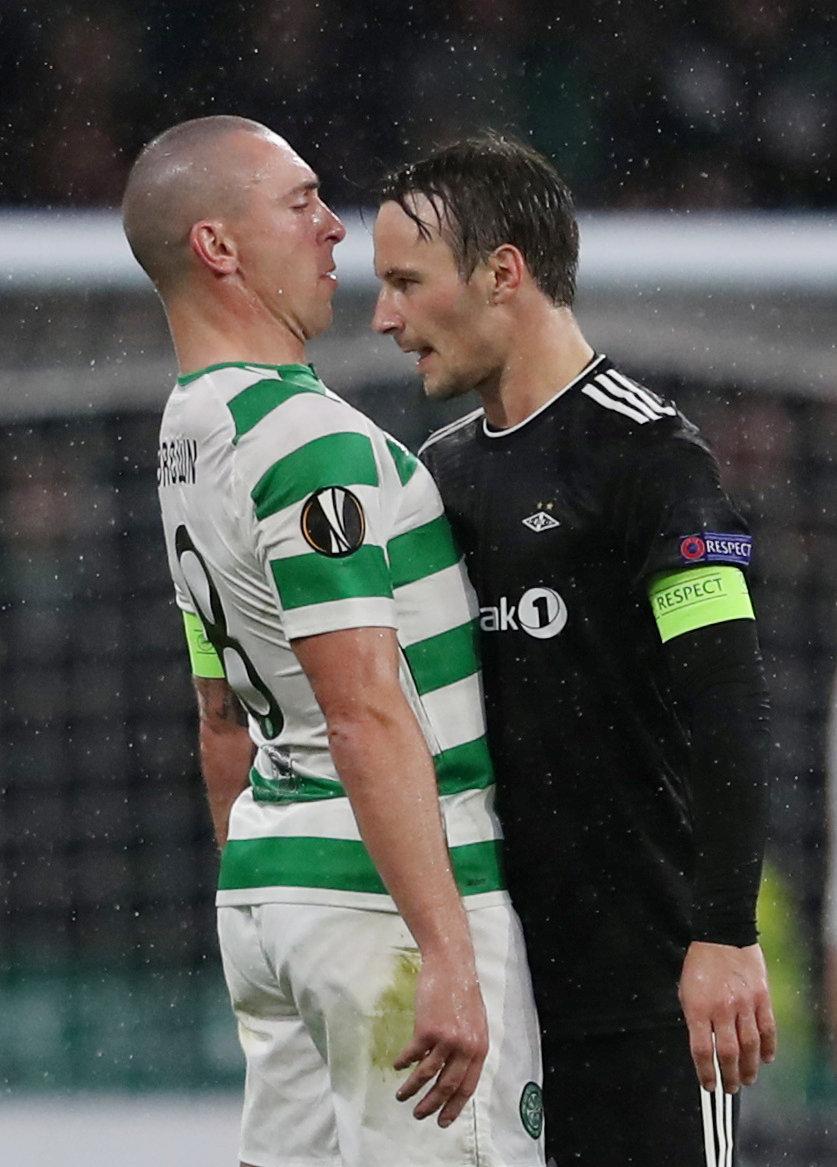 By the 55th minute Celts boss Rodgers had seen enough and Scott Sinclair and kid Mikey Johnston were given the shout to go on. Off came Rogic and the disappointing James Forrest.

Johnston soon made his mark.

A direct, piercing run at the visitors box was matched by a quality cross which fellow sub Sinclair volleyed wide of the far post.

Rosenborg, though, were far from having to resort to siege defending.

Celtic had plenty of the ball but toiled to create clear-cut openings – and by the 70th minute the supporters’ anxiety was being heard.

Rosenborg flirted with counter-attacks – but you never felt they would score.

Infuriatingly for the Hoops faithful, you also didn’t get a sense of their side scoring.

Griffiths HAD to be introduced for the ineffective Edouard and he was duly roared on by the fans with 14 minutes left.

The dangerous Johnston passed up a great opportunity in the 80th minute – hitting a first time left foot shot from another quality Tierney cut-back narrowly over from 12-yards.

Just as it looked like it was going to be a dismal, forgettable Euro stalemate you-know-who sensationally changed everything two minutes from the end.

This time he didn’t break any laws with his acceleration – stunningly darting in to meet a Dedryck Boyata header from a Scott Brown free-kick and nodding past Hansen.

It was classic Griffiths.

The perfect way to get a message across to Rodgers and McLeish.