Toledo needed a 6.98 when he caught his last wave with 12 seconds left. 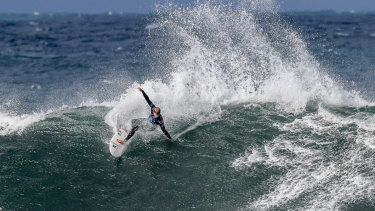 It also gives Florence the rankings lead after the 2016 and '17 world champion missed much of last season because of a knee injury.

He was the standout in the pumping two-metre plus conditions, billed as the 50-year storm, after he suffered a close call in Friday's big surf when washed close to the rocks.

But Florence was scratchy early in the final and at one stage needed a 9.33.

He pegged Toledo back and a 7.63 wave score with 10 minutes left gave him the lead, which the Brazilian could not take back.

Callinan then suffered a last-gasp loss to Toledo, with the Brazilian also coming hard late and his winning wave score announced after their heat finished.

It was Callinan's first semi-final appearance at Bells Beach and the wildcard entrant had to delay his flight to Japan for a qualifying tour event.

Earlier, Ferreira was furious after the judges called interference against him.

Smith had priority in their quarter-final heat when Ferreira crossed in front at the start of a wave.

While there was conjecture about whether it was justified, Slater said the rules were clear.

Ferreira was fuming as he returned to shore before the heat ended.

After several minutes and some thumping noises in the athlete ready room, he walked briskly up the hill and out of the contest venue, still wearing his wetsuit and with a towel over his head.

"I feel for him, you know – no one wants to win like that or lose like that," Smith said.

Slater, 47, was asked after the loss if this is his competition swansong at Bells Beach.

"I don't know – it was funny sitting out there, thinking it could be my last one. It was kind of sad."