The Wests Tigers were on the bus, Ivan Cleary's bus, so quickly on Sunday you wonder if they'd even noticed who was driving at all when boarding.

Less than half an hour after keeping their finals flame flickering with a backs-to-the-wall win over Canberra, they were off. Ricky Stuart might have barely finished his press conference before the Tigers had rolled into Goulburn. 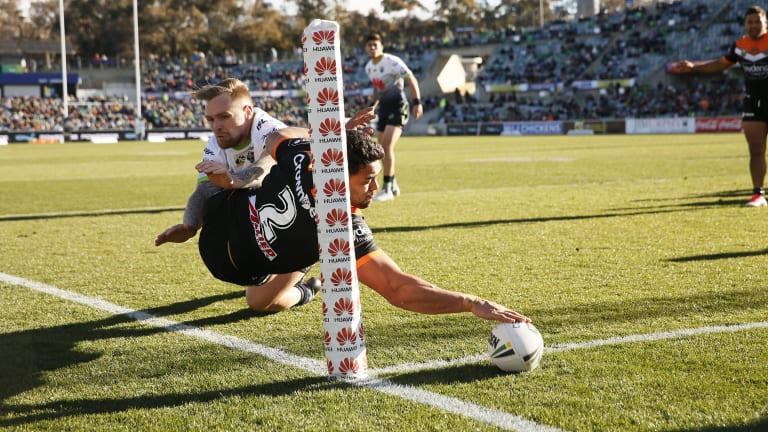 Try time: David Nofoaluma goes over for the Tigers.

Cleary wants everyone to know he's on board, at the very least until his contract expires at the end of 2020. But any other questions about the approach from the Panthers and the five days he took to put the speculation to bed? Well, they're going to have to wait for another day.

"I’m not going to talk about it," Cleary deadpanned after the Tigers leapt to within two points of the top eight with a 22-20 win over the Raiders at Canberra Stadium.

What's the misinformation you alleged has been peddled? 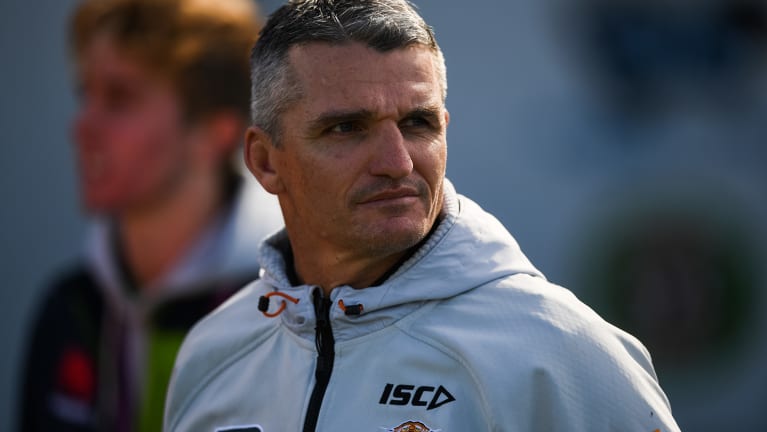 What Cleary was comfortable talking about is how his Tigers side remains in the finals frame. All week he's had to listen to rumours about a reunion with son Nathan next year, in 2021, somewhere down the line … but what about as soon as this year?

They might again be on opposite sides of the deepening western Sydney divide between the Tigers and Panthers, but who is to suggest the joint venture can't sneak into eighth spot and meet a fifth-placed Penrith with Cleary jnr calling the shots in the opening week of the finals?

It's just another question to add to a week full of them after the Tigers twice boasted 16-point leads in the first half before scraping home against a free-wheeling Raiders.

"All I can say is I never once saw them anything other than completely focused on their preparation," Cleary said of his side after a turbulent week. "They were really good throughout the week and I thought it showed the way they played.

"At the end of the day it was pretty obvious they were determined not to let that one go under enormous pressure. It shows what it means to them."

And maybe what their coach means to them, too.

According to halfback Luke Brooks, Cleary didn't even have to tell the squad he was honouring his contract at Concord. In his own words, "everyone sort of knew". Their supporters didn't know they would still have a finals dream until the dying seconds in the nation's capital.

Against Canberra the Tigers struck early and often. In the end it was enough.

They can thank Raiders enigma Joey Leilua for a lot of that, piling on three unanswered tries while the centre was in the sin bin during the first half.

During that 10-minute period Canberra had one possession, a dropped ball by Shannon Boyd. It was enough to send Stuart mad, and maybe Wayne Bennett furious.

His Brisbane side are just two points ahead of the Tigers and have the minor premiership hopefuls South Sydney in town on Thursday night.

"Fur us to hang in there and get back into the game I thought was a real big effort," Stuart said. "But it doesn't detract from the disappointment."

If it wasn't for Leilua's sin binning, the Tigers might have been turning their attention to Mad Monday after being outscored 20-6 when both sides had their full complement. But they won't care.