Home » Sport » Cleary not following Taylor’s path out of Canberra

The last time Wests Tigers played at Canberra Stadium it led to Jason Taylor's sacking, but Ivan Cleary vows he'll still be around after this trip down the Hume Highway.

Cleary pledged his future to the Tigers on Saturday, despite overtures from the Penrith Panthers to replace their sacked coach, Anthony Griffin.

It was a timely boost to the club ahead of their crucial clash against the Raiders at Canberra Stadium on Sunday. 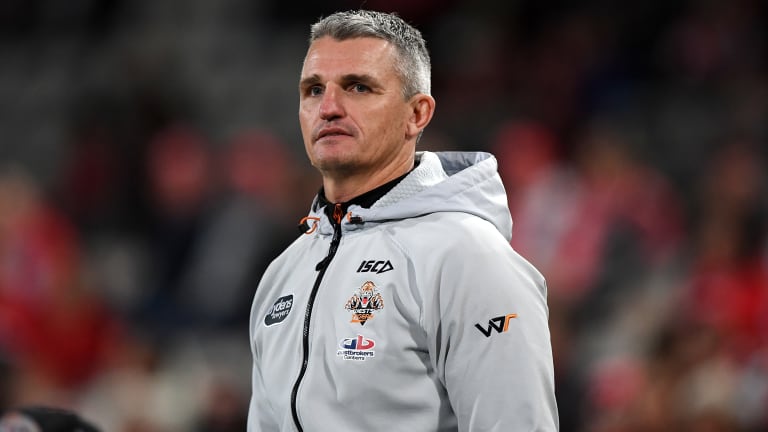 A win over the Green Machine will bring them within two points of the eighth-placed Brisbane Broncos.

Cleary has vowed to honour his contract, which has another two seasons to run, but there were concerns amongst Wests supporters he could be off to join his son Nathan at Penrith as early as next week.

Taylor was shown the door after the Raiders belted the Tigers 46-6 in round three of 2017.

It's part of the Green Machine's four straight wins over Wests by an average margin of 43 points.

“I was as surprised as anyone at the announcement of the dismissal of Anthony Griffin," Cleary said on Saturday.

“I have not received any offer from the Panthers, nor have I asked the Wests Tigers for a release … I’m honouring my contract.”

Having made a statement about his future, Cleary only wanted to talk about the game against the Raiders.

He felt they'd turned around their form in recent weeks, having won three of their last four games.

Cleary admitted the Broncos' loss to North Queensland on Thursday night had opened the door for them to sneak into the top eight.

"It does, but you can't really control what other teams are doing. Everyone's got to play each other at some point," he said.

"All we can control is our own destiny. We've won three of our last four so we go down to Canberra with a bit of confidence, understanding the challenge ahead and looking forward to that."

It would be the Tigers' first finals appearance since 2011, when they got knocked out in the semi-finals.

That was just the joint venture's third finals appearance since the merger ahead of the 2000 season.

Tigers captain Chris Lawrence was part of that finals campaign, but will miss the Raiders game due to hand and hamstring injuries.

"We've got four games left and it's do or die for us, we have to keep winning," he said.

"We've got a shot at making the semis, which we haven't done in quite a long time so for the playing group and the coaching staff that's the most important thing.

"All the outside distraction and noise can be sorted out by the administration and the club."

But they face a Raiders team that's dominated them in recent visits.

Canberra halfback Sam Williams said the fact they'd won their last four games against the Tigers by big margins wasn't a boost to help them bounce back from their loss to the Panthers, but rather the fact they were back at Canberra Stadium.

It will be just the Raiders' second home game in two months.

Williams said they needed to control the football better to help avoid a repeat of the fadeouts that have plagued their season, including against Penrith last weekend.

"I wish there was a single answer. I think a lot of it's just controlling the footy and then defending your errors," he said.

"It's probably one thing we need to be better at that. But there's a lot of reasons that go into it. I think we are learning, slowly."