Home » Sport » 'Click attack': Why there is no magic system for beating All Blacks

Everybody is always trying to figure out what tactical point of difference the All Blacks bring to the game.

Contrary to popular belief, the All Blacks aren't amazing when it comes to tactical innovations.

If you examine the All Blacks and study the way in which they play, they really don't try to outwit the opposition the whole time. The irony is that the more opposing teams try to come up with some weird tricks in an attempt to defeat the All Blacks, the more the men in black stay ahead. 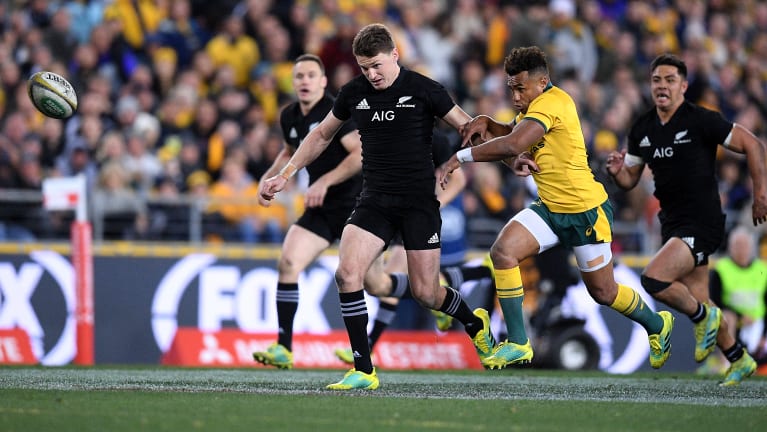 Another click: Beauden Barrett toes the ball ahead for a try after a Wallabies mistake. The All Blacks are masters at exploiting broken-play opportunities.

In terms of the best defensive system to employ against the All Blacks, teams have dabbled with so many different ideas and playing patterns.

Opposition have tried to rush them, go soft on them and keep numbers on their feet. However, I don't believe there is any singular best system to utilise against the All Blacks because their click attack is second to none.

The concept of click attack is where they wait for opportunities to counter from broken play and pounce to devastating effect. A poor kick-chase, an up-and-under, which they field, and a turnover are all clicks for them on offence.

Everybody tries to perfect click attack, but few teams actually manage to implement it successfully. Click attack is akin to a door closing, and the defence is theoretically at its most vulnerable for the next two phases. At a high level, the defence would realign and then it basically morphs into multi-phase rugby. The ability to try to break down the defence within the first couple of phases post the situation is critical, and the All Blacks are the best at that out of everybody in the game.

I don't believe there is any singular best system to utilise against the All Blacks because their click attack is second to none.

When facing the All Blacks, it's not just about the system you use. It's more complex than saying you are either going to defend softer or harder, have better line-speed or opt not contest the breakdown. It's about how consistently you can stay alive and be aware to the fact that there will be a threat from the world's top-ranked team. The threat will come off set-piece, kick-return, contestable kicks and turnovers.

We played well in Cape Town, capitalised on three try-scoring opportunities and fought our way back to get ahead in the match. And then we had one poor kick-chase – where two players fell asleep – and Damian McKenzie cut through our backline defence and scored a crucial five-pointer.

We should have beaten the All Blacks, but they scored two tries off our mistakes, which is typical of them. You can do really well for long periods of the game against New Zealand, but the reason they are the best team in the world is because if you make one mistake, they will punish you.

The Irish decided to keep the ball away from the All Blacks and you could argue that that approach worked best when they claimed a famous win in Chicago in 2016, which snapped the All Blacks' 18-match winning streak. One of the reasons it worked for Ireland is because they are really tight when they retain ball possession, don't put much width to their game and mostly play off number nine. 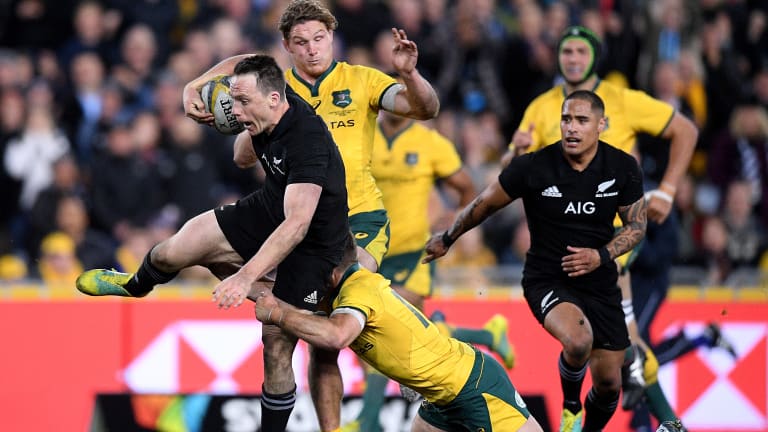 Free range: Ben Smith makes a half break in Bledisloe I in Sydney. The fullback made the break that set up New Zealand’s first try just before half-time, in a classic case of striking with maximum psychological impact.

However, as Australia underlined in the Bledisloe Cup opener in Sydney, if you hold onto the ball in the wrong areas of the field and turn it over against the All Blacks, you create your own nightmares. The visitors scored five second half tries, each off the back of turnovers and within less than a handful of rucks of regathering possession. The All Blacks are ruthless exponents of transitional play.

By all accounts, the All Blacks don't have a weakness in their game whereby opposing teams can attack them. Steve Hansen's men are a fit, motivated team and they perform the basics particularly well. It's not that the All Blacks do something different – they just do everything better than the rest.

South African Brendan Venter is a 1995 Rugby World Cup winner and a former assistant coach of the Springboks.