The Wallabies have confirmed a double back-row blow ahead of their tour to South Africa and Argentina, with Lukhan Tui and Pete Samu set to stay at home in what now serves as an opportunity for promising Melbourne Rebels forward Angus Cottrell to make his Test debut. 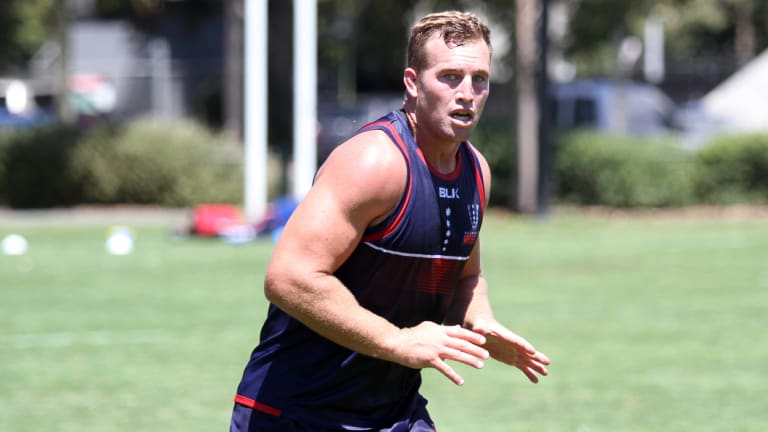 After a 23-19 loss to the Pumas that was marred by Tui’s ugly altercation with a spectator, the Wallabies’ worst fears have been confirmed with the 22-year-old set to take an extended break from the game, due to family reasons, which raises questions about his availability for the rest of the year.

Tui has featured at blindside breakaway in Australia’s last five matches and his absence is now an even bigger concern given Samu will miss the next four weeks with a knee injury he sustained in the first half of the Wallabies’ shambolic loss to the Pumas last weekend.

Cottrell, 28, finds himself in the right place at the right time but he certainly deserves selection in the wider squad. He was named in an Australian Supwer Rugby players’ team of the year that was announced last month.

After 57 appearances for the Western Force from 2012 to 2016, Cottrell chalked up 14 matches for the Rebels this season and averaged 66 minutes per game.

Providing Michael Hooper overcomes the hamstring injury that kept him out of the Argentina fixture on the Gold Coast, three players – Cottrell, Ned Hanigan and Caleb Timu – will have to squeeze their way into a vacant back row position alongside certain starter David Pocock.

There is every chance Cottrell could come off the bench for the Wallabies against the Springboks in Port Elizabeth; a venue Australia has not played at since 1963.

The Wallabies have not won in Port Elizabeth from four attempts and have lost by an average margin of 13 points.

After taking on the Springboks, who will be full of confidence after knocking off the All Blacks 36-34 in Wellington, the Wallabies will get on another long flight to Argentina to face the Pumas.

In the hooker department, Cheika has opted to leave Tolu Latu at home and shown faith in Brandon Paenga-Amosa, who has not featured since the Ireland series in June. Latu will get minutes under his belt in the NRC for the NSW Country Eagles.

Tatafu Polota-Nau and Folau Faingaa are expected to be the two rakes in next week's match day 23, with the former set to join the squad on Sunday local time in Port Elizabeth after making his way back to the northern hemisphere for club commitments with Leicester.

Gordon’s inclusion is the only change of note in the backs. That is not to say he is ahead of Powell yet in Cheika’s pecking order but there is an appetite to give the Brumbies halfback some game time in the NRC in a bid to keep him sharp.

Sefa Naivalu has also been added as one of 13 backs in the touring group.

The Wallabies have won two of their last nine Tests and face the very real possibility of coming away from their two-week tour without a win if they don't improve on what they dished up at Cbus Stadium.

Australia have come away victorious just three times in their last 19 matches on South African soil dating back to 2001. The challenge is not being lost on Cheika ahead of his side’s departure from Sydney Airport on Saturday morning.

“There’s an opportunity presented to us now to get some good victories overseas and that’s going to come from consistency in the way that we play,” Cheika said. “We have got some news additions to the squad and these guys have shown plenty of grit and determination to get an opportunity at a higher level so now we’re looking for them to add that to the mix.

“We’re very determined to make sure that we repay the faith and show people what we’re about in the way we play.”

Wallabies squad for tour of South Africa and Argentina