Ryan Crotty is in contention to return to the All Blacks midfield just three weeks after his playing future was the hottest topic in New Zealand.

All Blacks coach Steve Hansen on Sunday described Crotty and flanker Sam Cane as "symptom-free" after recent head knocks, and would be monitored ahead of the Test against Argentina in Nelson on Saturday. 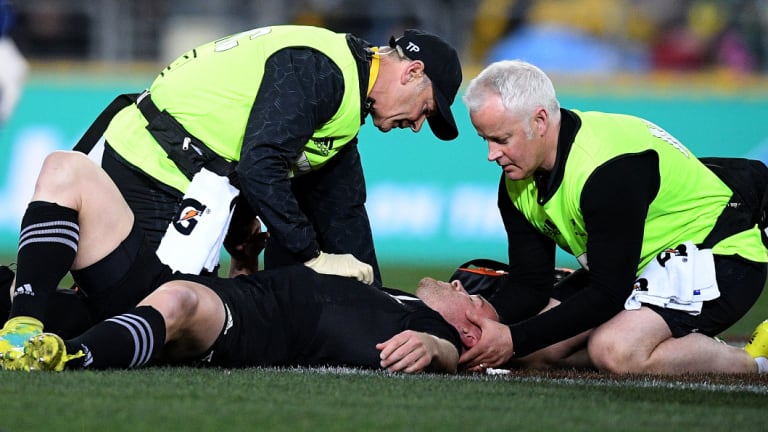 But Sonny Bill Williams is definitely out, with Hansen saying the inside-centre would return to contact training this week and potentially be considered to face South Africa in Wellington on September 15.

Crotty was knocked unconscious early in the Bledisloe opener in Sydney on August 18 when he was involved in a sickening head clash with midfield partner Jack Goodhue.

Whether Crotty, who has a long history of head knocks, should call time on his career became the most polarising sporting topic in the country following a social media post from his sister Shea Crotty, a former Tall Ferns basketballer, that read: "I want to see my brother grow old and able, not battling the brain forever."

Couldn’t agree more my girl. Know how frustrated he will be but for selfish reasons I want to see my brother grow old and able, not battling the brain forever. https://t.co/2fYfGcClau

Hansen admitted to being "concerned" for his midfield rock the day after the heavy concussion.

But when the All Blacks roadshow arrived in Nelson on Sunday ahead of Saturday's Rugby Championship Test, Hansen confirmed Crotty was in consideration to pull on the No.12 jumper that was worn by Ngani Laumape in the second Bledisloe Test.

Cane is also expected to be available for the test against the Pumas after he suffered a head knock at Eden Park.

"Ryan and Sammy are both tracking along nicely. We'll make decisions about them during the week," Hansen said.

Hansen was keeping his cards close to his chest when asked about the make-up of his side to take on the Pumas but he did confirm Williams will not play.

Williams, who is still recovering from a shoulder injury, is in Nelson with the squad but the best case scenario for a return would be the Springboks.

"We've just got to get him back into contact and make sure that his shoulder is OK so we'll give him a bit of time to do that," Hansen said.

The Pumas, who lost their opening match of the Rugby Championship to South Africa 21-34 before reversing the result the following week 32-19, will relish their underdog tag against the All Blacks.