"And I wouldn't have expected one either,'' Keary tells Fairfax Media.

So after getting one up on the Souths owner, what about their former coach? 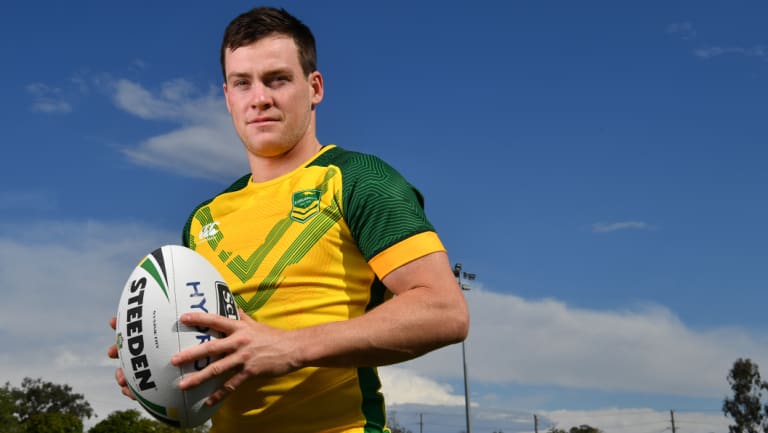 Hopping to it: Luke Keary is determined to make the most of a late call-up to the Kangaroos.Credit:NRL Photos

Michael Maguire is in charge of the New Zealand team to face Australia on Saturday in what will be Keary's debut Test in the green and gold.

"It's no secret things weren't hunky-dory before I left Souths, but I still have a lot of respect for Madge and the people at the club and what we were able to do as a team in 2014,'' Keary said.

"There's definitely no animosity from my end. I'm pretty sure there's none from their end.

"I don't know what transpired in the end at Souths. And whoever made the decision [not to re-sign Keary], it doesn't matter because it was made for the good of the club and it ended up good for me, even though you don't understand it at the time as a young player.''

Keary has come a long way since he departed Souths and Crowe at the end of 2016 to join bitter rivals the Roosters, where he won the premiership 12 days ago. Not only did he have a huge role all season, he took out the Clive Churchill Medal.

Despite six solid days of celebrations and endless replays being shown at any given pub in the east, Keary is yet to watch the 21-6 title triumph over the Storm in full.

The 26-year-old says he still has two important matches coming up, and only after that he might allow himself to reflect on his best season to date.

While Keary was interviewed in his Auckland hotel foyer, a Kiwi local walked over and said: "Mr Clive Churchill Medallist. You had stellar year. What about this guy in the grand final? And now you get an Aussie call-up. Congratulations. You're a legend.''

Keary agreed that it had been "crazy".

"I wanted to enjoy the moment. I have, now this is the biggest opportunity I've got in my career and I've got two weeks to make the most of it."

Keary was a late addition after Cameron Munster pulled out for personal reasons.

"It's not the best circumstances to come in at the expense of someone else," he said. "But you have to take the opportunities whenever they come.

"Inside my head I have to give everything I've got the next two weeks, and then I'll have a break and reflect on the year. It's a funny game, rugby league, and as soon as you start reflecting you can get knocked back down to where you should be.''

He has found the early sessions with new halves partner Daly Cherry-Evans effortless and says the bloke he has watched closely the past eight years has the type of game that will gave him the freedom to play the natural No.6 role on the left with clubmates Boyd Cordner and Latrell Mitchell and Cronulla's Valentine Holmes.

Keary was included in the NSW extended squad this season and the debate over him versus James Maloney for the NSW No.6 jersey will no doubt feature prominently in the selection debates come the new year.

"I don't like to set goals and say 'I'll make this team or win this award','' Keary said.

"You want to play for your state and country. It's a long time between now and Origin I.

"The only thing I can do is put myself in the best position.

"The success NSW had last year, I don't expect to walk into that team. I expect the guys who got the job done will be given the best chance to do it again, which has served Queensland well in the past. But I'll stick my hand up.''