Home » Sport » Davies: only the losers will complain about Canberra Classic fairways

Former world No.1 golfer Laura Davies is confident she can win on a rejigged course at the $150,000 Canberra Classic next week.

Royal Canberra avoided a pre-tournament disaster amid concerns the event would be cancelled due to the state of some of the fairways after the club poisoned the couch grass to remove it. 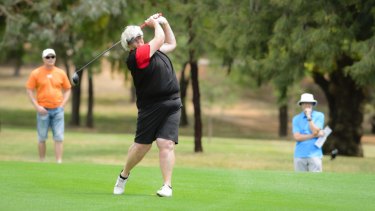 Former world No.1 Laura Davies is confident ahead of the Canberra Classic next week.Credit:Sitthixay Ditthavong

There was more couch than expected and combined with Canberra's hot summer conditions, the fairways were left looking patchy.

Royal Canberra has 27 holes and they've avoided the worst of the damage by designing a composite course for the women to play.

Davies said the course was perfectly playable and tipped the only complaints to come from those playing poorly.

"It’s the same for everybody, it's unfortunate what's happened up there but we’re playing the other nine that's in really good shape and they’re cherry-picking the best nine from the other.

"Hopefully within a year, the fairways are back to the way they are but I don't really think it's an issue because apparently, the greens are magnificent, that's what you always expect from Royal Canberra.

"I’m hitting it OK but it was a disappointing couple of weeks down there in Adelaide and the first week at Vic Open where I missed the cut by two," Davies said.

"Tee to green I'm hitting it well, I've just not holed many putts. That’s what you've got to do if you want to compete, you've got to hole the putts.

"There will be good players here because it's a full European Tour event. Sarah Kemp just had a really good finish at the Vic Open and did well last week.

"There are so many good players coming, Hannah Green will be a big threat. It'll be a good field and well worth watching."