Seeking to return to the finals for the first time since 2006, the Demons are yet to beat another side currently in the top nine, with their latest loss coming to Sydney at the MCG on Sunday.

The Dees have top four sides West Coast (Optus Stadium) and Greater Western Sydney (MCG) in the seasons’ final two rounds, and while they could still lose both of those games and make the finals, they would need other results to go their way. A win against the Eagles or Giants should ensure Melbourne make the final eight, with the Dees’ healthy percentage working in their favour. 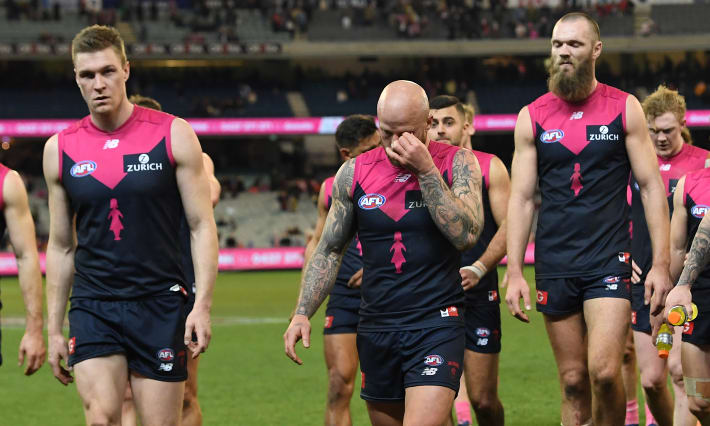 The dejected Dees walk off the MCG on Sunday.

Forward Jesse Hogan (foot) and defender Jayden Hunt (ankle) were both sent for scans on Monday, while ruckman Max Gawn will be monitored as he deals with a corked calf that affected his preparation for the Swans game.

Harmes remained upbeat after the loss.

“[We’re] pretty disappointed. But there’s a lot of positives to come out of it. We had more scoring shots, more inside 50s and we won contested ball,” he said.

“Goody [coach Simon Goodwin] just said we’ll learn from it, move on and try and get over to West Coast and get the win.

“Our finish for goal and our kicks inside 50 let us down. We’ll do a bit of work on that at training, and hopefully we’ll improve on that for next week.”

Melbourne missed the finals by 0.5 per cent last year, overtaken by the Eagles in the final home and away game of the season. Melbourne could have booked their finals spot had they beaten Collingwood in the MCG in the last round of 2017, and Harmes said the Dees were keen to atone for that failure. 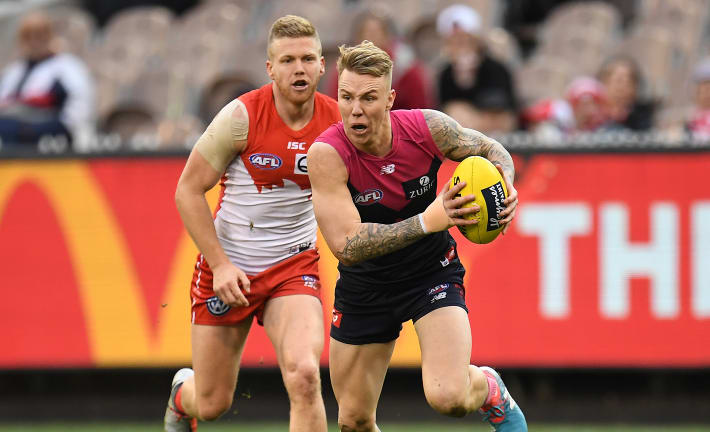 James Harmes in action on Sunday.

“We’ve had a few challenges this year. Every time we’ve faced a challenge we usually overcome it. We’re really excited to get over to West Coast next week. We’ll see how we go but if we play our brand of footy, it stacks up against most, so we’re pretty excited,” he said.

“It’s nice to know [our destiny’s still in our hands], especially after last year. We’ve got two games to, and our destiny is in our hands. If we play our brand, I think we should be right.

“I guess external noise adds a bit of pressure. But we believe when we play our footy, we’re pretty hard to beat. So [the mood is] not really too bad, around the group.

“We’ll stay positive. We’ll get over to West Coast and give it a good crack.”

The Demons were smashed by 38 in uncontested marks against Sydney, continuing a theme from the Dees’ recent defeats. Harmes said the Dees would review the issue this week.

Tagger Harmes had 26 disposals to be among Melbourne's best in Sunday's game.