Home » Sport » Demons will be forced to reshuffle defence

Melbourne will be forced to reshuffle its defence once again heading into the crucial home stretch to finals after losing another backman, Joel Smith, to injury on Sunday.

Smith was forced from the field in the final quarter of the Demons’ 96-point win over Gold Coast at the MCG with some help from the green painkilling whistle after breaking his collarbone. 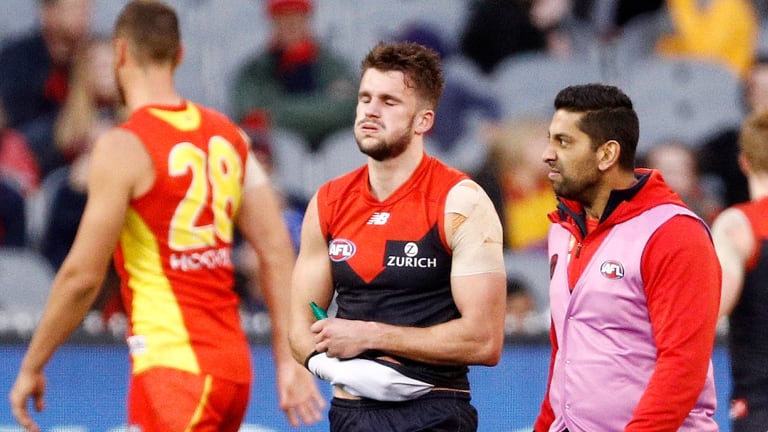 Cruel blow: Demon Joel Smith leaves the ground after being injured in a tackle against the Suns.

With Sydney, West Coast (away) and GWS awaiting them in their final three games, coach Simon Goodwin admits refurbishing his back six is something the selection committee will have to look at.

“Our coaches have done a really good job at adapting to some personnel (issues) and so we’ll continue to do that,” Goodwin said post-match.

“We’ve got some guys that are obviously coming back from injury. Jayden Hunt played his first game (back in the VFL today), we had Baily Fritsch down there at the end of the game today, Cam Pedersen we’ve repositioned him in the VFL as a key position defender and he has played some outstanding footy. So we’ve got some options.”

Smith is expected to miss three to five weeks after undergoing surgery on Sunday night while Hibberd remains at least a week away from being available.

Meanwhile, Goodwin confirmed that co-captain Jack Viney (toe) won’t be available until the finals if the Demons qualify, while forward Jake Melksham (hamstring) remains a 50-50 proposition to face Sydney.

One player who returned from injury for the Dees on Sunday was Aaron vandenBerg who had been sidelined for nearly two years with a foot/heel issue and Goodwin was rapt for the midfielder.

“He’s been through a lot of hard work and his resilience certainly around his footy but also around his personal life, he’s had a lot going on and he’s a really important part of our footy club and our footy team so it’s great to get him back out there,” Goodwin said. 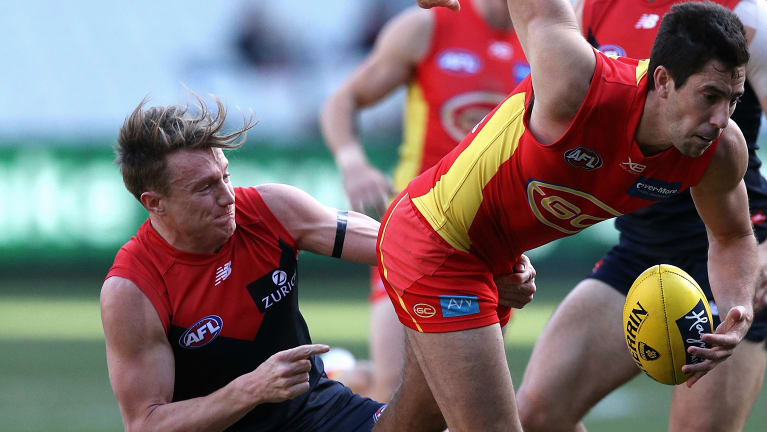 Melbourne’s season was precariously placed after they lost three games in a row to sit in seventh position on the ladder heading into round 16.

Since then, they’ve won four of five games, with the one less in that stretch an after-the-siren heartbreaker against Geelong, and Goodwin has been pleased with his side’s response.

“We’ve been building some really solid form in the last month,” he said.

“A lot of our key performance indicators, even when we lost, were still tracking in the right direction. So we knew that if we kept doing things that we’ve trained to do, our form would turn around and I feel like we’re building a really good block of form at the moment.”

The heavy defeat capped off a tough week for the Suns who received confirmation from their star co-captain Tom Lynch that he wants to leave the club at the end of the season.

Speculation also surrounds other senior Gold Coast players such as Steven May, David Swallow, Jack Martin and Aaron Hall, but coach Stuart Dew was confident those four players would remain with the Suns beyond 2018.

The Suns are languishing in 17th spot on the ladder with just four wins this year, but Dew denied the time had come for the club to “start again”.

“I think we certainly have areas to improve. Absolutely the ladder tells us that,” Dew said.

“So we’re absolutely digging deep on what that is on field and off field and going about our work. But the notion of starting again? I think there’s a fair bit at the club we can build on currently.”

In a further blow to the Suns, forward Peter Wright is unlikely to play again this year after injuring his knee in the opening minutes of Sunday’s match.