Home » Sport » Djokovic steams his way to US Open win

Former men's singles champions Novak Djokovic and Marin Cilic opened their campaigns for a repeat victory at the US Open with contrasting first-round wins in sweltering heat and humid conditions.

Djokovic looked in real trouble in the steamy conditions against Marton Fucsovics and admitted to feeling sick during the almost three-hour encounter but recovered to win 6-3, 3-6, 6-4, 6-0 on Arthur Ashe Stadium. 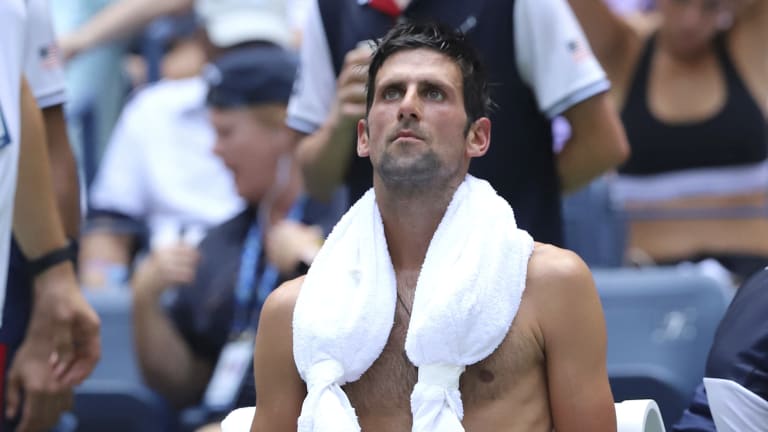 Novak Djokovic tries to deal with the heat at the US Open.

The reigning Wimbledon champion, who has struggled in similar situations in the past, called for the doctor during the second set and trailed by a break in the third before Hungarian Fucsovics, too, began to wilt.

The heat was so brutal on the second day at Flushing Meadows that tournament officials added a 10-minute break between the third and fourth set of the men's best-of-five singles matches.

And both players took advantage of the break before Djokovic made swift work of his opponent on the resumption to set up a second-round clash against American Tennys Sandgren, who eased past Viktor Troicki in straight sets.

Cilic clinched a second-round berth after opponent Marius Copil of Romania retired in the third set trailing the seventh-ranked Croatian 7-5, 6-1, 1-1.

Cilic, who was champion in 2014, was cruising against Copil, who quit with a left-arm strain, according to a USTA official.

Cilic, who said it was "one of the most brutal days that we had so far this year," told reporters the heat, plus the pressure of the shot clock introduced at the tournament this year, had proved challenging.

"I was just missing some easy balls, making some unforced errors that are not that usual for me," he said, referring to his performance early in the match.

German fourth seed Alexander Zverev hit 37 winners on his way to dispatching Peter Polansky 6-2, 6-1, 6-2 in an hour and 35 minutes.

In the women's draw, Jelena Ostapenko sweated out a 6-4, 4-6, 7-5 win over German Andrea Petkovic to reach the second round.

With the thermometer pushing towards 38 degrees Celsius, the pair battled for two hours and 18 minutes under a ferocious sun before the 10th-seeded Latvian ended the marathon on her fourth match point, sending the few remaining spectators at the Louis Armstrong Stadium court scrambling to find shade.

"A very tough match. She was fighting for every point until the end," said Ostapenko, who will meet American Taylor Townsend in the second round.

"It was very humid and also very hot, but it was the same for both of us. I mean, we had to deal with it."

And fourth seed Angelique Kerber showed she has fully recovered from last year's US Open hangover by disposing of Russian Margarita Gasparyan 7-6 (7-5), 6-3 to reach the second round.

British No.1 Johanna Konta, not seeded at a grand slam for the first time since the 2016 Australian Open, suffered a 6-2, 6-2 defeat to French sixth seed Caroline Garcia.