Home » Sport » Dockers in crisis: Big four regenerate while Fremantle's rebuild is blowing in the wind

When Fremantle began its 2016 season there were high hopes among long-suffering Dockers fans it could conceivably end on the last Saturday in September with newly-crowned Brownlow Medallist Nat Fyfe and coach Ross Lyon holding aloft the club's first AFL premiership at the MCG.

Barely 24 months earlier Lyon had taken the club to its first grand final, with wasted chances in front of goal (8.14) the major reason for its 15-point loss to Hawthorn, who went on to win three straight from 2013-2015. 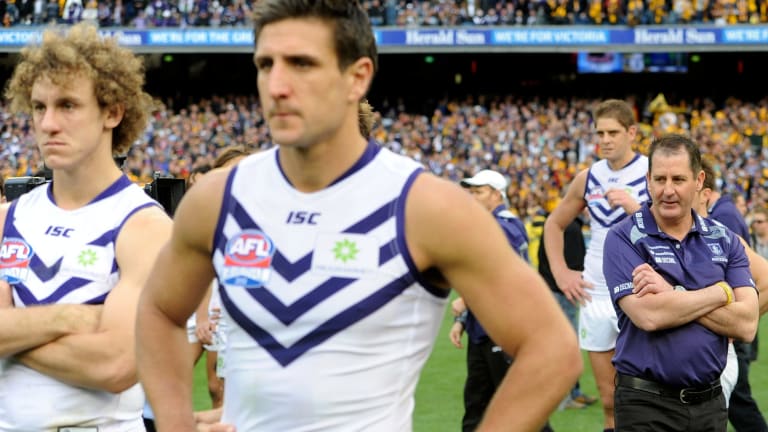 Fremantle lost the 2013 grand final but it seemed like the start of a successful era under Ross Lyon.

After exiting the finals in straight sets in 2014, the Dockers finished the regular 2015 season atop the AFL ladder but again missed opportunities and made errors under pressure when the match was on the line to fall to eventual premiers Hawthorn by 27 points in a preliminary final at Subiaco Oval after closing to within nine points and a first-ever AFL grand final between the two WA clubs.

When Lyon signed a contract extension until 2020 in March 2016 it felt like the Fremantle Doctor was blowing gusts of goodwill through that premiership window, with Freo fans agog at the new prospect of a period of 'sustained success', one of the coach's favourite quips back then.

But fast forward 10 games into that season and the Dockers had been rendered woeful … they were winless and it was blatantly clear their window had somehow abruptly slammed shut; what was unclear was why it closed so ruthlessly. The answer may be blowing in the wind for some time.

Perhaps Lyon inadvertently put the writing on the wall for the entire 2016 season and ensuing two seasons when he said after a four-point loss to a "developing" Carlton that "our ability to transition the ball in a productive way out of centre back is our annus horribilis".

Three years later and Lyon is still up to his arse trying to get his players to transition from defence to attack in a manner befitting a finals team. 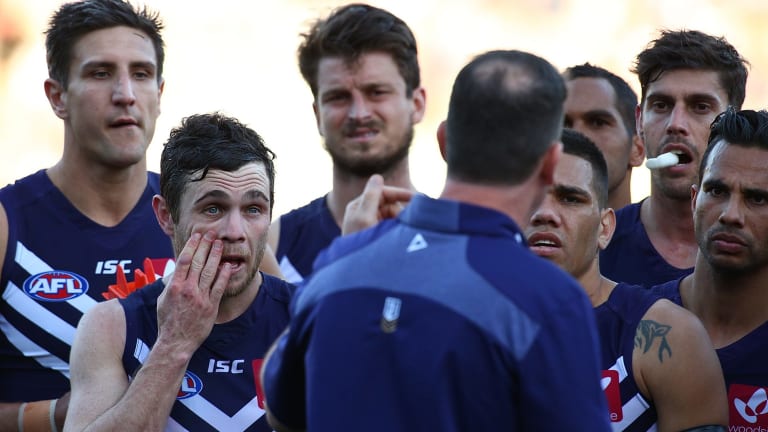 But one answer Fremantle should not forget is the one Lyon gave after it offered him a further five years on his existing contract on the eve of that promising 2016 season: "We’re certainly aiming for a premiership and we don’t shy away from that. Particularly at the end of this tenure [2020], I’ll have no excuse to not have achieved that, because we’re fully resourced."

Fast forward 63 games and Lyon has just led Fremantle to the worst defeat in the club's largely unsuccessful 24-year history – as well as his worst loss as a senior coach – a 133-point drubbing to Geelong in which they kicked 23 goals in a row while the Dockers managed only 0.5 in the last three quarters of the contest (if you could call it even that).

The round 5 home loss to the perenially-hapless Blues in 2016 prompted the now infamous change in heart from Lyon on his side's premiership fortunes in the immediate future.

"We don't rebuild but we re-stump, we re-wire, we re-plumb. Clearly we just don't roll along."

That post-match press conference produced some other telling lines from a seemingly disenchanted, newly-signed coach.

"I think we're all a bit shocked."

"We thought we were better than this."

"We need to progress and improve. Because it can get worse if you want to let it."

Somewhere along the way from that eye-opening round 5 battle with the Blues to now, and the rewiring (a quick fix) became replumbing (a little bit of digging) that required a full-blown rebuild of the fledgling port club.

It prompted WAtoday to construct its own analysis of Fremantle against other relevant teams on the ladder in the season preceding Lyon conceding the Dockers were, errrr, renovating.

Hawthorn, Geelong, Sydney and arch-rivals West Coast are four current examples of clubs who have been at the higher echelons of the AFL ladder as Fremantle under Lyon but have not felt the need to publicly declare they are rebuilding when they have fallen.

Rather the big four (in terms of consistency in ladder positions and debutants since 2014) have regenerated their lists and chances of playing AFL finals through better recruiting (mature age and from national drafts), game-day strategy and management of players to keep their premiership window wide open, season upon season. 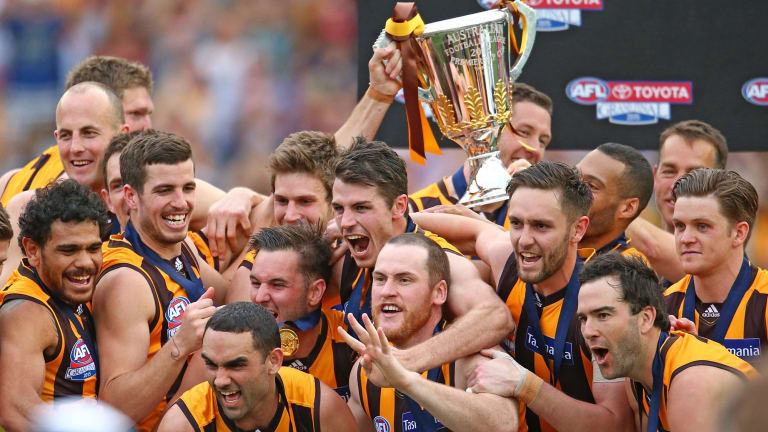 A happy team at Hawthorn after completing the rare three-peat against West Coast in 2015.

Finally to 2018 and with one round of the regular season left, Fremantle (8-13) sits idle in 16th, West Coast (15-6) are second and primed for a second grand final in four years, Hawthorn (14-7) are fourth, Geelong (12-9) are eighth and Sydney (14-7) fifth, with all four a realistic chance of making the big dance in September, where reigning premiers Richmond are heavily favoured to be waiting.

We don't rebuild but we re-stump, we re-wire, we re-plumb. Clearly we just don't roll along.

Lyon has constantly pointed to the rebuild, to youth and to the number of Docker debutants this season as evidence his rebuild is on track and an excuse for the number and nature of the club's losses, which have averaged 61 points since the round six derby at Optus Stadium.

Fremantle's growing pains can be seen in the respective ages of its list at the start of this season; while they have a bunch of promising youngsters, some of whom like Adam Cerra will likely be gone after their initial compulsory two-year contract expires, they also have the highest number of players aged above 30. 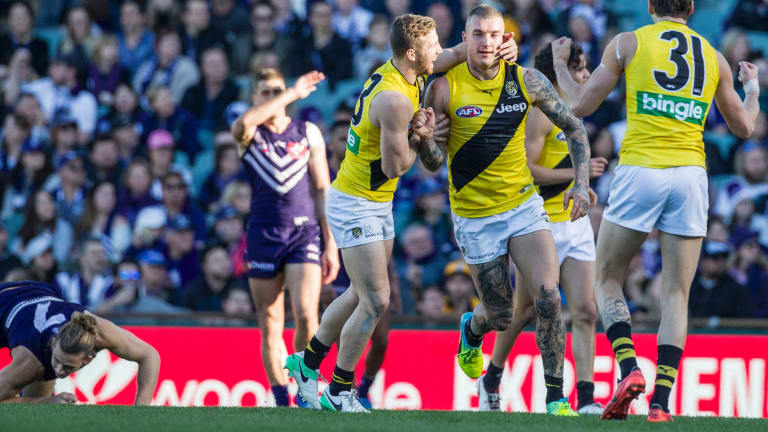 Richmond and Dustin Martin celebrate during the round 22 thrashing of Fremantle at Subiaco Oval.

Many conclusions can be drawn from myriad data but one that is set in cement is that the nature of Fremantle's performances have been as inconsistent as the big four's have been consistent.

Last season's twin losses above 100 points to Sydney and Richmond in rounds 21 and 22 and last week's historic 133-point licking from the Cats is clear and present evidence of that.

Inconsistencies week to week from Lyon's men are usually aligned to whether the team is playing at home or away, again in stark contrast to the big four, especially this season.

Witness West Coast in 2018 and you'll see a side that wins away from home, sometimes loses there, but whose performance is underlined by "consistency of effort" – another of Lyon's preferred post-match quips – for most of the gruelling 23-round season, starting from a position a few years back not disimilar to where Fremantle was.

Mediocrity is just not accepted at these clubs. At the Dockers it is almost expected every second week, with the excuse now being the rebuild. Mental strength may be worth another consideration.

Another home truth for Fremantle is that in the three years since Lyon was secured for another five years, the club has gone from genuine premiership contender to all-out pretender and one that has failed to make the top eight since the coach put pen to paper.

The other four clubs have collectively made finals 11 out of a possible 12 times.

Somewhere along the line from that pivotal loss to Carlton in 2016 to now, Lyon's attempts at a quick fix were shattered to pieces, forcing Ross to try his hand at a rebuild.

In between the club has managed to attain a record club membership and move away from their traditional Fremantle base to plush facilities in Cockburn.

Lyon has two more seasons to yield a premiership or, in his words, he would've failed Fremantle.

Fremantle better get on the phone to that doctor and hope the winds blow their window back open.