Japan is the key destination for Australia's swimmers over coming years but their new exercise facility is more reminiscent of Sweden as the Dolphins put the edge on their preparations for a key Pan Pacs meet next week.

The Dolphins have settled in to what is essentially a flat-pack gym in their staging city of Nagaoka before moving to Tokyo to take on Canada, Japan and the might of the Americans from August 9-12. 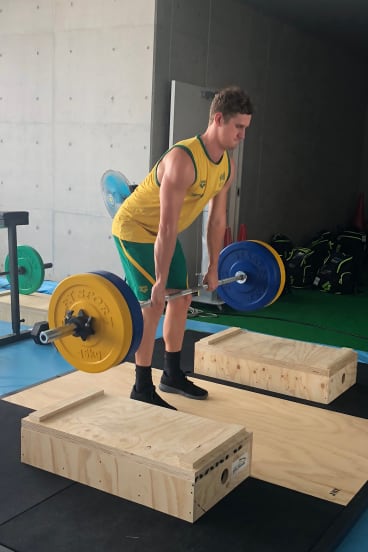 Lifting their intensity: Alex Graham at the Dolphins gym training ahead of the Pan Pacs.

When they depart, the gym will remain in place to be used by aspiring Japanese athletes and be re-visited by the Dolphins in their preparations for the Tokyo Games in 2020.

The gym has a key role in the strength and conditioning preparation of the team but it's also another part of a plan by team officials to give the squad as much familiarity as they can on the road to the next Olympics.

Cairns has already been selected as the permanent training base in Australia before next year's World Championships in Korea as well as the 2020 Games. The Nagaoka gym and pool are also part of that strategy.

Dolphins staff travelled ahead of the squad to Japan to set up the facility, which was ready to use as the 32-strong squad arrived in the midst of a heatwave. Emily Seebohm will join the team in coming days after completing her training in Brisbane in the wake of a relationship break-up with backstroker Mitch Larkin.

The gym equipment has been specifically selected for swimming programs, which have evolved rapidly to include a far more dry-land training as well as an obvious focus on performance in the water. 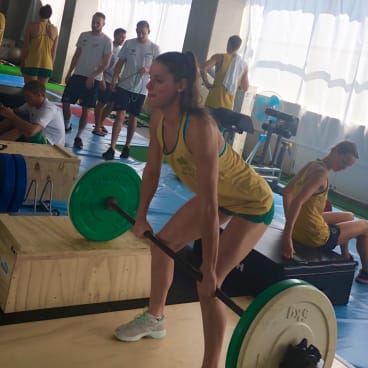 Comeback swimmers like butterfly star Madeline Groves have made gym sessions a huge component of their preparations, a move that paid dividends in an impressive return at the Commonwealth Games.

Breaststroker Jake Packard said the support staff, with Greg Shaw, Mark Osborne and Gary Vanderburgt at the vanguard, had given them every opportunity to perform against some of the best in the world next week.

"[Well done] to our guys that came over the day before [we arrived] and set the gym up and Deb [Savage] our strength and conditioning coach who has tweaked it a bit to fit a few more guys in the space," Packard said. "There are some serious weights being lifted and we are counting down the days and everyone’s doing really well.

"Breaststroke is such a power stroke; we do gym three times a week and a lot of that consists of power [work]. We always do high reps and high weights. And then we will slowly taper off and that’s the best part as we freshen up."

Rising freestyler Alexander Graham, who is part of a talented 4x200m relay that could trouble the dominant Americans, said the new space was another chance for the team to bond ahead of the Pan Pacs meet.

"The gym is really important. It helps you get that strength and power in the water, especially for a big guy like me, there’s a lot to move through the water. Everything I do here in the gym is extremely important," Graham said. "This program has made a massive difference. In the past I think I may have been doing stuff that wasn’t that specific to what I was doing in the water.

"Ever since I moved to Bond [University] and started working my gym coach there, she has really helped me and tailored it a little bit more to what I do which has been very important to help me swim fast."

The Americans are sending a huge squad to the meet, which will be an ideal acid test for the Dolphins as they plot their route towards the Tokyo Games, which will be held in the same competition pool.