Home » Sport » Don and not dusted: What's behind the Essendon revival

With his club’s season seemingly sunk, Xavier Campbell tried to present a picture of stability and unity. Things are never as bad as they seem, was the message he tried to convey in the Essendon rooms after the Bombers’ loss to Carlton in round eight. It was a positive spin from the Dons chief executive, especially given the club had just been beaten by their previously winless arch rivals, meaning Essendon had slumped to 2-6, having made the finals the previous season and having added a trio of ready-made players in the October trade period. 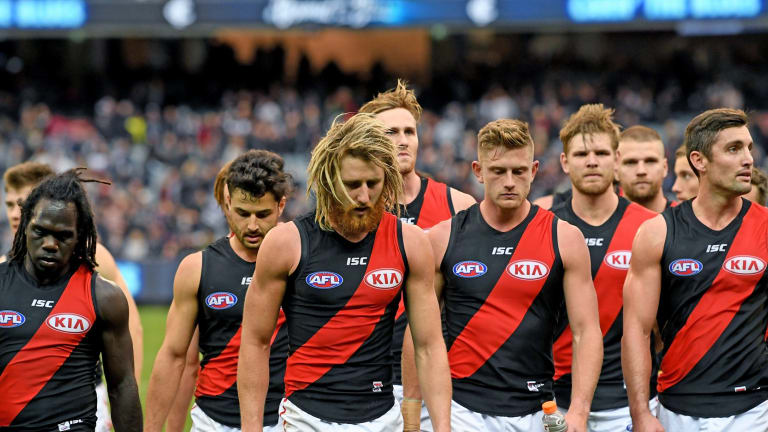 Dejected: Essendon players trudge off the ground after their round 8 loss to Carlton.

Campbell’s assertion that things could turn proved correct. After the Blues game, Essendon were a bottom-four side, above only St Kilda, Carlton and the Brisbane Lions. In the form ladder from round 9-19, the Bombers are a top-four side. Top-two in fact, with only Collingwood bettering them across that period. Essendon have beaten Greater Western Sydney and West Coast at their home grounds, as well as notching wins over top-eight challengers North Melbourne, Sydney and Geelong. The Dons’ only defeats since the Carlton nadir have come against the Magpies, and Richmond. They enter today’s game against Hawthorn as a live chance to make the finals, and on form would do some damage if they qualify.

So what’s changed? Coach John Worsfold, whose media appearances became increasingly tetchy in the period around the Blues defeat, publicly insists very little is being done differently behind the scenes. Several club insiders spoken to by Fairfax Media this week agree. Still, it is a cold, hard fact that the revival coincided with the departure of Mark Neeld, whose game performance coach role was made redundant by a bravely timed decision days after the Carlton game. That it was such big news at the time owed significantly to the fact that it is so unusual for clubs to part ways with coaches – senior or assistant – mid-season. But Essendon’s powerbrokers decided that it was riskier not making a change they felt needed to happen, than letting things roll on. 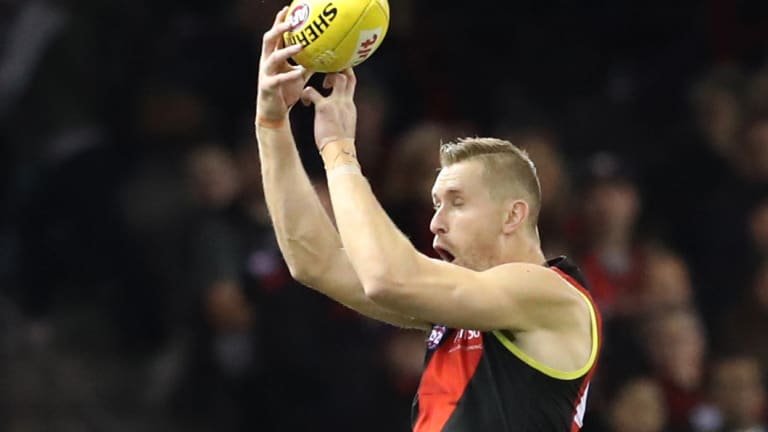 To suggest the Bombers are back in the mix purely because Neeld was moved on would be overly simplistic. That’s not to say it hasn’t made a difference. It was noted privately this week that Neeld’s departure may have been the circuit-breaker needed. It was a move designed to enhance communication channels, and looks to have worked.

Whatever the exact dynamics, Essendon have been considerably more aggressive at the selection table, and in-game. The Bombers’ rapid ball movement had been a hallmark of their finals run in 2017, but early this season their football had become staid. Repeated chipping backwards in the Anzac Day game, and an over-reliance on handball in the round seven loss to Hawthorn, typified a side low on confidence. But rather than cower at the selection table, Worsfold – with the gumption of a man who had weeks earlier been given a two-year contract extension – brought in youngsters Dylan Clarke and Jordan Ridley for the round nine meeting with Geelong, while also recalling Kyle Langford, who had consistently been overlooked despite strong VFL form.

Langford has been a revelation, with his incisive kicking inside 50 making a substantial difference to the Bombers’ cause. Shaun McKernan also got an extended run following the injury to Joe Daniher, increasing the feeling around the club that performances at the lower level would be rewarded. Matt Guelfi had already been tested for a few weeks earlier in the season but was brought back for the Geelong game and hasn’t missed since. Likewise Matt Dea has again been a regular in defence, doing his job most weeks despite being no frills.

Statistically the big difference has been defensive. Essendon have gone from conceding the third-most points across the first eight rounds to the third-fewest since. That was identified this week by star Zach Merrett, who said the Bombers’ revival had come on the back of players committing to building the most ruthless defence in the AFL.

The Bombers also identified transition running as a key element of their game, and had a mid-season fixture that was reasonably accommodating for focusing on that area around the bye rounds. In a similar vein, the Dons’ April and May struggles coincided with a trying period in their fixture, repeated short breaks that followed as a result of Anzac Day falling on a Wednesday. Their opponents that day – Collingwood – also endured patchy form in the few weeks following the game.
Daniher, it emerged, had been playing lame, with a groin issue leaving the 2017 best and fairest miles from his best. That had a two-fold effect, as not only was he down offensively, but couldn’t offer much defensively either. McKernan, out for the season after a hamstring injury two weeks ago, doesn’t have Daniher’s tricks, but he is a competitive beast and would at least bring the ball to ground regularly as well as posing a scoring threat. Mark Baguley was shifted forward after the season-ending knee injury to Josh Begley. The Baguley decision has proved inspired, with his pressure inside 50 typical of a much more desperate outfit. It is no surprise either that Essendon have fared much better when dynamic Orazio Fantasia has been fit. In the 11 games the small forward has played, the Bombers are 8-3.

Michael Hurley missed a couple of games through injury after the Carlton loss. Earlier in the year, he was among the biggest culprits when it came to painful ball use in defence. Since returning he has been more accountable, most notably in beating Lance Franklin last week, and his slightly reduced disposal numbers have helped rather than hindered the Dons. Then there is the run from defence. Adam Saad’s form has improved, but it’s also easy to forget that Essendon’s early-season malaise coincided with Conor McKenna’s three-match suspension for biting. 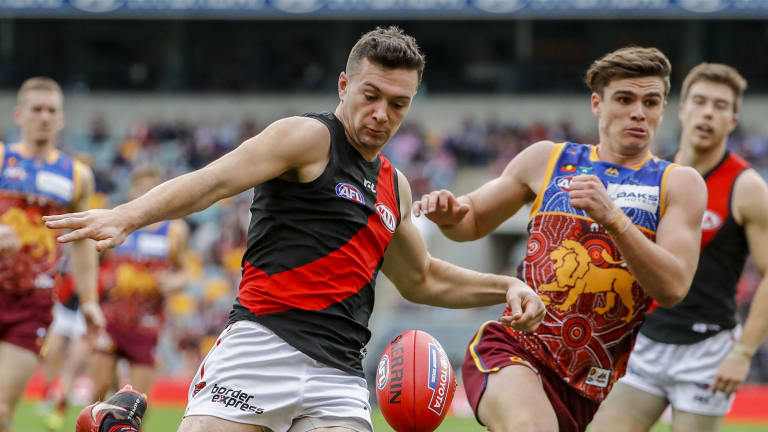 And Essendon’s midfield has gone from a widely acknowledged weakness to a strength. Devon Smith has continued his excellent season and Dyson Heppell has stepped up after an indifferent start to the year. Add to that Langford and David Myers both contributing well, Darcy Parish returning from injury, Fantasia and Jake Stringer able to have an impact in bursts, and Tom Bellchambers having an excellent year in the ruck, the pressure has been eased from Merrett, who had been carrying too much of a burden in the early rounds, and was an easy target for opposition taggers.

While some supporters will understandably feel otherwise, there is a strong view at Tullamarine that 2018 will not be a waste if the Dons can’t make it to the finals. To borrow a phrase associated with Essendon, the loss to the Blues might prove to be a line in the sand moment. If not for the defeat, the team, coaching panel and game style might not have undergone the tinkering required to make a long-term difference. One Essendon insider said this week that some players thought it might all fall into place this year after the finals run of 2017, and that since the Carlton loss attitudes had changed. It’s hard to think of that as a bad thing.