James Hird may think Essendon are capable of winning the flag but there's one major problem – the Bombers face an enormous fight simply to make the finals.

They had been the hottest team heading into Saturday's clash against arch-rival Hawthorn, winning eight of their previous 10 matches, but a four-point loss at the MCG means their top-eight hopes could be shot. They almost certainly need to win their three remaining games against St Kilda, Richmond and the Power in Adelaide to have any chance of remaining alive come September. 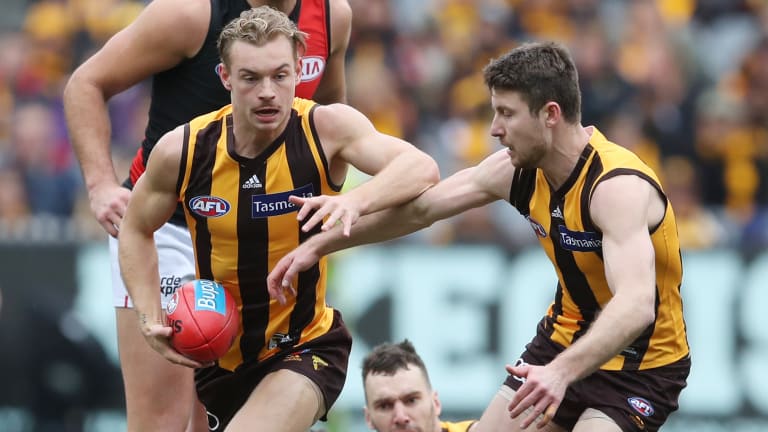 For the Hawks, they tightened their hold on the top eight – and can largely thank midfielder Tom Mitchell and forward Jack Gunston, the latter delivering five goals.

Mitchell finished with 43 disposals (13 clearances), strengthening his bid for the Brownlow Medal, but Gunston arguably had more of an impact.

"We were really pleased with the influence he (Gunston) had. The Bombers, their back half has been performing really credibly, particularly (Cale) Hooker and (Michael) Hurley, their two key defenders are such pivotal players … for 'Gunners' to step up and kick goals for us at crucial times was pretty important," Hawks coach Alastair Clarkson said.

"But Tom Mitchell had a very influential game for us as well, as did a number of other players. We were pleased with the overall evenness of the contribution we got from players today."

Mitchell's efforts included 29 touches (430 metres gained, 10 clearances) to half-time – equalling a record (since Champion Data began recording statistics in 1999) he shared with former Eagle Matthew Priddis. Mitchell also had the same half-time return (29) against Collingwood in round one. The Bombers had a dozen players rotate off him but none were able to quell his influence.

Leading by a goal at the final break, the Hawks could not initially capitalise despite locking the ball inside their forward 50 until Brendon Goddard had a moment he would rather forget. The Essendon veteran stepped over the goal-square line when kicking in, the penalty meaning there was a ball up on the edge of the square. The ball was bunted towards the Hawks' goal, and Gunston delivered a successful mid-air tap. Accustomed to delivering in the big moments, he would soon convert a 50 metre set shot, the Hawks taking control. 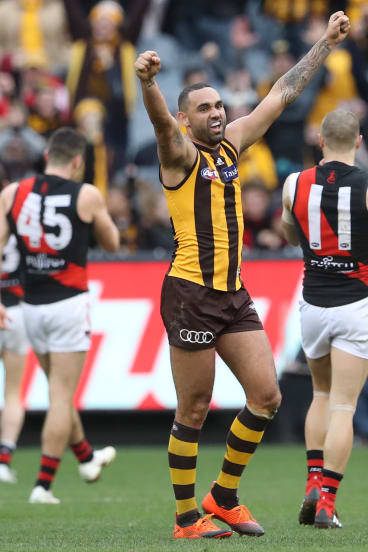 The Bombers would continue to fight, and prospered from a questionable decision by Hawks youngster James Worpel to play on and turn the ball over. Andrew McGrath, Jake Stringer – superb all day but nursing a sore ankle – and Cale Hooker, sent forward, would all goal – the latter with 1:40 minutes remaining.

That drew the Bombers to within four points but the contest appeared over when Worpel responded to his earlier error by fending off Michael Hurley and running into an open goal. Befitting one of the games of the year, the Bombers threw one last punch – Travis Colyer drilling a long running goal from 50m with 13 seconds remaining. However, the Hawks won the ensuing centre bounce – and the four points were secure.

"Hawthorn, in terms of their experience and experienced players, is what we are aiming to build in our group," Bombers coach John Worsfold said.

On the same afternoon when new rules were tested in a VFL game in a bid to ease congestion, the manner in which this clash was played – with AFL chief executive Gillon McLachlan on hand – gave argument to the game being in good shape.

Zach Merrett, in his 100th match, was stunning with 42 touches, including nine clearances, while Darcy Parish also found plenty of the ball. Skipper Dyson Heppell, while hard at the contest, turned the ball over too often. Adam Saad and Conor McKenna provided drive and from half-back, a key part of the Dons' recent success, but they could not generate the desired run in the final term.

The Bombers wanted to play fast football – and did just that early in the first term through the run of Merrett, Parish and Orazio Fantasia. They attacked through the corridor and, at one stage, were 11-0 in uncontested marks. Anthony McDonald-Tipungwuti, Stringer and McKenna would all capitalise as the Bombers went at an astonishing 86 per cent by foot. The Hawks took time to adjust but when they did, the contest turned. The Hawks found their run, O'Meara leading the charge, and would respond with the next three goals. 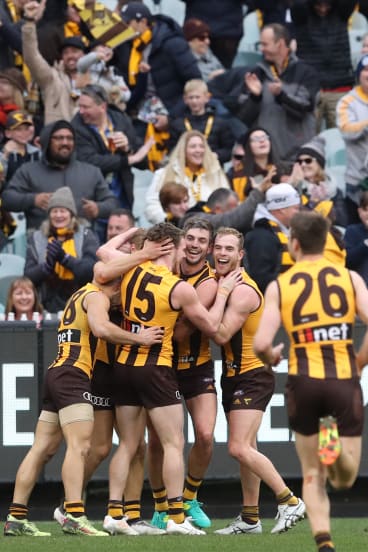 Get around him: James Worpel booted the crucial goal.

Alastair Clarkson was animated at quarter-time but it was the Bombers who were initially stung into action. In an entertaining second quarter, the Bombers returned serve, delivering another three straight goals. McDonald-Tipungwuti, one of the hardest workers, had a hand in the opening two, as did Stringer, who converted the third, capitalising on a superb long pass from Merrett.

The Hawks, though, rarely go away, and their premiership stars got involved. Burgoyne found Gunstan, who successfully snapped a goal, and Luke Breust, with only two touches to quarter-time, would deliver the next two. This was end-to-end football but, of course, there was a contentious video replay, this time Ricky Henderson awarded the Hawks' fourth when the ball fortunately kissed his lower leg. It gave the Hawks their first lead and they weren't done there, heading into the main break with an 11-point buffer.

As was the trend, the Bombers began the third term in style. Stringer had a direct hand in their opening two goals but would spend the final seven minutes on the bench once he hurt his ankle. Bellchambers and Ceglar, having a fine battle in the ruck, each would hit the scoreboard after strong marks.

There was an infuriating moment for the Hawks when Henderson's third goal was reversed to a point after the players had even lined up in the centre square. The score review backed David Myers' claim that he had touched the ball off the boot. That meant the Hawks were seven points behind, rather than one. It did not matter, for Breust and Brendan Whitecross would follow up to preserve the Hawks' lead.