With the AFL season proper just one week from shutting up shop, the fortunes of WA's two teams are hovering like a drunk acrobat who can't quite seem to get on the straight and narrow.

Fremantle, as they have done all season, twist and turn to a different beat each round, leaving their fans up and about one week, down in the dumps the next.

All the while the rhetoric from the port club sticks to the same tune as rigidly as the progress of Ross Lyon's rebuild. How the coach could even contemplate taking positives from Saturday's appalling effort against Geelong – 9th on the ladder before their obliteration of Fremantle – is beyond most Dockers fans.

In the corresponding match last year at the same venue in round 14, as Lyon's plans were being drawn up at the architect's office, Fremantle pushed Geelong all day and lost by only two points.

His response to a question after Saturday's shellacking about Fremantle's rebuild eventually led to Lyon berating the journalist over how long a successful rebuild in the AFL takes. 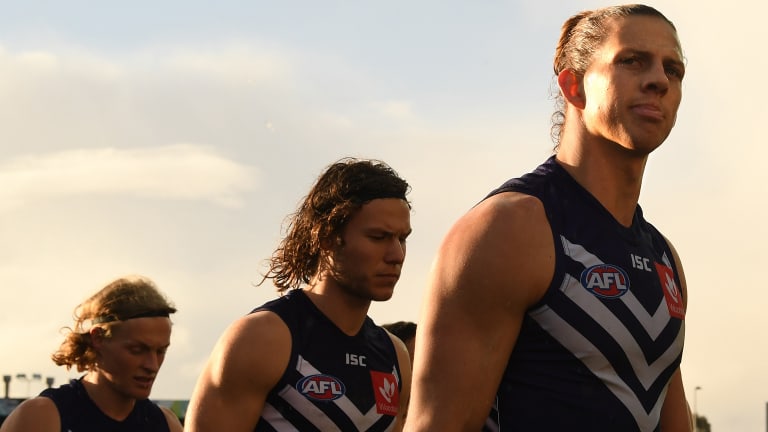 Nat Fyfe leads his players from the ground after the Geelong thrashing.

"Never as good, never as bad …  we've had a really bad loss, do you think it changes on a week-to-week treadmill or do you look at all the threads in the hole? We would say we've won eight games. We just need to firm it up. We know we're going to be better. You can draw your own conclusions. But to look at one game in isolation is silly. It's everyone's choice how they look at it. Don't look at it in isolation. Everyone can be the judge over a period of time."

The fact is, in the three-year period since the "replumb, restump…" mantra was mouthed by the coach, officially setting Fremantle on the course of a rebuild (and buying Lyon more time), the skill level at the Dockers has diminished (some feat in itself), as has on-field leadership and accountability, while the game style has remained static and, frankly, painful to watch.

Even the miserly defence and consistent forward half pressure that was a feature of Lyon-coached teams (and not really aligned to skill level) has diminished badly, as evidenced by an average losing margin of 61 points since the round six derby against West Coast, billed as the biggest between these two sides not only because it was the first at Optus Stadium but because it was expected to be evenly contested.

Looking at all the threads in the hole, Fremantle's aberrations have been constant. The builder looks like going broke before he even starts laying a brick.

For West Coast, the season has sounded a steady rhythm in the face of constant clamour, beating boisterously when most expected their tempo to break.

With no Naitanui, no Gaff, and an unfit Josh Kennedy for much of the season, the Eagles still managed to muster some impressive wins over quality opposition, but the signs are ominous after the side's 17-point loss to a spirited Melbourne side.

Without its two tall tenors up forward, West Coast can be excused for the weekend's aberration, but the real weakness seasoned-hardened opponents will likely expose come finals lies in the middle.

With Gaff now gone, opposition teams are targeting the club's next best midfielder Luke Shuey which, without the bollocking presence of Naitanui at centre square and ensuing ground-level contests, leaves West Coast a little wanting.

If they are to be more than just a backing band for the real stars of September – reigning premiers Richmond, Hawthorn and Collingwood – the Eagles must find some midfield grunt, and fast. 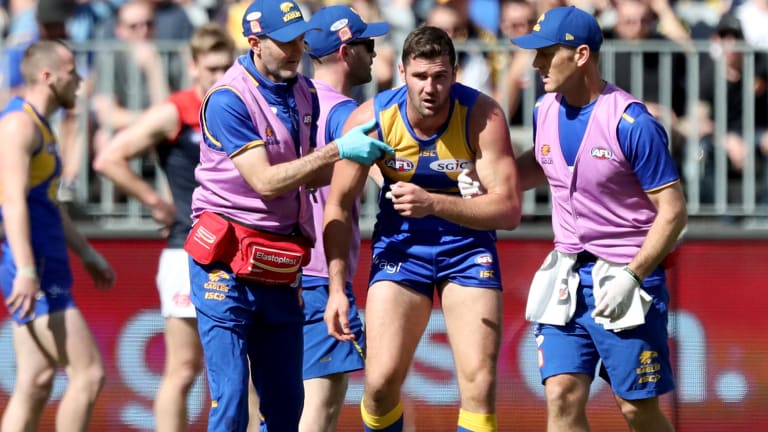 Hopes of a berth at the MCG on the last Saturday in September will depend much on whether Jack Darling can get up for Sunday's season-defining clash with Brisbane at the Gabba.

While West Coast has been the most galvanised of all sides in the AFL this season, there comes a time when even magic can't muster grand final glory (just ask Cats fans about the Gary Ablett Snr era).

With Darling playing only 10 minutes in his side's shock loss at Optus Stadium, the writing was on the wall for most of Sunday's high-stakes match.

That the Eagles willed themselves into the contest and eventually the lead speaks volumes about their cohesion and determination, two traits that could still propel them well into September.

The main concern out of Sunday's loss was how much confidence they will now carry from losing at home. But the impending return of Kennedy, who has missed the past four games with a hairline shin fracture, and Darling will likely override that.

If the Eagles get over the line against the Lions, who have pushed some of the competition's best this year, and welcome back Darling and Kennedy for a qualifying final at Optus Stadium, it should see them singing loud again, with the possibility of a second grand final appearance in four years.