Georgia Hall became the fourth Englishwoman to win a major title when she carded a closing five-under-par 67 to clinch victory at the Women's British Open, 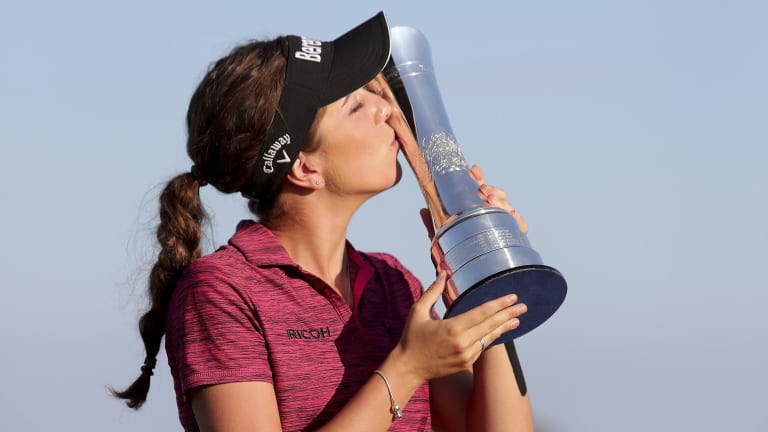 Cheered on by a large gallery, Hall finished at 17-under 271, becoming the second English player to win the championship after Karen Stupples in 2004.

"I've always joked by saying I haven't really won since turning pro and a major will be my first win and I can't believe it's actually true," the 22-year-old Hall told the Golf Channel.

"I told myself just to stay calm the whole way and not think about anything. I thought I'll cry but I think that's going to happen in another couple of hours. Hopefully I'll be alone then."

Lee started the final round in contention for a podium finish being the nearest challenger to the leading pair, Hall and Phatlum.

But disaster struck with the West Australian bogeying four times – on the seventh, 12th, 15th and 16th holes – to finish the round on three-over-par 75.

After leading the opening round and never dropping below fourth place, the 22-year-old's costly errors pushed her down to 10th place overall on 281.

I've always joked by saying I haven't really won since turning pro and a major will be my first win and I can't believe it's actually true.

She became the first English player of either sex to win a major at Royal Lytham since Tony Jacklin won the 1969 British Open.

The final round quickly turned into a head-to-head duel between Hall and overnight lead Phatlum, after South Korean Ryu So-yeon triple-bogeyed the third hole.

Phatlum, seeking to join compatriot Ariya Jutanugarn (US Women's Open) as a major champion this year, hit a series of loose drives down the stretch.

under, with Ryu (70) another two shots back in third.