North Melbourne’s finals hopes remain alive, out of the eight on percentage with 11 wins, after holding out a fast-finishing Brisbane Lions on their home deck. And with games against the Western Bulldogs, Adelaide and St Kilda to come, they’re still right in the hunt, even if they need a result or two to fall their way.

If they don’t get there, that’s still a credit to coach Brad Scott and a team widely expected to finish in the bottom four this year. The improving Lions, never quite fully switched on, played catch-up almost throughout the game and cut a 24-point deficit in the last quarter to a final margin of three, but had too many passengers on the day. 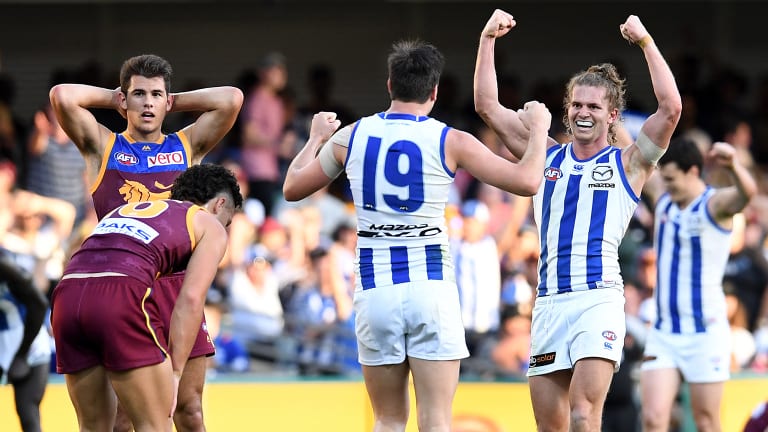 Agony and ecstasy: The Roos and Lions after the siren.

Cam Rayner, who usually oozes confidence and composure, rushed a set shot with just 30 seconds to go that would have given the Lions the game. But truthfully, it would have been a heist. The Kangaroos had more to play for and clearly wanted it more, winning the contested possession count handsomely.

They were superbly led by Jack Ziebell, who drifted forward for three sharp goals. Majak Daw, so effective up forward in recent weeks, was just as good in defence, where he was repatriated to make way for the return of Jarrad Waite, for his first game since round 11. Trent Dumont and Jed Anderson provided drive throughout.

The Lions were patchier. Young players Hugh McCluggage and Jarrod Berry were superb and Dayne Zorko finished with 35 possessions after a shaky start, but forwards Eric Hipwood and Dan McStay scored just one goal between them and a number of players – Lewis Taylor, Daniel Rich – failed to impact the contest in other ways.

They were jumped early, with the Kangaroos kicking the first three goals of the game before the home side had woken up. The Lions provide great entertainment, but they can also be loose, and North Melbourne dominated the contests on the inside and were given far too much latitude in space early.

When the Lions did switch on, they looked good: Hipwood marking on the lead for his first, then getting involved again for Lewis Taylor to score, though that was about the extent of their involvement in the game. Yet they still managed to finish the quarter in front, a bomb from Rayner giving them a five-point lead. 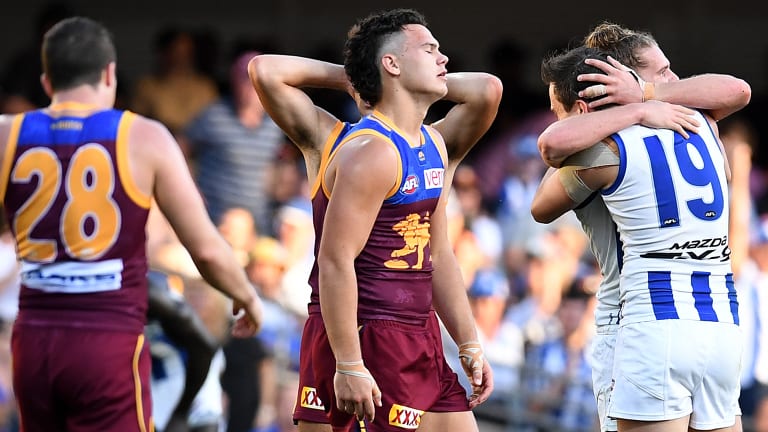 The reaction of Cameron Rayner.

But the Kangaroos were all over them in the second quarter, and their seven goals to three established a buffer that the Lions weren’t able to breach. Some of them were cheap, reflecting a lack of concentration, but North weren’t about to let those chances slip.

The Lions lifted in the third, McCluggage doing as much as anyone to keep them in the game with two goals for the quarter, and Alex Witherden, who mostly had a poor game, hitting Rhys Mathieson on the chest to bring the lead back to four points. But a pattern had been set: Jy Simpkin and Ziebell rebuffing the challenge.

That was the pattern of the game. Every time the Lions got close, the Roos found just enough to hold them at bay, Daw especially standing tall in the last quarter and their harder bodies in the contest – Ben Cunnington, Jamie Macmillan, Anderson – getting the job done.

Like the Lions, they too had to score without a major contribution from their key forwards, with Ben Brown shut down well by Harris Andrews, and Jarrad Waite looking rusty. But they had 10 individual goalkickers, with Kayne Turner especially lively and Ziebell a constant threat.

In the rooms after the game, Rayner was in tears, feeling he’d cost his side the match with his missed shot. He shouldn’t. Perhaps it was another game that got away for the Lions, but it wasn’t one they truly deserved to win. They’ll be eyeing the end of season now; North are still hanging on to higher September ambitions.