In a quiet spot with a single tear starting to roll down his eye, John Shelton talks about the kid who walked into his stable as a teenager and is now his "son". A "rogue", he describes him as, but one he  immediately warmed to.

"I've got no kids and every race he rides in I see," Shelton says, the sole tear slowly creeping down his cheek as he talks of Adam Hyeronimus. "He's a lovely kid.

"He came up [to continue his apprenticeship] and didn't like it. He went back home [to Cowra] and I thought, 'I don't think he'll come back'. Then he rang and he said, 'I might come back'. That was the end of the section." 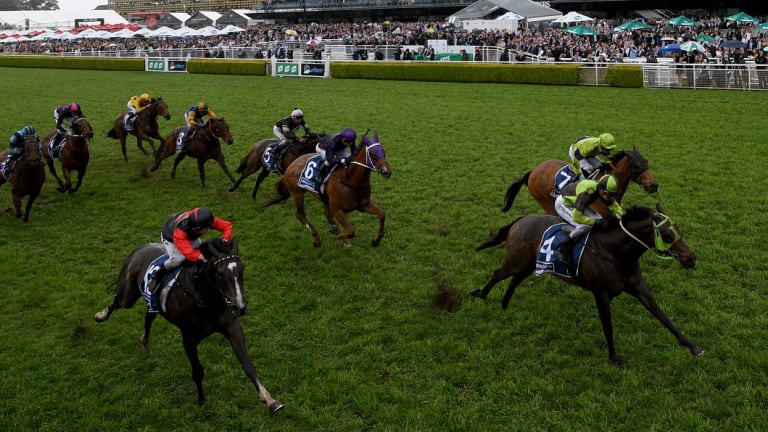 Hitting the heights: Adam Hyeronimus drives Belflyer through on the inside to win the Kosciuszko.Credit:AAP

As he said it, the soft-talking Grafton trainer was still trying to comprehend what had just happened, a horse he wanted to put the paddock a couple of months ago hanging around and winning the first $1.3 million The Kosciuszko for country-trained horses.

It was his biggest win on a racetrack. Ditto Hyeronimus. The first prize purse was worth $685,000.

And the fact they did it with a $71 outsider just made it even sweeter.

Asked what Shelton means to him, Hyeronimus said: "Everything. Everything. You can't describe it. He's just the best. He's done so much for me."

Added Hyeronimus' mother Narelle: "John's like another father to him. He's such a lovely guy and they got on so well. He helped pick up the pieces for Adam."

Most people had expected another Shelton protege, Ben Looker, to be the toast of The Kosciuszko party.

He was on early favourite Victorem, which lost top billing to the heavily backed Don't Give A Damn and then lost his wheels in the Randwick wet. And that's the only reason Hyeronimus jumped on Belflyer, the Ramornie Handicap runner-up.

Belflyer was one of the last horses picked up by one of the 12 slot-holders, drawn out from a raffle to scramble and pick up the best NSW bush-based horses.

Thad King, whose mates bought about $100 worth of tickets, brokered the deal to partner up with Shelton and Belflyer, which came with a burst down the middle of the track to beat Suncraze ($15) and Awesome Pluck ($9).

He joined with his mates and sealed the agreement on one condition: They could be lodged in the ownership of the horse going forward.

Asked whether he had a house, King said: "No, but that's going to go a long way to getting me a deposit.

"We came in late and it worked in our favour. People were coming to us. Belflyer was at the top of our list and we were able to do a good deal and we have a part of the horse going forward."

Said Shelton: "This is the biggest thrill I've ever had on a racecourse. It's a day I'll never forget. I set a plan and sometimes they don't come off, as you know. I'm amazed. I knew he'd always come with a run."

Don't Give A Damn was very well supported but laboured in fourth as Victorem finished more than a length further back in fifth.

"He just looked to be climbing a bit in that ground and might not have handled that ground," Don't Give A Damn's trainer  Danny Williams said.