CHARLOTTE, N.C. — As the N.B.A. prepares for All-Star Game festivities this weekend in Charlotte, N.C., the backdrop to the celebration is unequivocally political, as nearly everything in the divided state seems to be these days.

The event was supposed to be in Charlotte in 2017. But in March 2016, the Republican-controlled legislature passed a law, known as House Bill 2 or HB2, that invalidated local government ordinances establishing anti-discrimination protections for lesbian, gay, bisexual and transgender people. It required people in publicly owned buildings to use restrooms that corresponded with the gender listed on their birth certificate.

Supporters called the law a necessary public safety measure but opponents condemned it as intolerant, and a backlash emerged, chasing away businesses, conventions and concerts and testing sports leagues normally averse to political debates.

The N.B.A. moved the All-Star Game from Charlotte to New Orleans. The N.C.A.A. and Atlantic Coast Conference removed championship games and tournaments from the state, a stunning blow given the hold college basketball has over North Carolina.

Political scientists say the law contributed to the governor at the time, Pat McCrory, a Republican, losing his subsequent re-election by just 10,000 votes.

“There was a sense that the election was a referendum on HB2, and a verdict was rendered,” said Pope McCorkle, a professor of public policy at Duke University and a former Democratic political consultant.

A year later, with the N.C.A.A. saying the state had 48 hours to change the law or lose the chance to host any N.C.A.A. championship games through 2022, House Bill 2 was partially repealed.

That was enough for the N.B.A. and it has allowed Charlotte to present itself as a welcoming place, however much some activists believe the repeal did not go far enough.

For sports organization, the partial repeal allowed them to return to the state, a growing and important market. Within weeks the N.C.A.A. and A.C.C. returned championship games to North Carolina, and the N.B.A. quickly awarded Charlotte the 2019 All-Star Game. N.B.A. commissioner Adam Silver said he understood concerns that the repeal wasn’t enough, but believed it eliminated “the most egregious aspects of the prior law.”

That the N.B.A. and the N.C.A.A. found themselves in the middle of a pitched political brawl in the Tar Heel state was fitting. Sports have long been intertwined with politics in North Carolina.

Kenan Memorial Stadium, where the University of North Carolina’s football teams have played for 90 years, was originally named for William R. Kenan, a 19th century merchant who led the massacre of dozens of black residents of Wilmington. In 2018, the university decided to name the stadium instead for his son, William R. Kenan. Jr., a former university trustee and businessman. 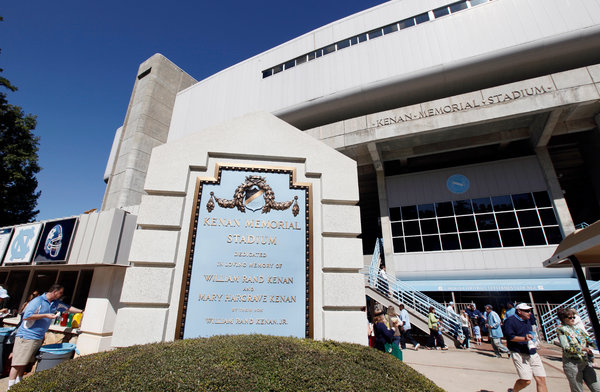 In the 1960s, Dean Smith, the longtime coach of North Carolina’s basketball team, was a force for integration and civil rights in the state. More recently, former North Carolina athletes helped end plans to return a Confederate monument to campus.

Activists and Democratic politicians praise the role sports organizations played in overturning House Bill 2, but only to a point. The partial repeal overturned the bathroom portions of the law, but largely left the other provisions intact. They see it as a less discriminatory law that is far from perfect.

“Philosophically it wasn’t the correct fix, but it achieved a good objective,” said Representative Deb Butler, a Democrat and one of North Carolina’s few openly gay lawmakers. She voted against the partial repeal.

Kathy Behrens, the N.B.A.’s president of social responsibility, said the league has equality principles that each venue, vendor, hotel, or other business the N.B.A. works with for the All-Star Game is required to adhere to.

Among other requirements, she said, each partner must “ensure that any restroom it provides for its personnel or the general public will be open for use by all individuals consistent with their gender identities.”

Still, some states, including New York and California, maintain bans against any official state travel to North Carolina. Netflix recently opted to film “OBX,” which is set in North Carolina’s Outer Banks, in South Carolina because of the bill. A lawsuit by the American Civil Liberties Union challenging portions of the bill is pending.

“This debate should never have been about sports,” said Chris Brook, the legal director of the A.C.L.U. of North Carolina. “Basketball is something of a religion here in North Carolina, but HB2 and HB142 at bottom are about people’s lives and their rights to live a public life.”

North Carolina’s political battles continue. The Supreme Court will rule this year on partisan gerrymandering in the state, and one of the North Carolina’s seats in the House of Representatives remains vacant because of credible voter fraud allegations. A bloody state budget battle looms.

For the moment, though, sports is not on the docket.