North Melbourne coach Brad Scott says the AFL fixture is clearly compromised, but that’s for others to worry about as he concentrates on leading his team to an unlikely finals campaign.

The Kangaroos’ run home will consist of four clubs out of finals contention – Brisbane, Western Bulldogs, Adelaide and St Kilda – in what looks to be the softest draw of any team for the remainder of the home and away season. 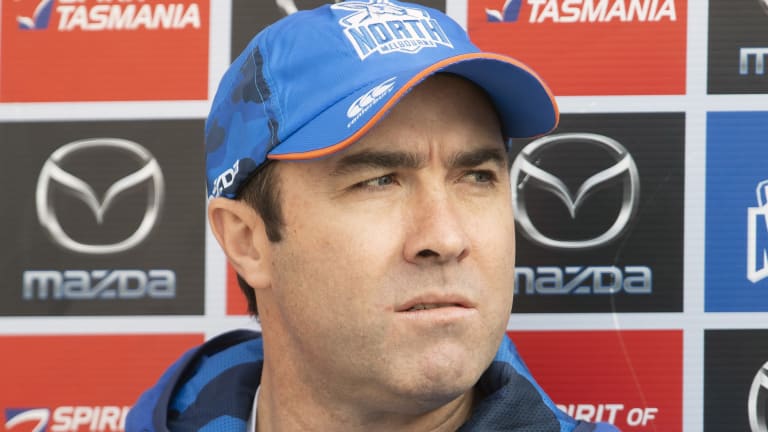 “It’s compromised, there’s no doubt about that,” Scott told the media on Wednesday afternoon before training, adding the fixture was not balanced.

“So how we can continue to work on ways to improve the evenness of the competition and certainly of the fixture to give everyone an equal opportunity is really important.

“But the reality is, while we’ve got 18 teams and 22 games, I don’t think anyone’s going to nail that. Plenty have tried but no one’s nailed it. We’ll keep trying.”

With many – including several senior figures at the club – believing that North Melbourne were in for a painful year at the beginning of the season, the Kangaroos have been one of the shock stories of 2018.

Scott’s Roos won seven of their first 11 games and despite a lean patch in recent weeks, find themselves just a game and percentage behind 6th-placed Melbourne.

And even the coach admitted it’s hard not to look around the corner towards September, as he tries to go cold turkey on the ladder predictor.

“I’ve been tempted a couple of times,” Scott smiled.

“But I think if I start doing it then it’s very hard for me to tell the players to not do it and focus in on the moment.”

The moment begins with a game against Scott’s old side at the Gabba, with the North Melbourne coach pointing towards Brisbane’s two wins over Hawthorn and their thrashing of Carlton as reasons to be wary.

With star midfielder and brownlow fancy Shaun Higgins to miss the clash after undergoing minor knee surgery, Scott said key position player Ben McKay – twin of Carlton’s Harry – and prized draftee Luke Davies-Uniacke are the two likely to be considered as his replacement.

Spearhead Jarrad Waite is a chance to return for Saturday’s clash, although Scott said a decision was yet to be made whether it would be this week or next week.

“He’s been probably ready for a little while … we’ve just got to decide when we’re comfortable pulling the trigger.”

And in some more good news on the injury front at Arden Street, Scott said key midfield cog Ben Jacobs was likely to play before the end of the season as he recovers from concussion symptoms.

“He’ll need to build up before he plays but we’ve got a pretty strong feeling that he’s turned the corner.

“He’s not too far away, unfortunately we can’t put an absolute time frame on it other than to say, we expect him back this year.”