Israel Folau may not be able to rescue Australia's Rugby Championship hopes but he could well be back for the next two assignments for the Wallabies, beginning next Saturday night against the Springboks at Brisbane's Suncorp Stadium.

After two heavy defeats against the All Blacks to ensure the Bledisloe Cup remained over the Tasman once again, the Wallabies have the chance to put some wind back in their sails against South Africa and Argentina, who they face a week later at Cbus Super Stadium on the Gold Coast. 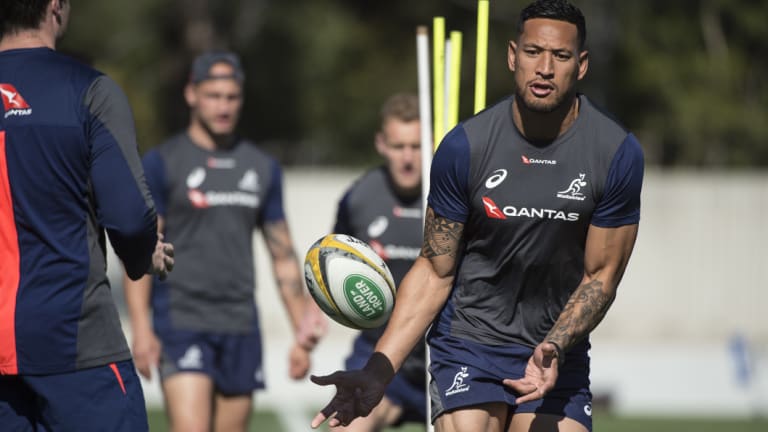 Fast healer: Israel Folau is in the frame to make a quickfire return from injury.

Folau was named in the 31-man Wallaby squad for the pair of Tests, along with prop Taniela Tupou, who would add some much-needed muscle and tackle-breaking ability around the park if he satisfied Michael Cheika and his medical staff.

Folau had been ruled out for a month with an ankle injury sustained in the Bledisloe opener in Sydney and missed the return bout at Auckland's Eden Park. He now rated as a 50 per cent chance of making it onto the field in Brisbane, although Cheika could yet err on the side of caution given his importance to the group.

Backrower Lukhan Tui said Folau was hopeful of playing and was in an upbeat mood going into camp at Sanctuary Cove on the Gold Coast.

"I have spoken to him a few times and he is doing well and in high spirits, hopefully he is right to go," Tui said.

The 'Tongan Thor' Tupou has been battling a hamstring concern and wants to throw his 135kg frame into the mix against the Springboks. He has long been regarded as one of Australia's best young talents and the Reds man believes he would rise to the occasion in front of a home crowd.

Tupou said he wanted to be fully fit before his return to the top level and would be doing his utmost to convince Cheika that he was primed to be deployed against the Boks.

“It’s one of the reasons I didn’t want to play the All Blacks because you don’t want to play the best in the world at 80 per cent,” Tupou said. “I want to go into a Test at 100 per cent to do everything I’m supposed to do, not 80 per cent and be made to look bad. If I get the chance to play this weekend, if Cheik wants to start me, I’m going to make sure I’m fully ready to go.”

There were three new faces in the squad for the next phase of The Rugby Championship, with Brumbies lock Rory Arnold and Reds duo Brandon Paenga-Amosa and Caleb Timu included.

Much of the air has already gone out of the Wallabies Rugby Championships campaign after back-to-back defeats but they need to bounce back hard in coming weeks, having lost six of their past seven Tests.