The world around Caitlin Foord had been engulfed in the tumultuous fall-out from Alen Stajcic's sacking as coach of the Matildas and all the Sydney FC striker wanted to do was escape that.

Since January 19, she sought solace away from the attention, scrutiny, allegations and innuendo surrounding the Matildas' team culture and found that in the W-League. 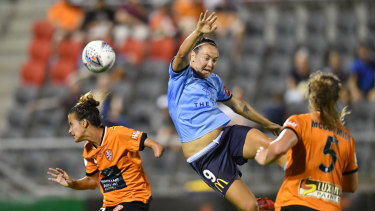 Precision strike: Sydney FC’s Caitlin Foord has produced goals throughout the year after her move to be the club’s centre forward.Credit:AAP

With all the public focus centred around the national team, the domestic competition seemed to go by unnoticed for Foord and if there's been a silver lining to the bitter saga, it's been the attention put back to her club football.

"If anything it’s been annoying," Foord said. "But at the same time, it’s been nice that Sydney has been a distraction and you do have a job to focus on."

Three goals in as many weeks since his dismissal puts Foord in fine form for Saturday's grand final clash against Perth Glory where she will go head-to-head with close friend Sam Kerr in a clash of the competition's two best strikers.

There will be plenty on the line for the pair, however Foord believes it will also be a showcase for the potential strike partnership for the Matildas at the 2019 Women's World Cup in France, should the next coach choose to revert to a front two attacking partnership. Behind Kerr, Foord has emerged as the most lethal striker in the competition having bagged 10 goals in her first season as a centre-forward at Sydney FC.

"I believe we both deserve to be up there. I think we actually play really well together and we connect really well when we’re up front," Foord said. "I've said it before that I’d love to see myself up front, that’s where I can be at my best."

Sydney FC coach Ante Juric remains adament Foord is best when closest to goal and Foord says her future lies there having successfully adjusted from a wingback to a centre-forward. Her versatility remains an asset for any team she plays for, but she says becoming a deadly finisher did not come naturally.

"For me it was weird coming from being a back to up front. It was about getting that confidence in front of goal, taking the shot," she said.

It meant Foord couldn't just rely on sharpening her shooting at the training ground with Sydney FC but underwent extra sessions at a football facility in Seven Hills where she focused solely on striking the ball and being more composed in front of goal.

"I have been doing extra sessions … I’ve been going there throughout the season. It was about getting shots off again. It was about feeling where I need to hit the ball. That’s been a massive factor this season," Foord said.

Sydney FC's veteran striker Lisa De Vanna is a chance to play in Saturday's grand final having returned to training on Wednesday following an injury.