The 29-year-old, who hasn't placed higher than ninth on the World Surf League tour this season, was beaten by Japanese young gun Kanoa Igarashi 12.17 to 10.77 in their elimination match-up at Teahupo'o. 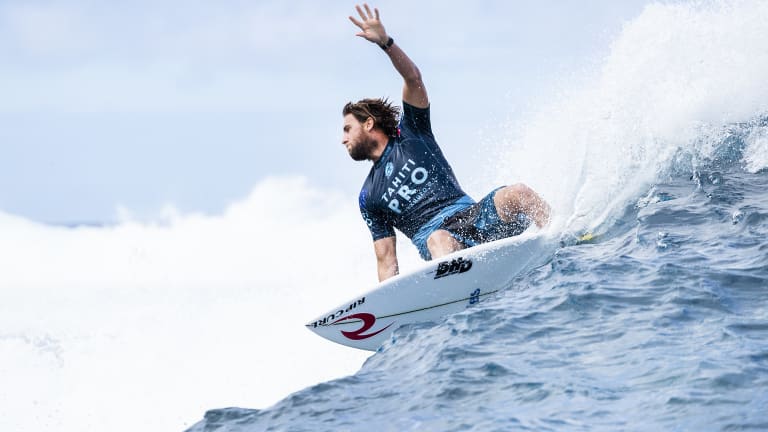 Matt Wilkinson in action in the Tahiti Pro.

The goofy-footed Australian took the lead with two carving runs earning him scores of 5.50 and 5.27.

But Igarashi snapped back with huge turns on consecutive waves to bank runs of 6.27 and 5.90.

The New South Welshman lost wave priority and attempted a 360 to turn the tide of the heat but to no avail.

Wilkinson, who finished fifth in the past two title races, was left irritated by Igarashi's tactics during the head-to-head battle.

"That was pretty tough. I wanted to put a couple of scores on the board doing turns and then kind of hung (out) for a barrel," Wilkinson said.

"I feel like they probably could have told him to move up a bit with priority but there was nothing I could do for the last 10 minutes.

"If a good wave had've came he just would have taken off halfway along it and I couldn't have got a score."

The Australian is fighting to qualify for next season with five 25th-place finishes to go along with a 13th and ninth.

But Wilkinson is hopeful his fortunes will change over the four remaining rounds.

"It's been pretty frustrating for me. I've had some pretty good heats that have just not gone my way," he said of his 2018 campaign.

"There's still a lot of events to go. Two years ago in the first four events, I got three big results and ended up in the top five.

"Maybe I can just do it in reverse this year and end up back at the top end, or hopefully at least in qualification."

Australian world No.2 Julian Wilson's world title hopes suffered a serious blow when he was upset by local wildcard Tikanui Smith in the first of the elimination heats.