Home » Sport » Gaff's apology after eight-match ban: 'People that I’ve spoken to … know the world of pain I’m in' 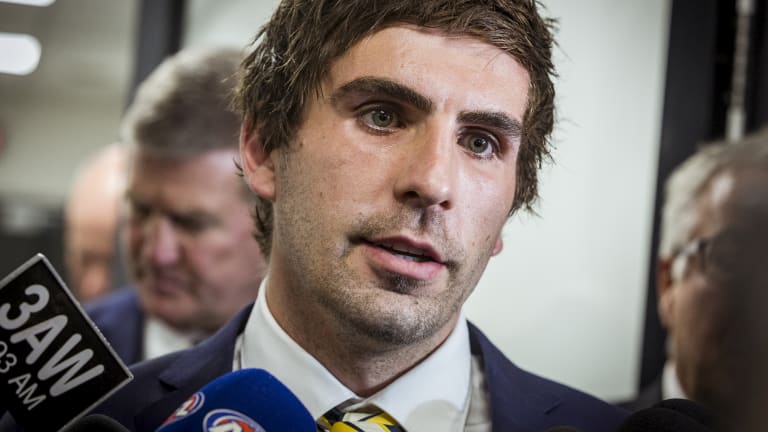 Andrew Gaff's season is over, and he may have played his last game for West Coast after being suspended for eight matches by the AFL tribunal on Tuesday for his left-arm strike which broke the jaw of Andrew Brayshaw, leaving the Fremantle youngster unable to eat solids for a month.

After a more than two-hour hearing, the tribunal jury of Wayne Henwood, David Neitz and Shane Wakelin took 14 minutes to deliberate before settling on their penalty after the Eagles star pleaded guilty to the charge of intentional conduct with severe impact to the head, stemming from Sunday's Western derby at Optus Stadium.

Issuing a short statement as he left the tribunal, Gaff said the previous 48 hours had been the toughest of his life.

“First of all I just want to say I’m so, sorry to Andrew and the Brayshaw family for the pain I’ve caused them over the last 48 hours," Gaff said.

“I respect the Brayshaw boys so much, and the way they go about it. I’m really disappointed, I own my actions, and it really hurts a lot.

“The last 48 hours have probably been the toughest couple of days of my life. People that I’ve spoken to, and people that have seen me throughout that time, know the world of pain I’m in, and how much I’m suffering. I see myself as a caring, gentle and measured person, and that’s why it’s disappointing, so much more. 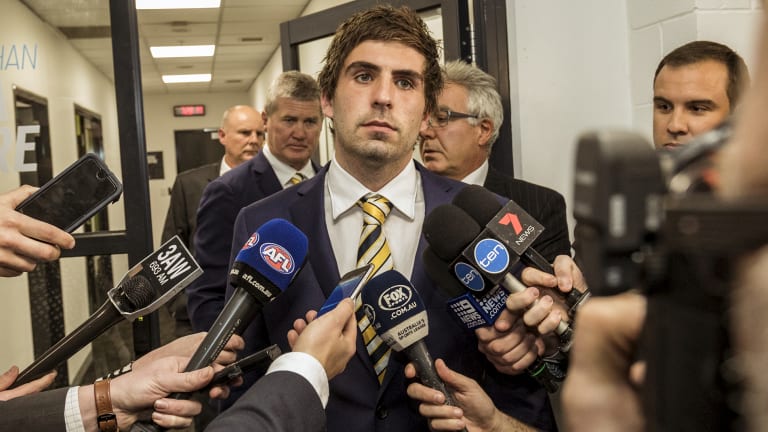 “For the time being I’m going to surround myself with my friends and family, and those who care for me most.

“But once again, I just want to apologise wholeheartedly to Andrew and I hope he gets better soon."

AFL counsel Jeff Gleeson QC had argued for a penalty of between eight and 12 weeks, claiming that the incident was “unrestrained in its execution, ferocious in his impact, and grave in its consequences.”

Gaff’s advocate David Grace QC argued that such a penalty would be “manifestly excessive”.

“I feel sick that I hit Andrew in the face. [I had] absolutely no intention to hit him where I hit him. I tried to do a similar hit as to what I did about 10 seconds earlier with my right arm,” Gaff said.

“Once I saw him lying on the ground i just instantly felt sick. Mentally I didn't want to keep playing. Physically I was able to keep playing…[but] I felt shattered.”

Mr Grace submitted that across approximately 270 games of football at all levels, Gaff had never been reported, fined or reprimanded.

Mr Grace also presented vision of several incidents in the lead-up to the strike, highlighting that Gaff’s run had repeatedly been impeded by his opponents.

These incidents included scragging from Brayshaw on Gaff only moments before the major blow. That led Gaff to create space between the pair by using his non-dominant right arm to strike Brayshaw’s chest.

Gaff said he had been confident of striking Brayshaw in the chest again, claiming Brayshaw’s downward movement had caused the Docker to be hit high on the second occasion, rather than in the chest, as had occurred only seconds earlier.

In cross-examination, Gaff rejected a suggestion from Mr Gleeson that the Eagle had swung as hard as he could in the process of landing the second punch, which unlike the earlier strike was made with his dominant arm.

Gaff also rejected Mr Gleeson’s clam that the Eagle had acted out of frustration.

Character evidence in the form of statements from an abundance of people including former Carey Grammar school principal Phil De Young, Eagles Brownlow medallist Matt Priddis, and representatives from several charities with which Gaff has been involved.

In one statement, former Eagles coach John Worsfold recalled times Gaff had been subjected to repeated targeting from taggers, with the now-Essendon coach saying Gaff “never reacted because it was just not in his nature”.

Fremantle doctor Ken Withers gave evidence via telephone that the blow had “badly displaced” the alveolar bone in Brayshaw’s mandible. Brayshaw underwent surgery following the incident, and Dr Withers reported that four of Brayshaw’s lower teeth, and one of his upper teeth, may not be viable, meaning the teenage Docker may need dental implants. 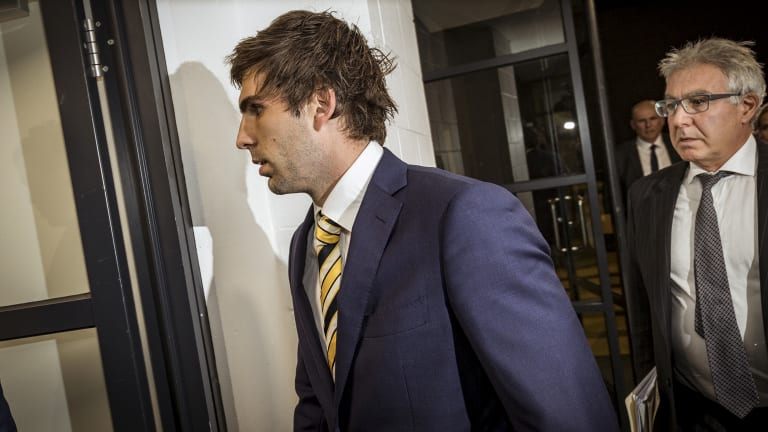 Andrew Gaff arrives at the tribunal.