Huntington Beach: Australian surfing great Stephanie Gilmore has her name etched on the Walk of Fame at Huntington Beach, but what she really wants is her name finally on the US Open trophy.

With the first round of competition at the famous Californian break delayed until Friday US time (Saturday AEST) due to small conditions, Gilmore joined an elite group of surfers with a plaque bearing their names in the footpath opposite the beach.

The six-time world title-holder was honoured on Thursday with retired former men's champion Mick Fanning also inducted though he wasn't at the ceremony.

"It's truly an honour to be here – I feel like the whole street is surfing's icons," Gilmore said.

"It's a special feeling to be included amongst such surfing greats."

The 30-year-old has never won at Huntington and leading the women's world tour from American Lakey Peterson by just 2145 points, she is desperate for a break-through victory to collect the winner's 10,000 points.

There are three competitions remaining after the US Open with Hawaii the last stop in November. 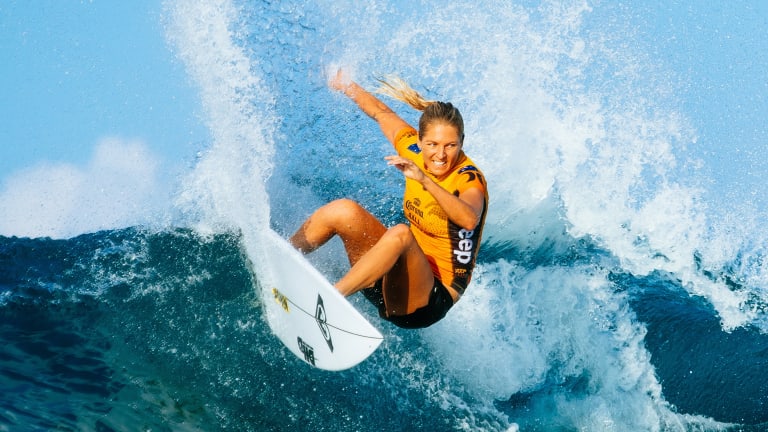 Australia’s Stephanie Gilmore has been inducted into surfing’s Walk of Fame.

Reigning world champion Tyler Wright, who is currently fifth, isn't competing with flu forcing her out of her second successive event and putting a large dent in her hopes of a third straight crown.

Gilmore says she is feeling the heat from Peterson.

"In the past I've been able to get a few wins here and there and relax between events but with Lakey right there in every single event I just can't let off the gas," Gilmore said.

"It's whoever can stay consistent not just in the quarters or semis but in the final at every single event, they're going to be the world champ.

"It's tough but it's exciting – I haven't felt this sort of drive in a world title race for a few years."

Gilmore bombed in the second round at the US Open last year which cruelled her chance of joining compatriot Layne Beachley with seven World Surf League crowns.

She admitted the small conditions could again prove tricky this year, with California girl Peterson more at home.

"She's from a couple of hours up the road but I know when I'm at Bell's Beach or Margaret River it's still Australia, it's still home," Gilmore said.

"I know the swell forecast is really bad so it's going to be tough for everybody so may the best woman win."

The men's qualifying series is also being held this week while their championship tour is next in Tahiti from August 10.