Home » Sport » Goldsack declares himself ready to take on the Eagles

Tyson Goldsack has declared himself available to boost Collingwood's depleted defensive unit for their qualifying final against West Coast in Perth on Saturday, after he got through his second game back from a knee reconstruction in the VFL on Sunday.

The 31-year-old tore his ACL in March but has made a miraculous recovery to feature in the VFL the last two weeks. The 2010 premiership player said it was up to the coaches to decide whether he would be on the plane to Perth or not. 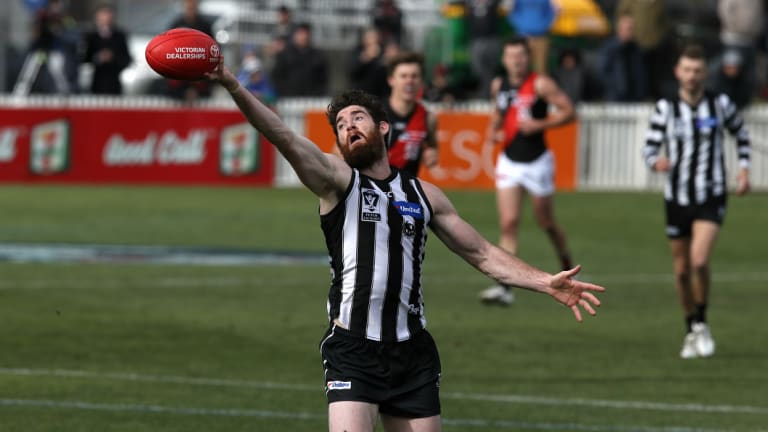 Handy boost: Collingwood’s 2010 Premiership defender says he has proven himself ready for a return after two weeks of VFL action.

Collingwood's VFL side lost to Essendon by 34 points in the elimination final with Goldsack playing around 75 per cent game time in defence, a slight increase on last week. He only had two disposals and took one mark – a nice intercept on the wing – but his timing to the contest and running looked okay in a side that was dominated all day.

Asked whether he had done enough to convince coaches he was ready to play AFL, Goldsack said: "I hope so. It is hard to say, they [coaches] will look at that. I have done all I can in the time we had, and we always knew it would be a tight turn around … hopefully I am on that plane to Perth.

"That’s why the improvement had to be so great from two weeks ago, to last week, to this week and then six days into a possible West Coast game. It’s with the coaches now I have done what I could and hopefully it falls my way. 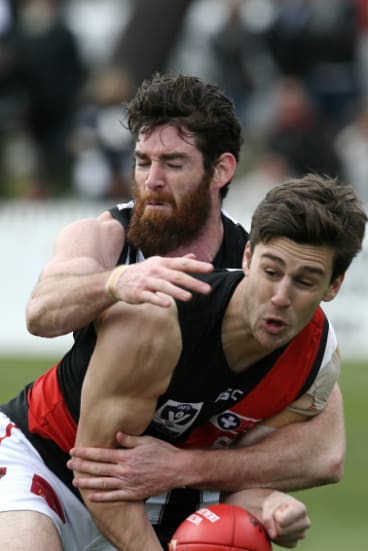 In the mix: Tyson Goldsack tackles Joe Harrison during Collingwood’s 34-point loss to Essendon in the VFL elimination final.

"It [my timing] was way out last week and we felt I’d want to improve a lot from last week to this week to give myself any sort of chance and it was an improvement. Still areas to sharpen up but I am taking some good steps."

The Pies defensive stocks have been ravaged by injury this year with Lynden Dunn and Matt Scharenberg out for the season, while Ben Reid has an injured calf. Darcy Moore (hamstring) is unlikely to face West Coast but Jeremy Howe is ready to play despite sitting out the VFL while Flynn Appleby proved his fitness in the VFL, his second game back from a hamstring injury.

Goldsack said his knee gave has not given him any trouble the past two weeks.

"It was really good. No issues at all," he said. "It is just getting used to movements again, obviously you are quite tentative going into some contests, especially when you can’t read the ball very well in the air, or when your timing is out, so you tend to be a bit hesitant. It pulled up fine. It was just my mental barriers that I needed to hurdle … and this week was a lot better again."

He also said if he didn't play against West Coast he would still push to play any possible finals after that, even though Collingwood's VFL side had been eliminated from the season. His back – which delayed his recovery by two weeks late in the AFL season – was also no longer an issue, he said.

Jack Madgen and Adam Oxley both played in the VFL loss despite playing in the round 23 AFL win over Fremantle. Key defender Madgen played from round 20 onward in the AFL while Oxley played from round 21 onward. Goldsack said they played VFL to keep them sharp before AFL finals.

Neither Madgen or Oxley stood out in a defence that was under the pump all day.

Another young defender, Nathan Murphy, who debuted in round 22 and then played in round 23, sat out the VFL game due to a slight niggle. He is expected to be available for selection against West Coast.

In good news for Collingwood fans, Scott Pendlebury was in attendance, and looking well, at the frosty North Port Oval. He sent shockwaves through Pies fans when it emerged a mystery virus had kept him from his mid-week media commitments and attending the All Australian awards.

Callum Brown was the pick of Collingwood's other listed players in the disappointing loss. He had 24 disposals and kicked three goals.

For the Bombers Aaron Francis dominated across half back while Josh Green kicked five goals and Jackson Merrett – who was de-listed last week – kicked four.

They will play Richmond in a VFL semi final next week.