Anthony Griffin has hit back at Phil Gould’s suggestion he was too “old school” for Penrith, saying the Panthers supremo could be accused of the same thing after being out of the coaching game for two decades.

Griffin was sensationally sacked with two years remaining on his contract, despite the fact the Panthers were sitting in a share of fourth spot. His side had also staged back-to-back comeback victories, giving him a 58 per cent winning rate at the foot of the mountains. 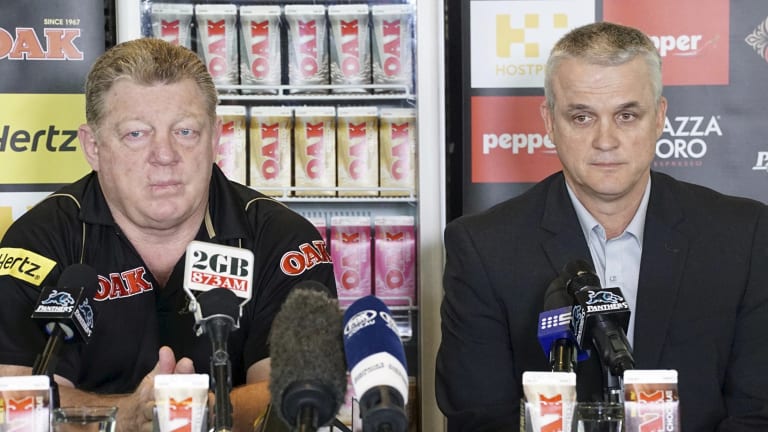 You too: Anthony Griffin says if he’s “old school”, then so is Phil Gould.

However, Gould said Griffin needed to be moved on because he had lost the dressingroom, wasn’t prepared to properly delegate to other staffers and that his methods were ‘old school.

Speaking for the first time since his sacking, Griffin hit back at the suggestions.

“I take them with a grain of salt to be honest,” Griffin told Fox Sports’ NRL 360 program.

“My relationship with Gus was very good at the start and he’s got a great football brain.

“The biggest issue we had and the reason I’m sitting in this chair is because, with me not coaching any more, we had a different philosophy on how the team should be coached.

“Not the structure or the use of staff or anything like that.”

Gould is a premiership-winning coach and the most successful NSW mentor in State of Origin history. However, Griffin took umbrage at the ‘old school’ remark.

Griffin fell out with former captain Matt Moylan and took responsibility for his part after the “relationship deteriorated”. He said the stress of dealing with that conflict also took a toll on his relationship with Gould. However, he hit back at suggestions he had lost the dressingroom, stating “that is not the case.”

“They are a really good chance of winning the comp,” Griffin said.

Griffin said the relationship with Gould was “good at the start”, but said it broke down because they had different philosophies about how the team should be prepared. He believed the rebuild that he was tasked with overseeing had happened quicker than he expected.

"I thought we were ahead of schedule," he said.

"Whether that was jealousy [from Gould], that's something only he can answer …

"I'm not involed in board meetings but I can tell you he runs the club. It's his club."