A sleepless night and shaking at the news of his NRL debut, but Canberra Raiders prop Emre Guler wouldn't have it any other way.

It will mean more to the 20-year-old than just taking on the ladder-leading Sydney Roosters at Canberra Stadium on Sunday.

He's also relishing the chance to represent his Turkish heritage. 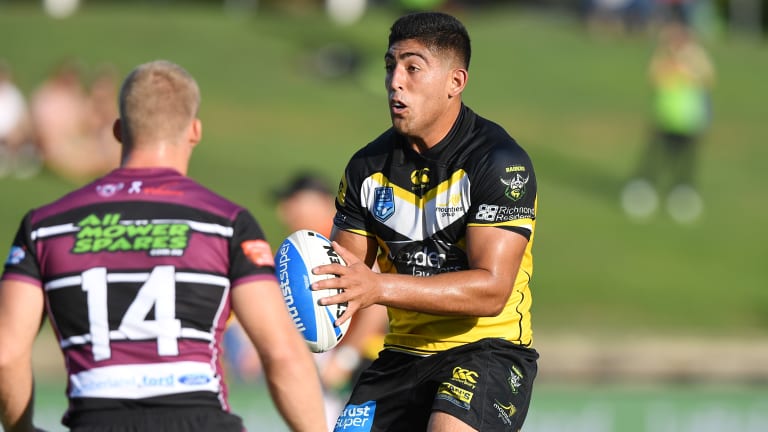 Emre Guler is excited to represent his Turkish heritage in his NRL debut.

Guler will become the 353rd Raider, a month after fellow forward Jack Murchie played his first NRL game against Cronulla, after being a regular in the 21 over the last month he was named on the bench on Tuesday.

He played most of his juniors for South Sydney before moving to Canberra a couple of years ago, with both Aidan Sezer and Nick Cotric helping make him feel at home.

A junior representative for both NSW and Australia, Guler was trilled to make his senior debut.

"I was really excited. When [Raiders coach Ricky Stuart] told me I was shaking all yesterday, I couldn't really sleep properly, I was just really excited," he told Fairfax Media on Wednesday.

With both Shannon Boyd (Gold Coast) and Junior Paulo (Parramatta) leaving at the end of the season, he also saw it as an opportunity to stake a claim for the 2019 season.

"Yeah hopefully. They're the boys that have helped me a lot this year, just around training and the way they prepare," Guler said.

"They've brought a lot to me and when they leave hopefully I can continue on with what they're doing here, and keep going and hopefully be as good as them."

As far as debuts go, it doesn't get much tougher than taking on the Roosters.

They've stormed to the top of the NRL ladder off the back of five straight wins.

While they will be without one of their enforcers – Jared Waerea-Hargreaves will be out for four weeks due to broken ribs – they bring back another into the starting line up in Dylan Napa.

But the prospect of taking on one of the best packs in the NRL only made Guler more excited, licking his lips at the chance.

"They've got a big pack and play really aggressively through the middle so hopefully when I come on I can be that point of difference and just mix it up a bit," he said.

"I just want to do my best for the boys.

"I'd say it's more exciting [than daunting]. It's a good challenge for me and I like challenges. I feel like the big games is where I want to play.

"This will be a good first step to get used to those big games."

Both of Guler's parents are Turkish and he's been back to his ancestral home about five times to visit his extended family.

They own a Turkish restaurant in Bankstown called Watsup Brothers, which has become extremely popular with Guler's teammates.

The team bus stopped there on the way home from their win over Wests Tigers at Campbelltown earlier in the season, filling up with food before heading up the Hume.

Guler's heritage is something he's extremely proud of. There's just something about how tough his relatives in Osmaniye are that inspires him.

"I'm going to be the first full Turkish NRL player … for me that's a big thing because I love my culture," he said.

"I just wanted people to know that. I was born here, but both my parents are Turkish.

"The area [of Sydney] I grew up in there's a lot of Turkish people and because I've been over there – it's just my family that live in Australia, all my cousins live overseas – so when I go back there I see the way they live and what they've got to do.

"It just makes me really proud of how tough they are, they're great people as well. I'm just really proud."