Home » Sport » 'He's a billionaire but you wouldn't know it': Politis marks 25 years as Roosters chairman

Uncle Nick. The Godfather. Al Pacino’s stunt double … Call Nick Politis whatever you want, but whatever you do don’t question his loyalty to his beloved Roosters. He’s been a sponsor since the 1970s but this year celebrates 25 years as chairman. He’ll be recognised at an intimate function on Monday night. We spoke to some of the people who know the power and passion of Uncle Nick. 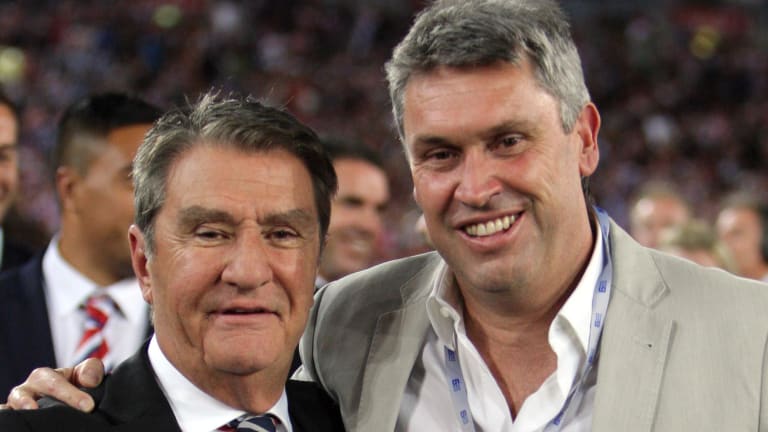 All smiles: Nick Politis and David Gyngell after the 2013 Grand Final.

There’s a lot of stories about Nick but the most interesting is the story of Nick. In 1993, he became Roosters chairman when we were on the bones of our arse. We were about to hit the wall financially. He put a new board together and now we’ve got tens of millions of dollars of assets. We were going broke and he brought in a new agenda and culture.

He said, “If you’re on this board, you must love this club.” His biggest asset isn’t his money, it’s the time he gives you. His loyalty is to the club first, people second. Nick doesn’t think he owns the club. The members own the club. No directors take fees. They get nothing for free. He’s one of the richest men in Australia and works like he’s the football manager.

It’s easy for people to think we get players because Nick pays. It’s because of the personal time he puts into people. He does it for the love of the Roosters. And he loves the Roosters. Sit next to him at a game and you will hear him say it every tackle: “Get ’em back!” In Nick’s eyes, the opposition is always offside.

We knew about the war before it started. There were draft documents and Nick could understand them before anyone else. His club was bleeding and he knew it would benefit immensely if it joined News Ltd's Super League. News needed 10 teams. They only had eight. We can’t get Manly. We’ve lost Newcastle. We better go for the Roosters. News had already told clubs they were going to get millions of dollars and the ARL could never match what they were going to get. 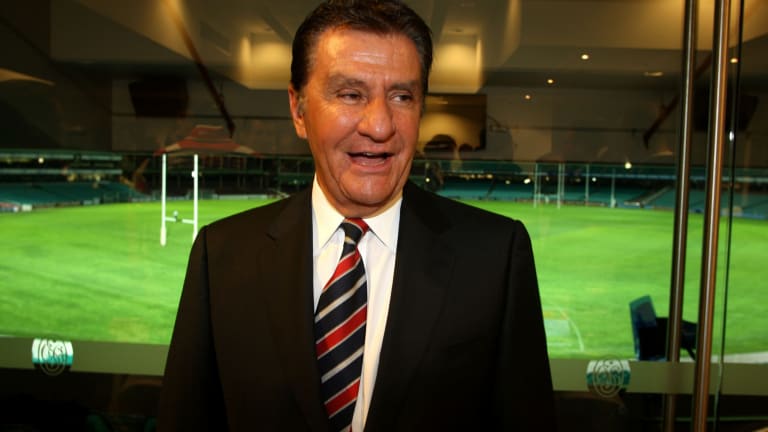 Loyalty: Politis ensured the Roosters would not defect to Super League.

Nick, being the businessman that he was, knew that money would go a long way to restoring financial stability at his club. He was tempted on many occasions. The Roosters were offered $25 million at one stage.

It was very easy for others to jump but Nick’s loyalty to his club and the game and both their histories meant more. He knew what it meant to be a foundation club. Those true values meant more than the $25 million.

He’s a billionaire but you wouldn’t know it. He’s strong and hard and I’ve known him since the Super League War. I think his main priority in his life is the Roosters. It’s what makes him get up in the morning. He’s completely enveloped in them. They’re in his DNA and he’s in theirs. You can’t imagine the club without him. When they lose, he doesn’t hurt — he grieves. You judge people by the number of old friends they have, not new ones. This bloke’s got an army of old friends.

We’d been beaten on the bell a few times in a row. I was sitting in the grandstand at Brookvale. We led 19-4 at halftime. Manly were going for 16 straight. They got back to 19-16 and the penalties were just flowing Manly’s way. The ref sent Luke Ricketson to the sin-bin.

James Packer came and sat next to me and said, “You’re going to be the bridesmaid again. The ref’s giving it to you.” I said, “We’ll see about that.” I went to the sideline and threatened to bring the team off. [Trainer] Ronnie Palmer said to [captain] Sean Garlick, “He wants you off”. 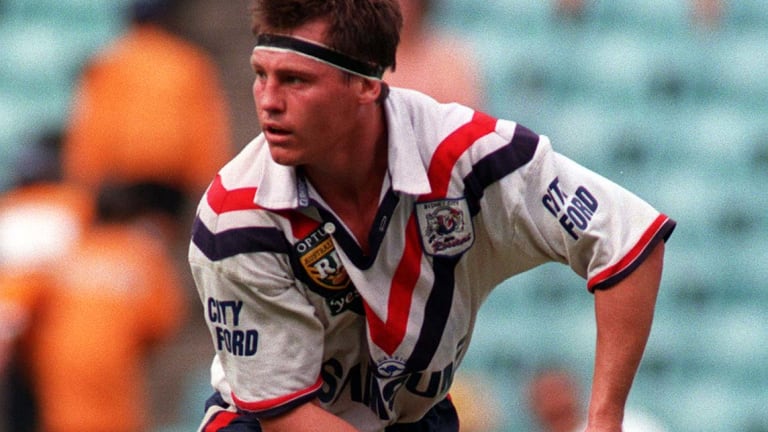 “He wants you off”: Sean Garlick playing for the Roosters.

Sean said, “Who me?” “No, the whole team. He’s sick of the referee.” Sean said, “We’re in front Ronnie!” Ronnie came back and I said, “Yeah, don’t worry about it.” But Nick was already on the phone to John Quayle saying, “We’re taking our team off the field! The ref’s a disgrace!”

We won the game and Nick came bouncing into the dressing-room hugging me. I hadn’t spoken to the journos yet. “Say whatever you want about the refs, baby!" he said. "I’ll pay all the fines!”

Nick was very good to me when I was getting started in the business world. I learnt a great deal from working with him and we shared some good times together.

Nick is a fiercely loyal and passionate individual, he invests in people and is always very generous. It’s these personal characteristics that have made Nick so successful in business and life and helped his beloved Roosters to achieve so much. 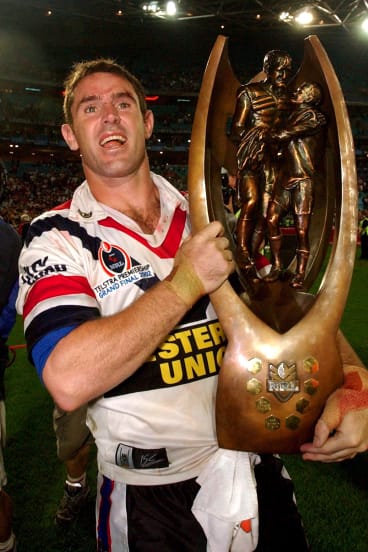 When we won the competition in 2002, I embraced Nick after the game and I could tell how much it meant to him. It wasn’t relief, just pride. He didn’t drive me mad with calls when I was coach but I knew if I hadn’t heard from him before 7am it meant he was in Greece. I still remember when we parted ways. We met at his regular coffee shop in Rushcutter’s Bay, where there’s a sign on a table that says “RESERVED FOR NICK”. We didn’t sit at that table that day, which probably wasn’t a good sign. He said, “It’s going to be best for us and for you if you move on”. It was a very easy conversation. Very calm. I said, “Mate, I totally agree with you. If I haven’t got your support, I don’t want to be here.” We are still close. When coaching gets tough, and I’ve had a lot of it, he’s the first on the phone to make sure I am OK.

He never hesitated to let me know how he thought the refereeing was going, even when he was at the ground and so was I. One night, when the Roosters were relying on the result of a game between Wests Tigers and Canberra in the last round to get into the finals, he called me seven times in the first half about the refs. Although we had our blues, we had a laugh as well. His passion for the game is unmatched.

I met Nick Politis for the one and only time in the airport in Sydney. He was at another carousel waiting for his bags and I saw him and stopped to say hello. 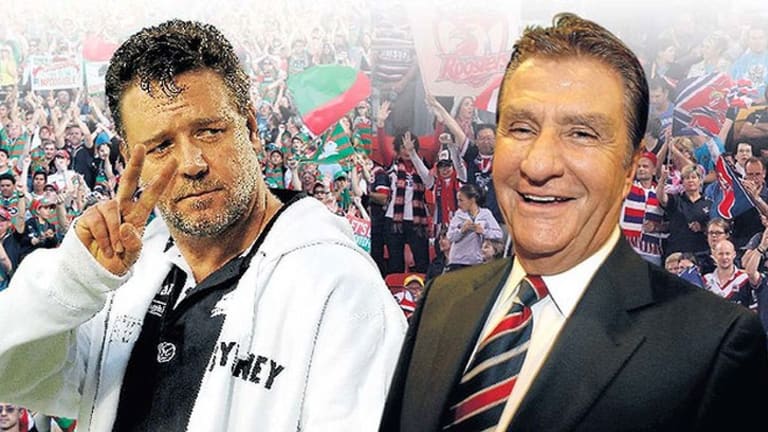 “He’s still our foe but you know what? I would cross a road to help him”: Russell Crowe on Roosters owner Nick Politis.

I think he said he’d been in Greece. He was charming. It only took a small amount of time in his company to understand why he has been so successful in his business life and at the Eastern Suburbs Club. He’s still our foe but you know what? I would cross a road to help him if he needed it and raise a glass in his honour. I respect his achievements and enjoy our healthy competition, and that’s what the game should be about.

He hated losing to Souths. The only time I saw him address the players before a match was in my first season, in 1996, against Souths. “I love this club,” he said. “It means so much to me — but I love beating South Sydney more. We don’t get beaten by South Sydney.” We weren’t beaten by Souths that night and weren’t for the next nine years. There was no way at any stage we would let them beat us, because we knew what it meant to him. 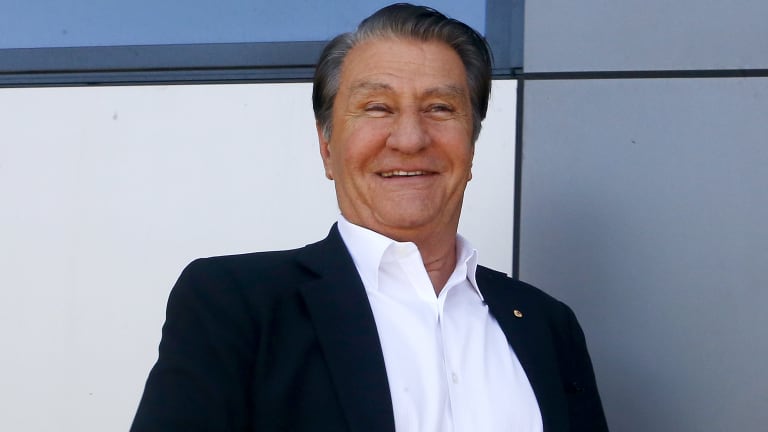 “We don’t get beaten by South Sydney”: Politis hates losing to his arch-rivals above all else.

I was in Nick’s office one day for a meeting. “Now, baby, one more thing before you go,” he said. “How long since you’ve had a colonoscopy?” I said, “I’ve never had one.” He picked up the phone and called the secretary for [leading bowel cancer specialist] Chris Vickers at St Vincent’s. He didn’t even have to introduce himself to the person on the other line. “Stella, please book Steve Gillis in for a colonoscopy.” Then he hung up. “You’re going in for a colonoscopy on Monday week at 9am,” he said to me. “Baby, you must do this. People die.” The sandwich at the end of the procedure was outstanding.

Nick once said to me, “Baby, the way you live your life you definitely need a colonoscopy.”

The only time I’ve seen Nick really angry is when he couldn’t find Chris Anderson to sack him because Chris was on the golf course. Wayne Bennett famously agreed to coach us in our 100th year and then it got out and there was a story in the Courier-Mail. 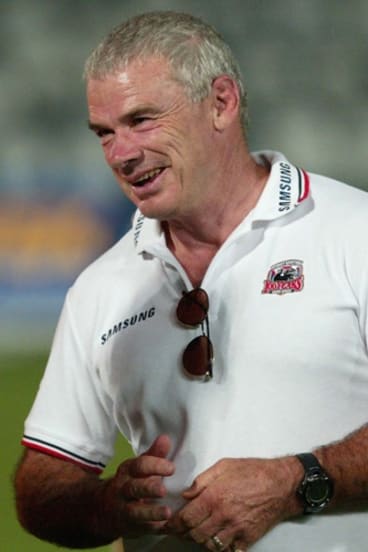 So Bennett backflipped. Nick hasn’t spoken to him since. We were into the pre-season and Anderson was hastily appointed and it was a disaster. Remember how he didn’t want second markers? We were belted 52-0 in the first match of the year against Souths. It went from bad to worse.

When we’d lose, Chris would give the players four days off and play golf. The last straw was when we lost at Brookvale but Nick couldn’t sack him the next day because he was playing golf! Freddy took over and had a lot of early success but, the following year, the wheels started to fall off.

Freddy moved Braith [Anasta, the captain] to fullback for a match at Penrith. It was a night game and it was pouring rain. Nick was in Greece so I had to commentate it to him over the phone from the grandstand. Kick off … They’re bombing Braith again … They’re bombing Braith again … Nick was on the other line saying, “Oh shit! Oh shit! What’s he doing? What’s he doing?”

I remember meeting Nick and David Gyngell when I was 16 years old, just before I signed with the Roosters. I was in awe in his presence then and he took me under his wing straight away. He always backed me. 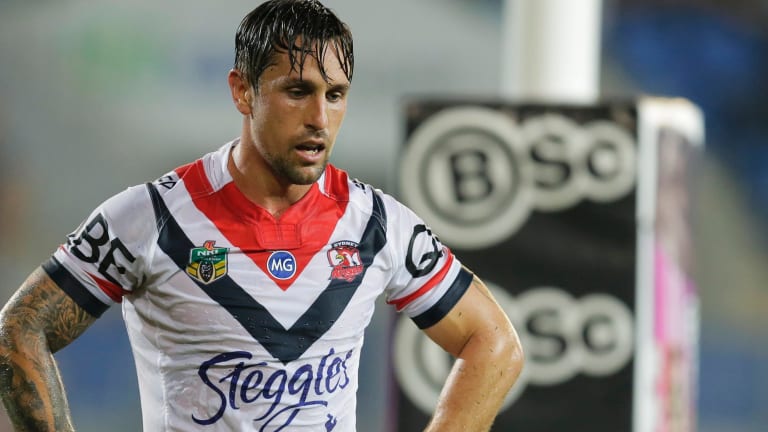 Even now that I've left, we're good as gold. I've spoken to him on the phone a few times since signing with Newcastle. What do I remember most? When we won the comp in 2013, he promised to take the boys to LA and Vegas. And he did. He came to LA with us and the boys have loved him ever since. Enough said.

Blake Ferguson was on the outer after being sacked by Canberra. I took him to meet Nick and told him Blake’s a good kid with a heart of gold but someone who’s had a tough upbringing. Nick made a commitment to help this kid, even if he didn’t end up playing for them. He was going to at least give him a job at the club. Nobody was happier than Nick when he ended up playing for his state and country.

When I first met Nick, he said: “I know there’s some talent in you — but I just want you to be a better person than player.” That’s what he’s tried to do. To make me a better person and I’d like to think that I am. Footy is the thing I do best. It is when I am my happiest. He gave me a second chance when nobody else would. What more can you ask from someone?