When the Sydney Kings take on the LA Clippers on October 1, Kings assistant coach Lanard Copeland will be reminded of a major turning point in his life.

The injury-hit Clippers had Copeland playing some back-up minutes in place of Bo Kimble and he took off for what he still believes is the biggest dunk of his career over a helpless Johnson.

“I went up one hand and he was just waiting in the lane,” Copeland recalled.

“He had no idea who I was and that I could jump so I just threw it down, it felt like the hardest dunk I’ve ever had, maybe that is just because it was the NBA and the atmosphere that night.”

His Clippers teammates went crazy and trash-talked Johnson about how an unknown guy had just posterised him but Copeland paid a price for the play.

“That was my last play in the NBA – a massive dunk on Larry Johnson,” Copeland said.

“I came down on my knee, banged my knee a little bit. Afterwards the Clippers promised to put me on injury reserve but they had seven or eight guys on there and they heard the NBA was cracking down on how many guys they had so the next day they released me.” 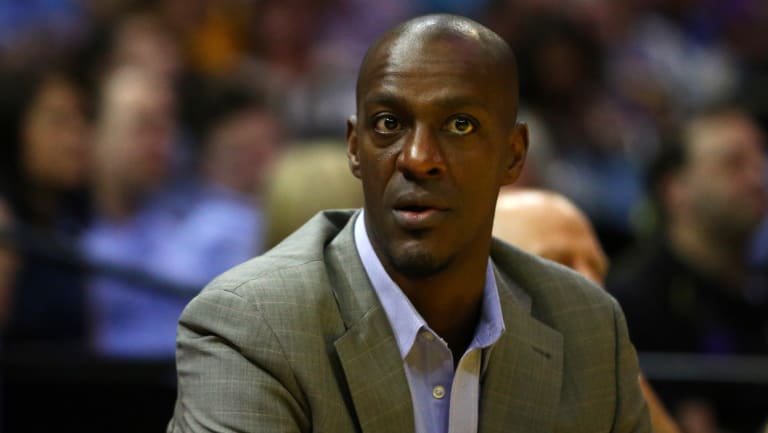 This is where Copeland’s life changed forever as he got his knee right and then took a three-month job playing in the Philippines where he met then Kings star import Dwayne McClain, who was heading to Australia for the NBL season.

Copeland had offers from Germany and other places and he didn’t know much about Australia except about Andrew Gaze, kangaroos and lots of outback.

“I knew Andrew Gaze played here, I didn’t know him but I thought if the talent is like that then I wouldn’t mind going there,” Copeland said.

So he took up an offer to play alongside Gaze at the Melbourne Tigers and began what would become a 13-year, two-championship stay with the Tigers and 17 years and 532 NBL games before his retirement in 2008.

Copeland has now been in Australia for 27 years and is an Australian citizen with four daughters and friends around the country, his bond with Gaze is so tight he came along as an assistant coach when Gaze took the coaching job at the Kings.

“I have four kids here as well, I probably wouldn’t have my daughters either,” Copeland said.

“Things work out the way they are meant to work out, of course the NBA was fun and I would have loved to stay but if that had worked out I wouldn’t have ever come to Australia and I’ve been here 27 years now.”

If such a dunk happened today Copeland would be all over social media but at the time he never got a video of the dunk.

So when the Kings arrive in Hawaii, where they will play the Clippers, Copeland will seek out the Clippers' technical staff to see how far back their archives go.

Clipppers staff are looking for video from the game after Fairfax Media contacted the club.

“I can’t wait until we get to Hawaii as I want to meet their media guy and find that tape,” Copeland exclaimed. “I haven’t seen that tape yet.”

Back in 1991, the Clippers were led by Danny Manning, Gary Grant and Ron Harper, the latter would play alongside Michael Jordan and Luc Longley in three championships with the Chicago Bulls.

In 2011, Harper came to Australia with Horace Grant and some other NBA greats for a Basketball Without Borders camp at Dandenong.

“Ron saw me and the first thing he said was “man this guy could jump” and he started telling Horace Grant about the dunk on Larry Johnson,” Copeland said with a laugh.

In all, Copeland had part of a season with the Philadelphia 76ers and those few months with the Clippers in 1991 and while he wonders “what if” about his NBA career, he says he wouldn’t change a thing.

“Every time I see an NBA game I think "what if?",” Copeland said.

“There is a pension now for players who played three years so I think what if I would have played one more year, maybe I would have stuck with someone.

“But Australia is my home, I’m an Australian citizen. As much as you want to stay in the NBA I’m glad it happened this way.”

ESPN and NBA League Pass will show the NBL v NBA pre-season games starting with Philadelphia 76ers against Melbourne United on September 29 at 10am.