Ten months have passed since Reece Hodge smacked the All Blacks in Brisbane – and the pain is still raw.

With two minutes remaining in the test in Brisbane last October, Wallabies wing Hodge hoofed a 53-metre penalty off a soggy Suncorp Stadium pitch to give his side a crucial buffer and earn a shock 23-18 win over the All Blacks. 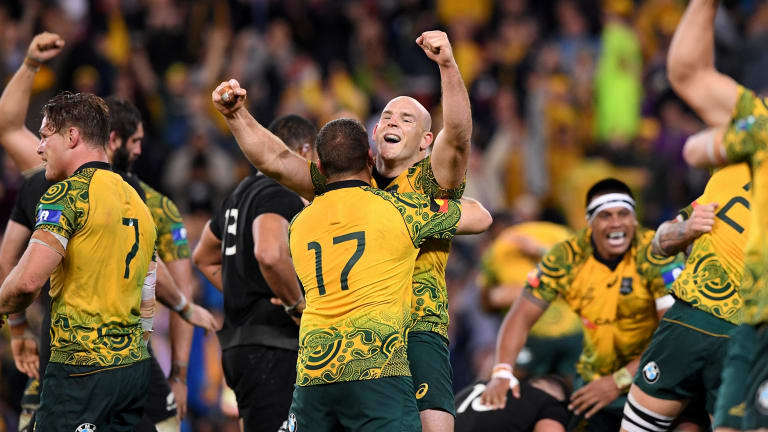 Long time coming: Wallabies players celebrate after the final whistle in the third Bledisloe Test in 2017.

"I try to move on, but it is still there," assistant coach Ian Foster said in reference to the painful memory of the All Blacks' most recent defeat.

"It hurt because, largely, from our side of the coin it was a really poor test and we didn't have that edge we needed to have and they did."

Afterwards the All Blacks looked in the mirror and pointed some fingers, apportioning much of the blame at the faces staring back.

Despite the game being a dead rubber, with the Bledisloe Cup already in NZ Rugby's possession, the Wallabies expressed their relief at breaking a 26-month drought against the Kiwis by morphing into group hugs accompanied by loud hollering. All the All Blacks could do was suck it up.

"And we saw that after the game, how much it meant to them," Foster added. "Which doesn't really surprise us, but it still hurts." 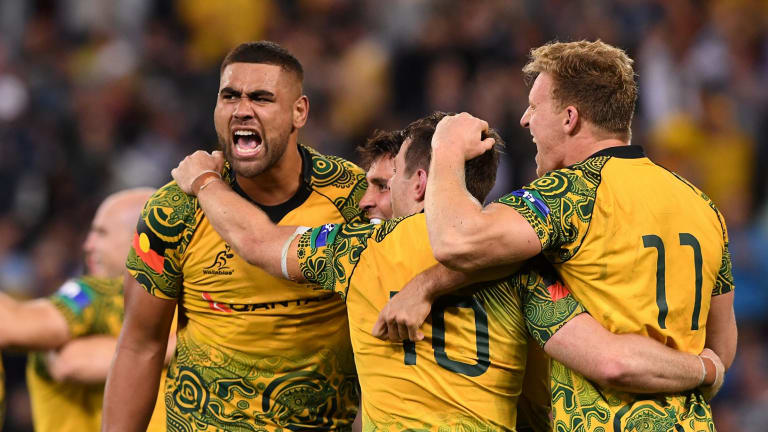 The All Blacks had won the Bledisloe, but were left with a hollow feeling having to watch the Wallabies celebrate after game three.

It's quite possible the All Blacks players will be reminded of that post-match reaction as they prepare for Bledisloe I in Sydney next weekend.

The All Blacks have gathered in Christchurch to prepare for the "Game of Three Halves", which will comprise a hit-out against Canterbury and Otago at AMI Stadium on Friday night.

It is still undecided which Crusaders, if any, will participate after only joining the team on Thursday following their Super Rugby title celebrations.

"There will be some things we will put out there, with an eye to Sydney," Foster added. "Just to see what they look like, and I guess there are a couple of combinations we will try but I would rather not document that at the moment."

Given what took place in Brisbane, the All Blacks won't be lackadaisical with their preparations prior to flying to Sydney on Sunday afternoon.

Although the Crusaders will still be on a high after defending their title, and possibly feeling a little worse for wear after the celebrations, Foster expected a professional attitude when they returned to test duty.

Earlier this week All Blacks head coach Steve Hansen said dropping the Western Force from Super Rugby had forced more competition for places among the surviving four Aussie teams, emphasising that would be a positive for Wallabies coach Michael Cheika.

Six Nations champions Ireland beat the Wallabies 2-1 in the June test series in Australia, with Foster impressed by both countries' ferocity in all areas. The Wallabies were bitterly disappointed to let the series slip after winning first test 18-9 in Brisbane.

"It was a game that Ireland probably tried to take them a lot through close-quarters stuff. And really tried to hammer away. Australia were probably willing to play with a bit more width and, really, when you look at the series it could have gone either way."

However Foster was cautious about taking too much out of Ireland's series win, given their confrontational style with the ball and their preference to be conservative with their attacking methods.

"You have to be a little bit careful with that, because Australia defended a little bit different knowing they were playing Ireland and perhaps how they will defend against us."