Home » Sport » I raised my daughter as a Demon. Then the Magpie army got to work

This story starts in utero, with the hatching of a sneaky plan to help secure the football allegiance of my unborn child. It has included cameos from the likes of Eddie McGuire and Nathan Buckley, as well as a young and not-so-hairy ruckman named Max Gawn. Ever so grimly, it continues. 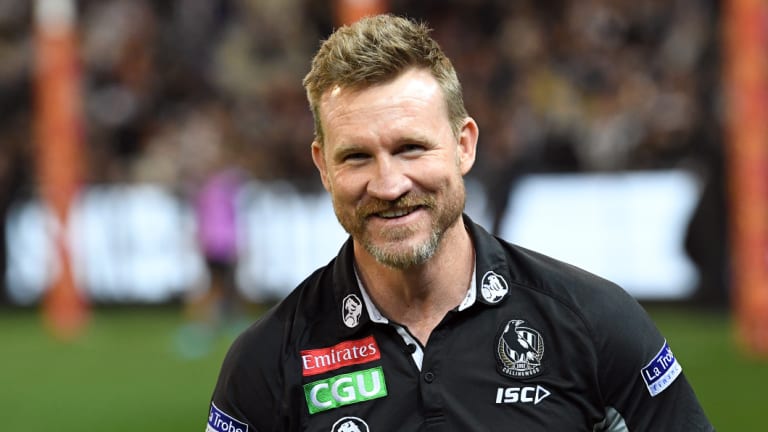 My own father was a boot-studder/statistician for Melbourne in their '50s glory days, and a board member after the failed '90s merger with Hawthorn. This was a family of Demons – on my side, anyway – where choice was not an option. And if Robbie Flower was our modern-day king, it has not been a rich inheritance.

No flag since 1964. No finals, until now, for 12 years. Still, suffering is a dish best shared. So I campaigned and schemed. Cut a deal. I would be giving birth to a Melbourne supporter. And, happily, in 2004, I did.

Olivia could sing It’s a Grand Old Flag from her car seat on the way to kindergarten, was signed up as a junior member, had the mini navy-and-red footy, the jumper, the innocent enthusiasm. Optimism, even.

(Dees fans may wish to look away now, for the following words may disturb some readers.)

Then her father started working for Collingwood.

When president McGuire made his call to welcome us all to the Magpie “family”, and asked to be put on speakerphone for a rendition of Good Old Collingwood Forever, he was not only rebuffed but warned that the child was off-limits.

Eddie’s response: just wait until she runs out with the team in front of 90,000 and let’s see who she barracks for after that. Oh dear.

Yet the defection came gradually. Within my earshot, for a while, she was still a Demon. When not, the sad truth was increasingly black-and-white. After time spent at work with her father, there would be thrilling tales of chatting with Bucks. Seeing Pendles. Swannie. Forcing her to wear her Melbourne jumper to the school footy-colours day was reported by a gleeful Pies neighbour as a head-bowed walk of shame.

But even before that came the 2012 Queen’s Birthday game. The Pies were circling. Family friend Tim Harrington, then the Melbourne list manager, organised a counter-attack, involving a pre-game VIP trip to the coaches’ box and into the rooms, where a very tall chap with a dodgy knee kindly agreed to pose for a photo with an excited seven-year-old. Back then, admittedly, there wasn’t much else for Big Max to do.

On hearing all of this on the walk back to Pies HQ that night, Buckley asked what counter-measures could be implemented. But, sadly, not many more were needed. And so it is that my precious only child will be at the 'G on preliminary final night as a loud and proud Magpie.

Linda Pearce is an Age contributor.