Home » Sport » 'I was lost': Caroline Buchanan opens up as Olympic journey begins

Caroline Buchanan admits she felt lost in the six months she spent off her bike while she waited for her cracked sternum to stop rattling around in her chest.

But the eight-time world champion is back on her bike and back to her winning ways, convincing her she's ready to set her sights on the Tokyo Olympic Games in 2020 and the world championships. 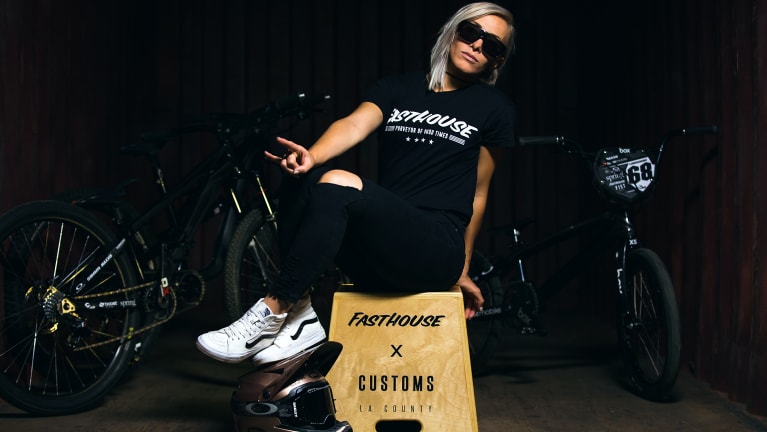 Canberra BMX queen Caroline Buchanan is back to her winning ways and looking to return to the summit.

Buchanan sent a message to her rivals when she won two titles at Crankworx, a mountain-bike event in Whistler, a week ago, claiming the women's pumptrack and the jump jam events.

She went into the competition with "pretty low expectations" and just wanted to get past the first round. It was a different approach for Buchanan, who has never been one to make up the numbers.

But she loved the Crankworx buzz as the Whistler crowd got behind her comeback from the horrific crash last Christmas, which left her with a busted sternum, collapsed lungs and a broken nose.

"It reminded me what I love about competing and racing, and overcoming those nerves and channelling them," Buchanan told Fairfax Media.

"To kind of get back into that flow of competition and now I've got a little bit of a break, and a couple more events coming up in November."

Buchanan will take some time off, but has one BMX event in her sights in the USA before returning to Australia for the annual Spring Cycle ride across the Sydney Harbour Bridge.

Rather than turn her immediate focus back to winning events, she still has some muscles to build.

The 27-year-old said even though she's back on the world stage, she doesn't feel like she's back to the fitness level she enjoyed before her accident.

There's still plenty of work to do in the gym before she's back winning world titles.

"My biggest goal is getting back to 100 per cent strength. Even though I've come back to the world stage and being at Crankworx and won an event already I'm definitely, strength wise, I'm not where I need to be," she said.

"For me it's still putting in the time after six months off, playing a little bit of catch up to bring back that strength and conditioning.

"That's more of a focus as well as just that personal progression on two wheels rather than titles and doing events."

But don't think that means she won't look to climb back to the world summit. That's definitely on the agenda.

You don't win eight titles on either a mountain bike or a BMX without wanting more.

Olympic qualifying begins at the end of the year and Buchanan plans to be part of the Australian team that descends on the Tokyo in 2020.

Having been to two Olympics without winning a medal, there's a big box to tick if she gets to Japan.

"Over the past seven years of winning eight world titles, its almost been every single year that I've either won a world title or missed a year and doubled up the next year with BMX and mountain bike," Buchanan said.

"This year it's definitely a quiet year, so already planning ahead to next year with BMX and mountain biking.

"Olympic qualifying starts towards the end of November and that's roughly the two-year out mark.

"The focus then shifts a little more to the preparation, but for BMX racing we've got more spots for the Tokyo Olympics for females available than we did for the London and Rio events.

"That's a big positive and takes a little bit of pressure off myself."