Inglis sought the green light from his surgeon late on Monday to feature for the Rabbitohs in their clash against Canberra in the nation's capital on Sunday, hoping to rejuvenate South Sydney's stalled title charge. 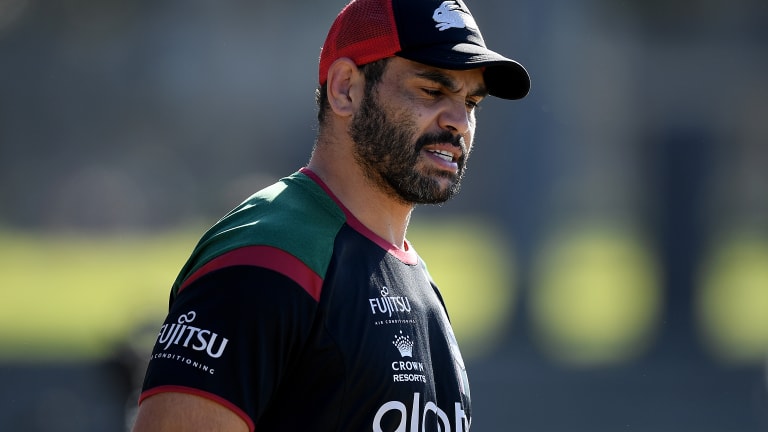 Ready to roll: Greg Inglis is hoping to get the green light to return from a broken thumb.

The Queensland captain was preparing to make his comeback in the Rabbitohs' heavy loss to the Broncos last week, but was held back under orders from his surgeon.

Inglis' imminent return is a welcome boost for the Rabbitohs, whose backline cupboard has been threadbare in recent weeks after injuries to Alex Johnston (hamstring), Robert Jennings (hamstring), Campbell Graham (wrist) and Adam Doueihi (knee). Johnston and Graham are also closing in on returns to the field.

On Inglis, stand-in captain Sam Burgess said: "He brings experience at every level of the game including Origin and finals. He's done it all. He's a big game player and we'll welcome him back to the side as soon as he gets here."

The Rabbitohs can still challenge for the JJ Giltinan Shield, but have lost their minor premiership buffer with consecutive losses against the Roosters and Broncos.

They sit third on the ladder on the same amount of points as the table-topping Storm and Roosters, but with an inferior points differential.

"The competition is tight right through top to bottom and you can see the results that are coming in each week," Burgess said. "Every team in the top eight is good enough to win the competition and it's just about getting it right at the right time.

"There's a lot of factors in everything. We've reviewed [the Broncos loss] and it's gone. We've dumped it. It's the same when we win well, we move on pretty quickly. It won't change with a loss. We've had some good honest discussions. We're feeling good and looking forward to the week in front of us."