Canberra are staring at a 10th-place finish for the third time in Ricky Stuart's tenure at the NRL club and the coach believes injuries have been a major factor.

The Raiders could add to their ladder results from the 2015 and 2017 seasons, bundled in with a memorable run to the 2016 preliminary final. 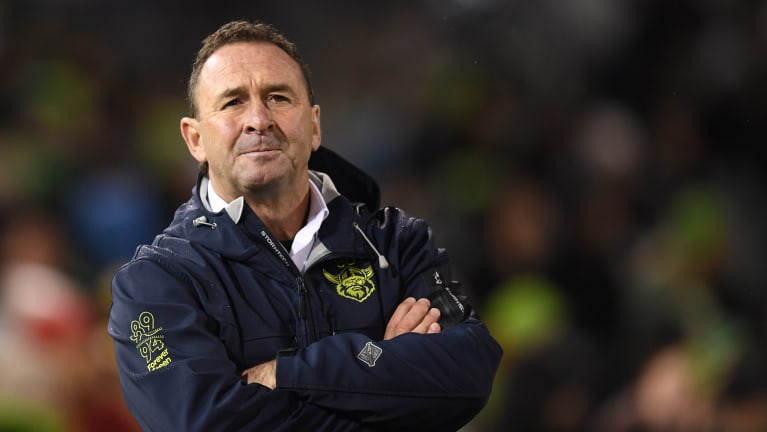 Their 22-20 defeat to Wests Tigers on Sunday extended their record to 4-15 in games decided by six points or less.

Stuart's team sits three games behind the ninth-placed Tigers, who are still a chance to secure a finals berth for the first time in seven years.

The premiership-winning coach with Sydney Roosters in 2002, Stuart says injuries have played a big role in his team's fortunes.

Being without hooker Josh Hodgson (ACL) for more than the first half of the season, along with captain Jarrod Croker (knee) and fullback Jack Wighton (suspension), robbed the Raiders of crucial talent.

"Josh is as important to us as Cameron Smith is to Melbourne and we've had 14 weeks of putting up with that (Hodgson missing) and we did a wonderful job to hang in," Stuart said.

"Losing our fullback, which is no fault of anybody but ours and Jack's, is crucial and again, that's your Billy Slater to your Melbourne. That's why they're hanging around the top four and we're hanging around 10th.

"They've been two massive, massive blows to us.

The Raiders are leading the competition for points with 509, ahead of premiership contenders South Sydney (501) and Melbourne (490).

If Canberra keeps their attacking record ahead of those teams they will become the first team to top the point-scoring list and still miss the finals.

Since a final-four system was permanently introduced for the 1926 season – previously there were years with only a final or no playoffs at all – every team with the best attacking record has made the finals.