Home » Sport » Is Leichhardt really that much of an edge for the Tigers?

Last round, Leichhardt Oval, Sunday afternoon, sun shining, barely a blade of grass free on the hill. Beat the Raiders and the Wests Tigers were playing finals. Lose and they were playing Mad Monday pranks the next day. 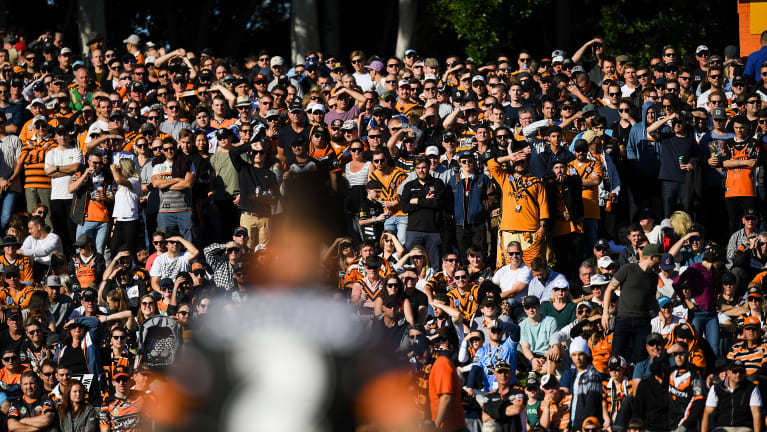 By half-time, they were down 30-4. By full-time, they had lost 52-10. An hour after full-time, Robbie Farah was sinking cans on the scoreboard and it was the beginning of the end for Jason Taylor.

"We just got spanked," Halatau shrugs.

Which begs the question: magical, mythical . . . or just a myth?

You can call Leichhardt Oval many things – Tigertown, eighth wonder of the world, postcard perfect, Junior's joint – but don't call it a fortress if recent history is any guide.

Ask any Tigers administrator, coach, player or fan where they would like to play if their season hinged on just one game. Without surprise, the majority would give the nod to their suburban sanctuary.

But, as they again prepare to let it all ride against a bumbling Dragons in the inner west, the Tigers will will be up against a record that shows they've won just eight of their last 19 games at Leichhardt stretching back to 2014. Another loss and it will be another summer of "what ifs".

So, is it really that much of an advantage to play there any more?

"The guys that probably haven't played there as youngsters and came from different places to be at the club, it probably doesn't have the same effect, I would say," Halatau said.

"When I first started playing there, there were blokes like Ben Galea, Mark O'Neill, Robbie [Farah], Bronson Harrison, who spent time in the lower grades there. We had a strong sense of the club. Just when you don't have that attachment as a youngster, maybe it doesn't have the same effect.

"The wins far outweighed the losses in those early days at Leichhardt. You always thought it was an advantage and you looked forward to playing there."

Given commercial considerations, the Tigers will play just three games at Leichhardt this year. It's one of five home grounds they've used this year. As much as their Leichhardt record surprises, they've won even less at Campbelltown since 2014 and have lost their last seven games there.

Coach Ivan Cleary told Fairfax Media earlier this year he would prefer to have more games at just one venue. They will keep playing at Leichhardt and Campbelltown next year – probably three games each again – but might also use the new Western Sydney Stadium at Parramatta.

The Dragons have gone the opposite way, taking more games back to Kogarah and Wollongong this year. They have the best home record in the competition.

The Tigers' last match at Leichhardt was one pegged as only slightly less important than this Dragons clash: Robbie Farah's 250th NRL game for the club and return to his spiritual home. They turned in one of their worst performances of the year against the Titans.

"It used to be a fortress, but unfortunately we don't play there as much any more," Tigers legend Steve Roach said. "That's probably the reason.

"Robbie Farah and Benji Marshall know what it means to play at Leichhardt Oval. If they can harness that belief and power that comes from that oval, they should play well. You've got to feel the energy of the crowd, and if they can't get up for this game, then they shouldn't be playing."

At last count on Friday night, there were only a handful of tickets left for the Dragons' first visit to Leichhardt since Nathan Blacklock backflipped so many times at the end of a 2001 fixture he almost finished on Mary Street. It's expected to be a sell-out.

In another era, at another time, the Dragons might have been fretting about going there.

"It's a great suburban ground," St George Illawarra coach Paul McGregor said. "Whether you're the home team or the away team, it's a great ground to play at. The crowd is on top of you. It's one of those grounds you look forward to playing at."

Added Cleary: "It will be nice to have the crowd behind us. We haven't had that for a while. We've played away. The ground, the crowd . . . they're not going to get us home. But I'm sure it will help."

"But it's all set up for them, and it's just whether or not the result follows," Halatau said.