Two other right-handed pitchers, Roy Halladay and Mike Mussina, also were elected, Halladay on his first try and Mussina on his sixth. Edgar Martinez, the longtime Seattle Mariners designated hitter, gained entry in his 10th and final year on the ballot. Halladay, a former ace of the Toronto Blue Jays and the Philadelphia Phillies, died in a plane crash in 2017.

Rivera was named on all 425 of the ballots cast by members of the Baseball Writers’ Association of America, eclipsing the previous record percentage, 99.3, by Ken Griffey Jr. in 2016. Halladay received 85.4 percent of the votes, Martinez 85.4 percent and Mussina — a stalwart for the Baltimore Orioles and the Yankees — 76.7 percent. Candidates need 75 percent for election.

The players will be inducted to the Hall of Fame on July 21 in Cooperstown, N.Y., along with designated hitter Harold Baines and reliever Lee Smith, who were passed over by the writers but were elected by a smaller committee last month. 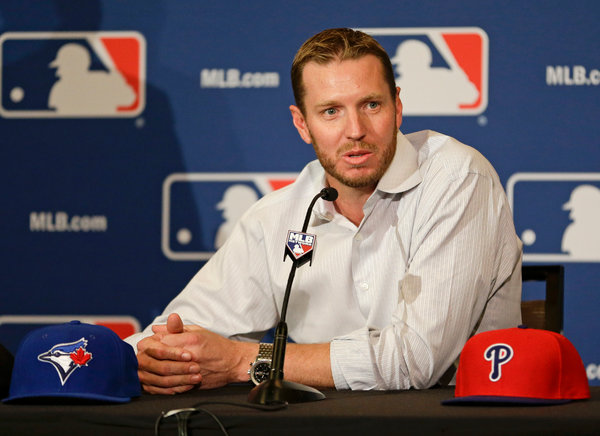 Barry Bonds and Roger Clemens, who dominated the game in careers that stretched from the mid-1980s through 2007, were again denied entry in what was the seventh appearance on the ballot for both players. Both have strong ties to performance-enhancing drugs, which baseball did not test for until 2003. Bonds got 59.1 percent of the vote, and Clemens 59.5 percent — their highest totals yet, but still shy of 75 percent.

Rivera, 49, signed with the Yankees from Panama in 1990, for a $3,500 bonus. He reached the majors in 1995 and started 10 games; the last batter he faced as a starter was Martinez, who singled home a run in the fifth inning against him on Sept. 5, 1995, knocking Rivera from the game and sending him to the bullpen forever.

It was a perfect fit. Rivera thrived as a setup man in the Yankees’ 1996 championship run and took over as the team’s closer in 1997, the year he discovered his devastating cut fastball, which broke hundreds of bats with its hard, late movement into the handle of left-handers’ bats. Rivera remained the closer through his retirement in 2013, compiling 652 saves with a 2.21 earned run average, the lowest in baseball history for anyone born after 1889 (and with a minimum of 1,000 major-league innings).

Rivera was even better across 96 postseason games, with an 0.70 E.R.A. and 42 saves — matching his uniform number. He was the last player to regularly wear No. 42, which is retired across Major League Baseball for Jackie Robinson.

Rivera was so prolific that M.L.B. named an award after him to recognize the American League reliever of the year. Likewise, Martinez is the namesake for the award recognizing the best designated hitter. Martinez, 56, made only 560 career starts in the field (mostly at third base) but nearly 1,400 appearances as the Mariners’ D.H.

Martinez won the A.L. batting title in 1992 and 1995, when he helped lead the Mariners to their first playoff berth, securing the team’s future in Seattle. For his career, he hit .312 with a .418 on-base percentage and a .515 slugging percentage; only two other right-handed hitters in the game’s history — Jimmie Foxx and Rogers Hornsby — were better in all three categories with at least 5,000 plate appearances.

Even so, it took a while for Martinez’s case to build momentum. The writers had never elected a player with as many games as Martinez as a D.H., a position created in 1973 to boost offense in the American League. In 2014, only 25.2 percent of the writers voted for Martinez. But that support has grown steadily, and Martinez became the fifth player elected in his final year of eligibility by the writers, joining Red Ruffing (1967), Ralph Kiner (1975), Jim Rice (2009) and Tim Raines (2017).

Halladay reached the majors in 1998 but tumbled to Class A in 2001 to rebuild his mechanics and confidence. He re-emerged as baseball’s most dominant starter from 2002 through 2011, averaging 17 victories a season and winning the Cy Young Award in both leagues.

He led the league in complete games nine times and finished with 67, a figure unlikely to be matched anytime soon. No active pitcher has more than 38 complete games, and no staff last season collected more than five. Halladay, who threw a perfect game and a playoff no-hitter for the Phillies in 2010, now seems like a relic in a craft that relies more and more on relief pitchers.

“It’s funny, nobody’s getting to 200 innings anymore, and to me 200 was like the minimum,” Halladay said in March 2017. “You watch the minor leagues and young players now, there’s such an emphasis on swing-and-miss and strikeouts, so there’s more pitches, there’s deeper counts. I felt like my best games were when I threw under 100 pitches and threw a complete game. To me, that was a better game.

“Sometimes I’d go out and throw seven or eight innings and be at 120 pitches, but if I was efficient I wanted to throw nine in under 100 pitches. But that was: ‘challenge ’em, pitch to contact,’ where now there’s so much put on, ‘with two strikes, you can’t let him hit it.’ For me, I felt like with two strikes — 0-2, 1-2 — if they didn’t swing at it, it was going to be strike three.”

Halladay, the son of a pilot, took up aviation after back and shoulder problems forced his retirement in 2013. He was only 40 when he crashed his small plane into shallow water near Holiday, Fla., on Nov. 7, 2017. He is the first player elected posthumously by the writers since Roberto Clemente, the Pittsburgh Pirates outfielder who died in a plane crash in 1972.

Power prequel cast: Who is in the cast of Power Book III Raising Kanan?

Why Do So Many People Hate Jimmy Fallon on 'The Tonight Show'?