Wests Tigers fans would have been gutted by the heavy loss to South Sydney, but even more devastated if they find out in the coming months that was coach Ivan Cleary's last game in charge.

With Robbie Farah and Benji Marshall both pushing on to 2019 at the joint venture, the big talking point will now turn to whether Cleary ignores Penrith's advances. 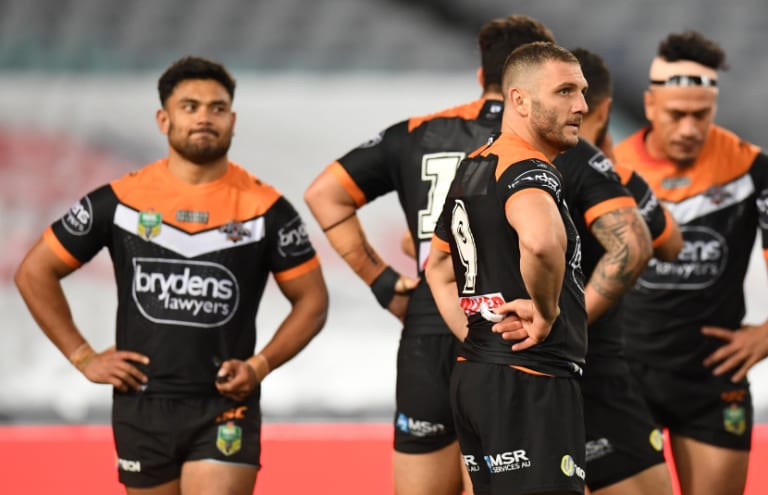 Toothless: Wests Tigers saved their worst for last as the Rabbitohs ran riot.

The Panthers are privately holding out hope Cleary returns to the foot of the mountains and have his son, Nathan Cleary, as their trump card.

Nathan will make a call on his own future in November.

Cleary said he intended to honour his contract, but when asked after the game if he could guarantee he would be at the Tigers next year, he could not say ''yes'' or ''no''.

"I have said what I said about that,'' Cleary said.

“I have a contract here. I have said all I need to say. I get that people want to discuss it.

“I get there is an agenda about various things outside the game but I think I have made my position clear.''

Cleary is respected by the players and they would be more shocked if he bailed early. They have a huge opinion of him. It explains why Penrith are so determined to get him back.

Under Cleary the Tigers have improved big time on last year, especially once Farah and Moses Mbye arrived before June 30.

As for the final game against Souths, it was not something Cleary nor any Tigers fans would have envisaged.

"They totally dominated the game after 20 minutes with possession. That second half we made 200 more tackles or something,'' Cleary said.

"To their credit, they were ruthless and played really well. They looked like a team on a mission.

"I thought we started with plenty of intent, but in the end you could see who was marching on and who wasn't [to September].''