Cristiano Ronaldo's first Champions League appearance for Juventus lasted only 29 minutes as the competition's record scorer was sent off as his side opened their Group H campaign with a 2-0 win at Valencia.

Penalties either side of halftime by Miralem Pjanic sealed the points for the visitors as Valencia's return to European competition after a two-year absence went flat. 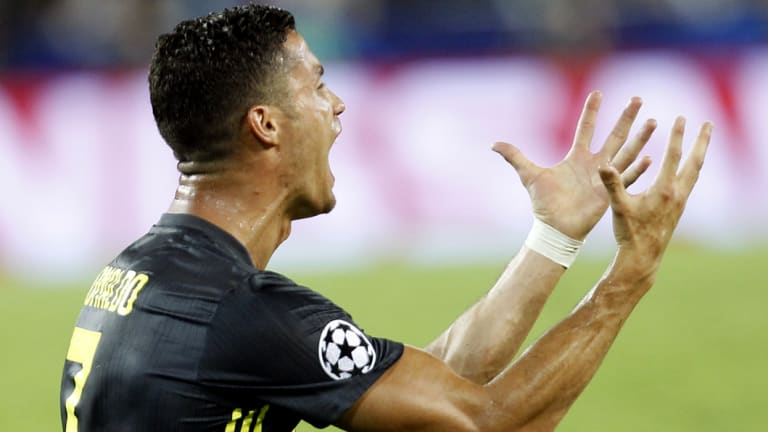 The night was overshadowed by Ronaldo's straight red card for a seemingly innocuous incident with a Valencia defender.

He appeared as stunned as the Mestalla crowd when German referee Felix Brych handed out his punishment – his first send off in 154 Champions League games.

A penalty miss by Daniel Parejo in stoppage time summed up Valencia's night.

The French star fired United ahead in the 35th minute with a goal of the highest quality, drilling a left-foot shot into the top corner from the edge of the penalty area after side-stepping his marker.

He made it 2-0 from the penalty spot on 44 minutes, harshly awarded by German referee Deniz Aytekin after Luke Shaw's cross struck Kevin Mbabu's arm as the defender tried to avoid contact.

A darting run by Pogba midway through the second half released Anthony Martial and the forward scored with a clinical finish.

Manchester City suffered a surprise 2-1 defeat at home to Lyon in Group F.

Lyon took the lead in the 26th minute through Maxwel Cornet, who drove home after Fabian Delph made a hash of clearing a cross.

With the suspended City manager Pep Guardiola forced to watch from the stands, Nabil Fekir then made it 2-0 in the 43rd minute with a sweetly struck drive after being set-up by Memphis Depay.

City earned themselves a lifeline through Bernardo Silva, who produced a smart finish after a superb jinking run from substitute Leroy Sane.

Florian Grillitsch and Haavard Nordtveit scored for the Bundesliga side but Ismaily and Maycon equalised to ensure a share of the spoils.

Real Madrid got their title defence off to a strong start by convincingly beating Roma 3-0 at home.

Isco broke the deadlock with a wonderfully struck free-kick just before the interval.

Gareth Bale doubled the lead on 58 minutes and a stoppage-time strike from returning striker Mariano Diaz rounded out the scoring at the Bernabeu.

Viktoria Plzen blew a two-goal lead to draw 2-2 at home with CSKA Moscow, who equalised deep into stoppage time with a converted penalty from Croatian striker Nikola Vlasic.

Bayern Munich midfielder Renato Sanches made a memorable return to former club Benfica, scoring once and helping set up the other goal in the Germans' 2-0 Group E win.

The 21-year-old Benfica youth product made the most of his rare start to set up Robert Lewandowski's 10th minute goal and find the net himself on 54 minutes.

Ajax dismantled AEK 3-0 to sit top of the group, courtesy of a brace from Nicolas Tagliafico either side of Donny van de Beek's goal for the hosts.