Home » Sport » Kelly leads Giants to give Carlton the blues

If Carlton fans didn't yet know the path the club was on before Sunday's 105-point drubbing at the hands of the GWS Giants, it would have been abundantly clear after the game.

Here were the Blues, a club that has endured a torrid run of wooden spoons and finals misses since the turn of the century, looking like the Giants did in their infancy, when they were created from nothing and entered the competition in 2012. 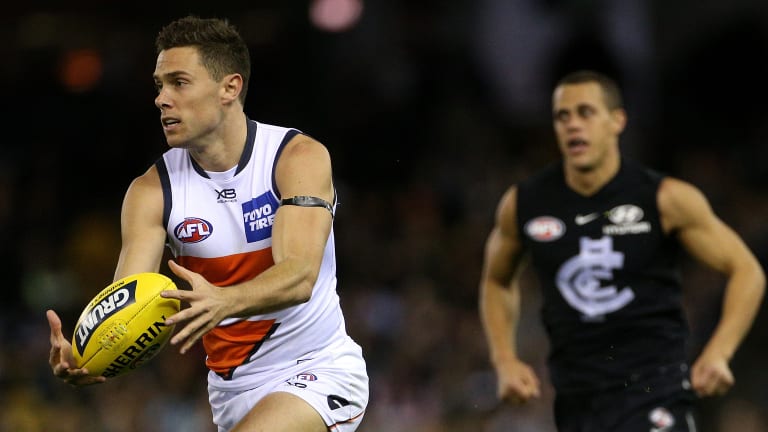 In that time the Giants have soared past the Blues when it comes to on-field output, and after clearing experienced players during last year's trade period, this year Carlton have continued an all-out rebuild that has delivered their fans many afternoons like this one: a heavy defeat intersected by flashes of the future.

There were moments of promise from young players like Harry McKay, Patrick Cripps and Cameron Polson, and there were other moments still when the entire team got stuck into the slicker Giants to blunt their formidable attacking power. But those moments were few and far between.

Injury was the one down note for the Giants, as Brett Deledio, Dawson Simpson, Sam Taylor and Toby Greene all ended the game on the bench. Because of this, GWS played parts of the final term with 17 on the field and when both Zac Langdon and Brent Daniels left the ground for rubdowns, even 16.

Deledio looked to have injured his left calf. He was three games back from a long calf injury layoff in 2018 and has had trouble with both in the past few seasons. Minutes later, Greene came from the field to have treatment and didn't return while ruckman Simpson limped from the field too. This meant the Giants were down to zero rotations while they held a lead of 66 points late in the third term.

Carlton's effort could not be faulted, except for the last quarter. They quite simply just don't have the players to match the Giants and they find themselves in this situation so they can flourish and play consistently successful footy in the future. 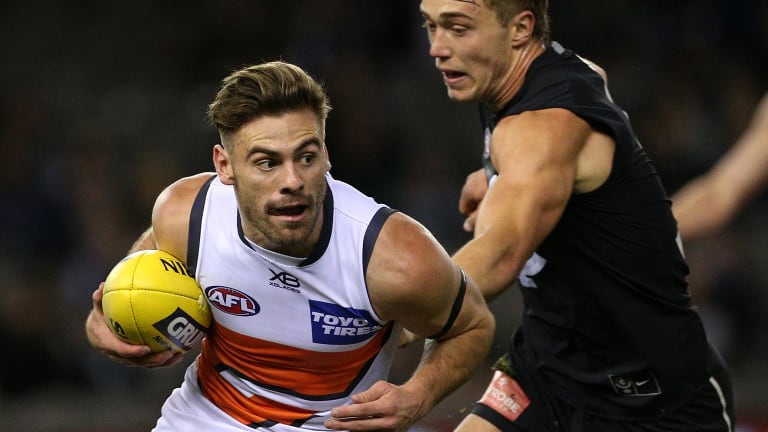 Stephen Coniglio was also among the Giants’ best.

The Giants, perhaps the most impressive side who haven't been in the top four conversation in recent times, were clinical in their demolition of the Blues.

In the middle Josh Kelly, Stephen Coniglio and Callan Ward were in a class of their own, as was Lachie Whitfield off the half-back line, while the rest of the team profited from their superiority.

Carlton went into damage limitation mode very quickly and that remained the theme for the afternoon. The Giants kicked the first three goals of the game and missed other guilt edged opportunity through Rory Lobb, Matt de Boer and Jeremy Cameron.

That kept Carlton's heads high enough, and they bobbed up further when Harry McKay took a strong pack grab, although he missed the set shot. He made amends with a crunching tackle later on, and then in a separate bit of play he gathered the ball 30 metres out and dribbled the Blues' first goal for the game even though he had teammates free ahead of him. That cut the margin to 15 points but it quickly blew out again when the Giants kicked three quick majors, two before quarter time and one just after it, the best a quick one-two give-and-go between Adam Kennedy and Coniglio, the latter finishing the move off with a smart snap.

Most intriguing were battles between Charlie Curnow and Taylor, Patrick Cripps and Ward (at stoppages) and a particularly dogged duel involving Dale Thomas and Greene. Thomas – who was so good at the spectacular early in his career – played a disciplined run-with role against the brilliant Greene and kept him to three possessions in the first half. Thomas went everywhere with him, even to the bench, and led his young Carlton teammates by example.

Ward and Cripps were interesting given the Blues' Matthew Kennedy would try occasionally to get to the Giants co-captain, while Taylor – 19 years old and with just seven AFL games under his belt – did himself proud keeping up with Curnow's athleticism.

McKay thrilled in the second quarter as the Blues had their most combative period. He kicked two goals early in the quarter to go to three majors in a half, the third of which came courtesy of a beautiful kick by Polson.

But after that it got fairly ugly. That's because Kelly reigned supreme across the midfield and was seemingly involved in absolutely everything positive for the Giants. His kicking inside 50 looked simple but it did so because he found so much space out of stoppages due to his powerful and well timed running. Carlton had absolutely no answer for Kelly, let alone anyone capable of getting free on the outside at all themselves given Zac Fisher was missing through injury.

In the first half Kelly had 20 disposals, eight clearances, nine score involvements and three direct goal assists – a stunning half of work.