American Brooks Koepka has climbed to No.2 in the world golf rankings after winning his second major of the year at the PGA Championship, while Tiger Woods and Australia's Adam Scott enjoyed significant climbs courtesy of their second and third-placings respectively.

US Open champion Koepka, 28, held off stiff challenges from Woods and Scott to clinch the third major of his career at Bellerive Country Club on Sunday and put pressure on rankings leader Dustin Johnson. 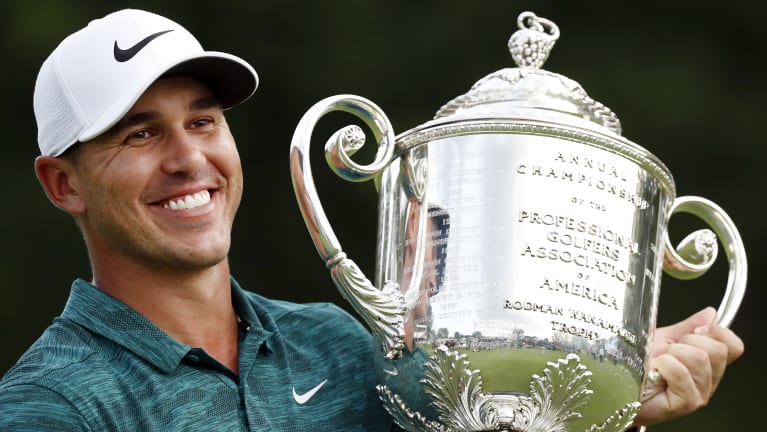 On the rise: Only one golfer now stands between Brooks Koepka and the world No.1 ranking.

Koepka's efforts took him past Justin Rose and Justin Thomas to now only trail Johnson, who reclaimed top spot back in June.

Former world No.1 Woods was in the running to claim a record-equalling fifth PGA Championship and his first major since the 2008 US Open, but fell short by two strokes. He continues to surge in the rankings, however, climbing 24 spots to No.26.

When Woods withdrew after the opening round of the Dubai Desert Classic in February 2017, he had fallen all the way to No.674.

The 42-year-old American subsequently underwent spinal fusion surgery, but has been showing gradual signs of the sublime form that has earned him 14 majors.

Scott, another former world No.1, enjoyed the biggest rise of anyone in the top 100 following his exploits over the past week, surging 31 places to No.45.

Jason Day remains the highest-ranked Australian, steady at No.10 in the standings, with compatriot Marc Leishman rising one place to No.17.