Cricket Australia's interim high-performance chief Belinda Clark has given coach Justin Langer a tick of approval for his first season on home soil on the same day a senior player said the national team had reclaimed the support of junior fans.

Langer's maiden campaign in Australia is done, one in which the host nation was beaten 2-1 by India in both the Test and one-day series but regrouped to thump a struggling and undermanned Sri Lanka side in a short Test series. 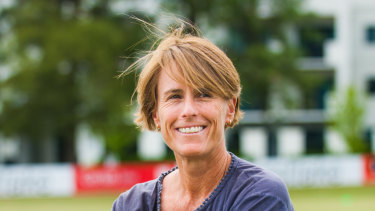 There has also been cultural change to implement and the shadows of suspended pair Steve Smith and David Warner to deal with, coming as Langer had admitted to being surprised by the public and media spotlight on team selections and the velocity of criticism.

Langer, described as a "bit of control freak" by great mate Ricky Ponting, has also had to find a way to handle and harness the different personalities in the dressing room, including coaches. Bowling coach David Saker and Cricket Australia parted ways last week, Saker and Langer having not always seen eye to eye.

As he prepares fortwo big events this year – the World Cup and an Ashes tour – Clark has backed Langer to help Australia vault up the rankings.

"He has had a couple of overseas tours, he has now had a domestic summer, he is now about to go overseas again. It takes a little while to understand the scope of the role. It's a big job," Clark said.

"He is doing really well and I have really high hopes where they can get to as a team through not only this series in India but into the World Cup and the Ashes. He is on the right path, direction is fine and people are behind him which is really important."

Test skipper Tim Paine, in conjunction with Langer, said this summer had also been about regaining the trust and respect of the Australian public in the wake of the ball-tampering scandal in South Africa.

Fast bowler Josh Hazlewood, from the NSW town of Tamworth, said the team had gone a long way towards achieving that.

"To be honest, I don't see it [public dissatisfaction] when I get back to places like this [Tamworth]. Even in Sydney at schools and things, it [loss of respect] might have been at that exact time [of the ball-tampering scandal] but it has now moved forward pretty quickly and all the kids are still loving cricket and want to play and want to be like their idols who are here today," he said, while confirming players had contributed $30 million to grassroots cricket.

Clark has won considerable support for her collegiate approach to dealing with state associations and their concerns, which were made clear in the Longstaff review released in November, and also through general chat.

Her predecessor Pat Howard, who initially stood firm but later stepped down after the report was released, had polarised cricket officials across the country, in part through his manner and also through the changes he had brought to the high-performance program, including releasing players through Sheffield Shield matches.

The wide-ranging responsibilities he had could be narrowed when a new appointee is named, for Clark does not want the role permanently.

There has been speculation Langer's role as coach and selector could be more influential than that of the high-performance chief but Clark said: "I am not sure anything will be changed there".

Clark added: "He [Langer] is doing a good job. I have been absolutely thrilled with how he is going about things. Players are responding well. Big job – he is doing it really well."

However, there could be change in terms of the managerial side or scope of the position, which included the senior men's and women's programs and pathway programs.

"We are working through that as well. That will, obviously, be part of it before we go recruiting," Clark said.

State associations, and the Australian Cricketers' Association, also want state development pathway programs to have greater input, rather than the focus primarily being on the centre of excellence in Brisbane.

CA and a recruiting agency are handling the search for a high-performance chief but interviews have yet to begin.

"There have been people that have expressed interest but we will be in a position very shortly where we can go out to market and recruit."