Home » Sport » Lessons to be learned from drubbing: Bolton

Carlton's fledgling midfield group will learn plenty about what is required to play top quality football after their exposure to the powerful Greater Western Sydney Giants engine room on Sunday, according to Blues coach Brendon Bolton.

The Giants hammered Bolton’s men by 105 points, largely off the back of incredible performances by Josh Kelly, Stephen Coniglio, Callan Ward and Jacob Hopper, which Bolton described as the most powerful running midfield as he'd seen all season. 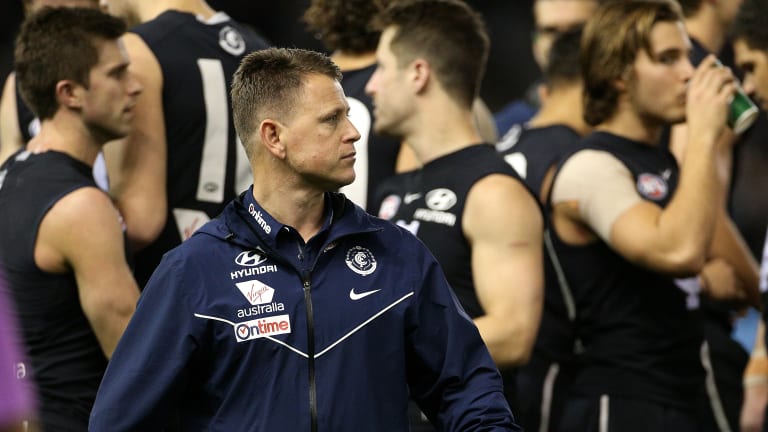 Reflective: Coach Brendon Bolton knows his Blues still have work to do before they can match it with the best.

"We just played a serious contender. It's a fantastic template for our mids to understand the running power required," Bolton said. "They spread really strongly off our young mids and they outnumbered in the forward line and outnumbered in defence. That's the level our guys need to aspire to."

Bolton said he and his coaches didn't try to throw extra players up forward, in the middle or down back to stifle GWS, so as to give his players the best learning experience possible.

"We could have put copious amounts of numbers behind the ball," he said. "And when the game was probably out of reach, and even a little bit earlier than that we kept the numbers fairly even. Not so much at the centre square bounce but after that, and it gives a great feel for a Paddy Dow what it's like to run next to a [Josh] Kelly for a while. I wanted our players to learn from this opportunity, despite a blowout on the scoreboard, to feel what running power is required.

"We never, ever accept any loss. However, any loss is a great learning opportunity."

GWS had four injuries and thus no rotations in the last quarter. They played with 17 men at stages, and on one occasion 16, and still outscored Carlton seven goals to one in the final term.

Bolton said GWS began playing a possession game at that point and his players made the mistake of guarding space and not their opposition, meaning they couldn't pressure the Giants, who ran rings around Carlton with their glut of easy uncontested ball. This was a failure in their ability to adapt, he said. Bolton was also angry with what happened in the second quarter. 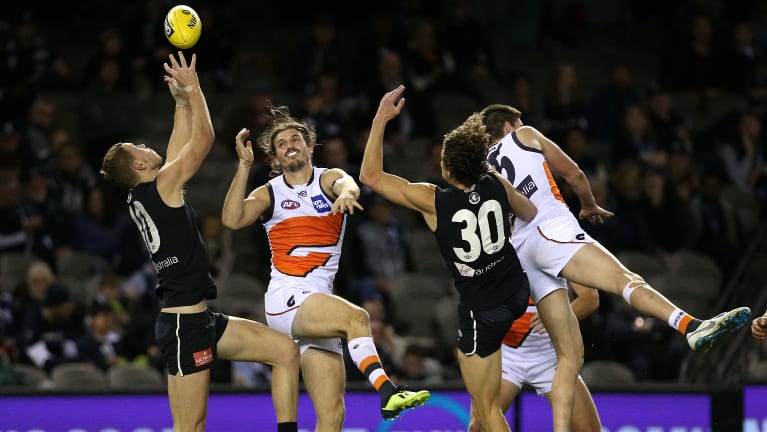 Wild about Harry: Young Blue Harry McKay marks at the back of the pack under pressure during Carlton’s loss to GWS.

"The most disappointing part for me and the coaches and players today was we got back in the second quarter … and they banged on five late ones. We have got to look hard at that," Bolton said.

"Their running power got away from us, they scored from stoppage spread and on the turnover."

Young tall forward Harry McKay kicked three goals for the afternoon. He was dangerous on the lead, took a powerful contested mark and showed nice poise for his first goal, a dribbler from 30 metres out.

"He's got a bit of work to do on his set shots," Bolton said.

"[But] that's probably the best output we have seen from Harry this year. It's no secret he has had continuity of games … you can see his agility and marking power. Still needs to work on his defensive game, a heap to do."