It wasn’t a totally convincing training run, but Richmond superstar Dustin Martin did enough on Thursday to back up coach Damien Hardwick’s confidence that he will play on Friday night.

While Martin was able to run a lap with the main group and join in training drills and some kick-to-kick, he did seem to be a bit proppy and ginger at Punt Road Oval ahead of the blockbuster preliminary final against Collingwood at the MCG. 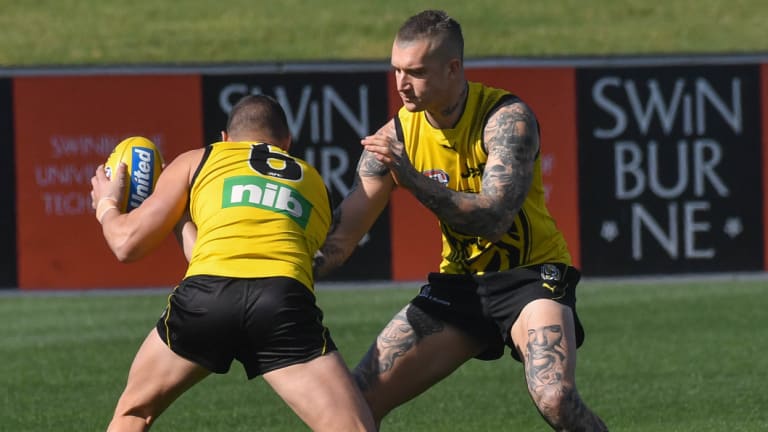 Dustin Martin has been low-key at training this week.

The Brownlow medallist, who has been battling a bad corkie which bled into his knee and almost required surgery, trained within himself, taking short steps as he ran and didn’t explode into full speed as often as his teammates did.

After 30 minutes, which also involved some one-on-one contests with captain Trent Cotchin, Martin left the track but not before signing a stack of autographs and posing for numerous photos with Richmond fans, of which about 2000 were in attendance.

Alex Rance (foot), Jack Riewoldt (foot), Daniel Rioli (finger) and Dan Butler (ankle) , who hasn’t played since round 16, also took part in training and will be available for selection.